Hummocky and Erratic at Hartman Creek

The fall color on the drive from Door County toWaupaca actually got less and less, and I was worried I'd be camping under a canopy of green but the trees at Hartman Creek State Park are just starting to hit their stride.


The campground is laid out nicely, but I wouldn't say it's "big rig" compatible.  The shower building looks older but the showers themselves have been re-tiled and fitted with new shower hardware, including a faucet that stays on which is a rarity in our state parks.


The Ice Age Trail passes through Hartman Creek State Park and is an example of outwash from a melting moraine that formed hummocky topography that wasn't as difficult to walk along as in the area of eskers.  Most of it was fairly level, with some hills making sudden appearances here and there.  The outwash included lots of erratics, and the IAT winds through them and the trees. 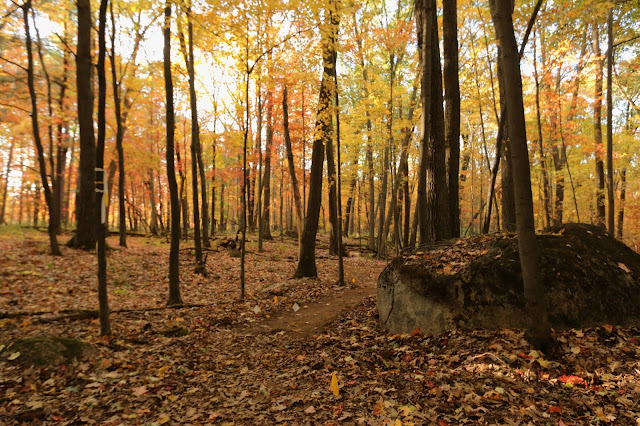 A crew is out working re-routing the trail as you can see in the above photo, but I missed them for the day since I didn't get out there until almost 5:00.  That's okay with me, I prefer my forest quiet except for the rustling of the treetops in the wind and the patter of chipmunk feet as they run along downed trees.  I got in a quick hour hike before the end of the day, enjoying the fading sun peeking through the trees.  I tried to catch it so I could photograph the leaves backlit, but it just kept getting away from me!


And boy is it nice to go tramping around the woods without picking up ticks or hearing the whine of mosquitoes!  I wish fall lasted just a little longer....
Posted by Pam at 3:00 PM