Tuckered Out in Cades Cove

Thursday I was ready for my big Smokies adventures to start, but first I had to take care of my laundry. 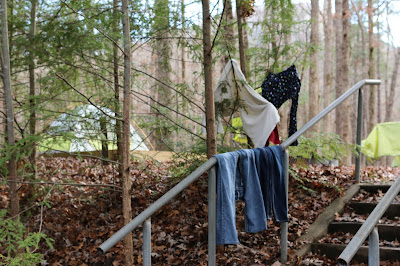 Well, at least they were clean!  The laundromat in Townsend next to the Artistic Bean looked new and shiny but cost $2.25 a load to dry, and they were still half wet after 35 minutes so on the tree branches they went.

With a campsite picked out well away from everyone else and a hike before dark on the agenda I was in a mood to find it fun and quirky. 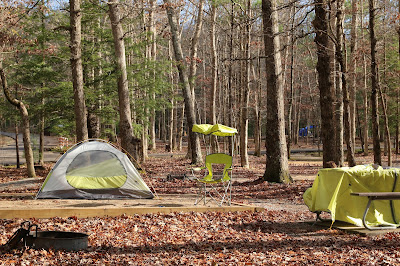 The campsites themselves are well laid out and large enough in loop C...but there isn't a lot of room between them and of course everyone wants to have their fire so I have that to think about since I have asthma.  If you are like me and want to avoid the crowds and their fires, come late in the off season and during the week.  There are no hookups, but the bathrooms were new, clean, and while they do not have showers they have flush toilets!  I was also in a mood to find this amazing, especially after only paying $17 since the place I looked at to camp at in Townsend was $40 for a basic tent site.  Who needs showers or wifi?  Well, I could live without for one night anyway. 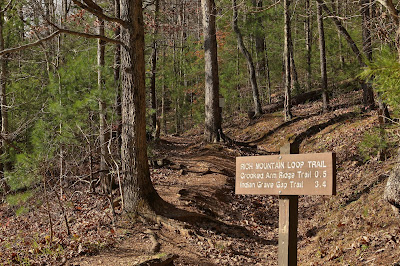 After all my errands earlier in the day I was running low on time so asked a ranger for a quick but not too easy nearby hike and she recommended Crooked Arm Ridge.  Parking is available by the Cades Cove Visitor Center and from there it is a dart across the road to the Rich Mountain Loop Trailhead. 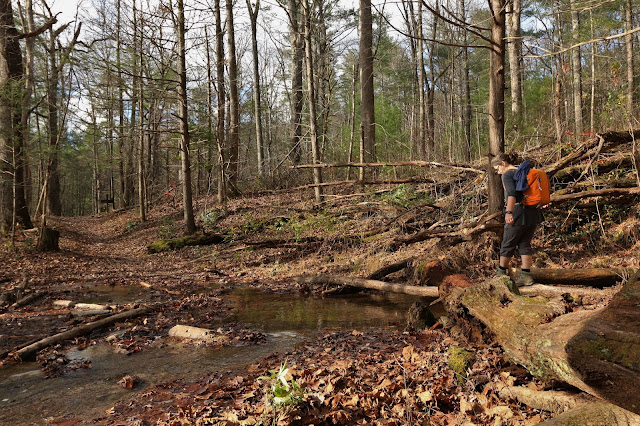 It's half a mile to the Crooked Arm Ridge intersection, with only one creek crossing of any substance to tackle.  After a closer look I was glad I had a hiking stick to help balance me up on that log!  In nicer weather I might have opted to wade, the creek was wide but shallow. 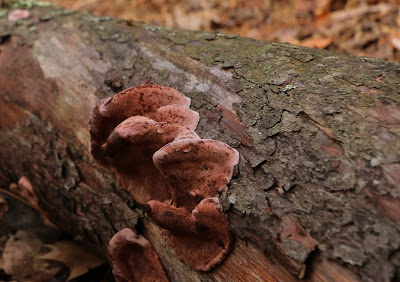 Once I made the turn I saw a few nice fungi specimens before the serious uphill ascent kicked in.  The one above had an interesting pink undertone I've never seen before, and the little goldies reflected the sunny mood I was in. 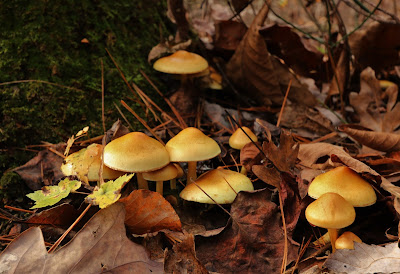 Two-tenths of a mile later I spied Crooked Arm Falls.  How do I know so precisely how far it was?  "Hiking Trails of the Smokies" is my go-to information source when I come here to hike.  Crooked Arm Falls is where I lost my brand new replacement lens cap for my wide angle lens.  Maybe I need to be buying those lens caps by the dozen.  This time it just flipped out of my hand as I reaching to put it back on the lens and down the waterfall it went.  Not the first time, won't be the last. 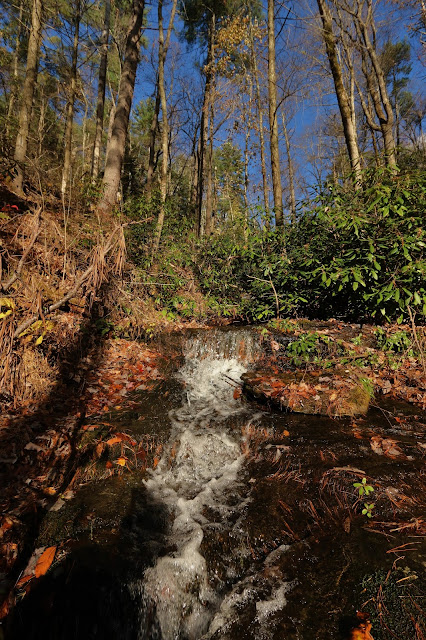 The ascent of this trail is steep, gaining 670 feet every mile.  It consisted of switchback after switchback, with some spots quite churned up by horses trying to keep their footing. 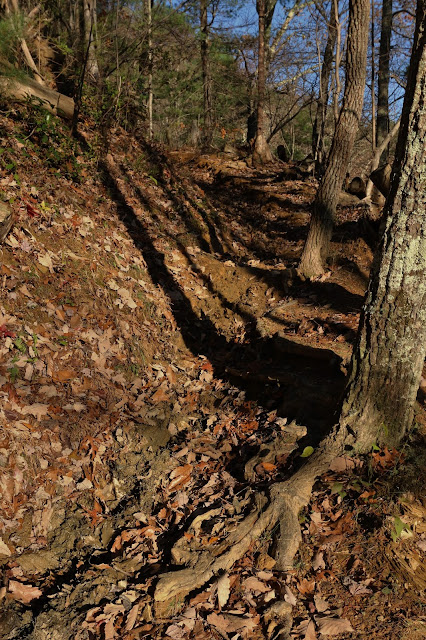 Horses only passed me once, and I saw very little droppings.  Wasn't that nice of them to hold it so I wouldn't have to step in it? 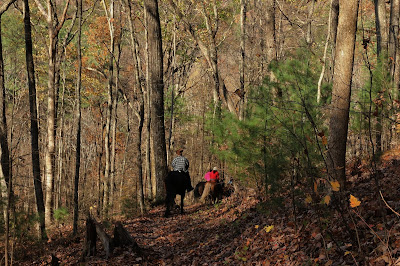 I huffed and puffed, and trudged and turned, climbing for two solid hours.  But the great views that the guidebook kept promising were clogged with trees so perhaps the information is out of date and forest growth has exploded.  I made it to one spot where I got a good view before I had to turn back.  More views might have awaited me, but smart hiker-gals get off the mountain before dark.  Two hours up meant one hour down and that was about all the time I had left. 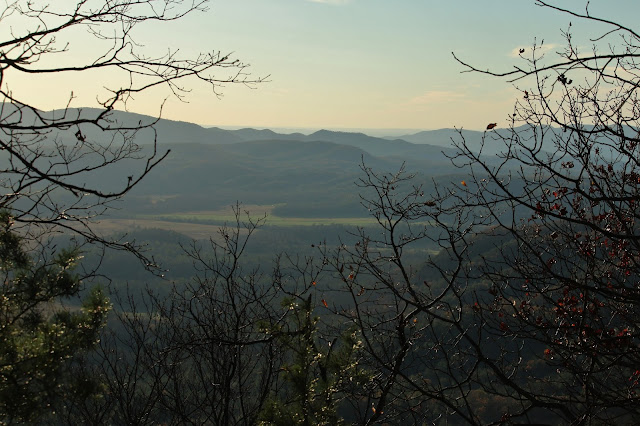 In some of the gentler spots I broke into a light jog on the way down, catching a little late day light on the few trees that still had a touch of color left.  The churned up clay with leaves on top made for a spongy descent that was very forgiving on my joints! 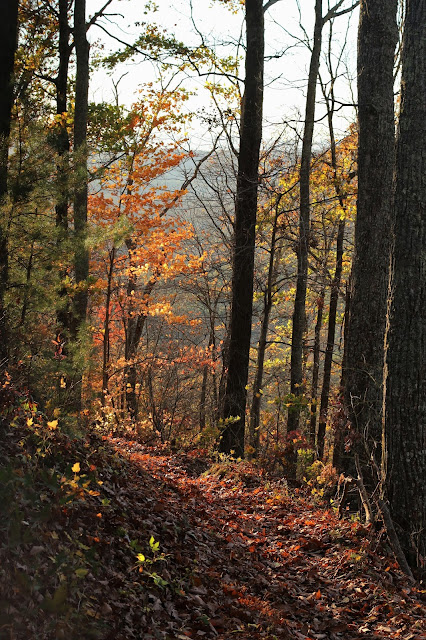 I wish I'd had more time to look at leaves, the guidebook mentioned Chestnut Oak but all I got a picture of was this leaf that turns out to be Northern Red Oak.   Looking over the different kind of oak leaves it was surprising to me the many different shapes they come in, not just the typical "oaky" shape variation that I would have thought. 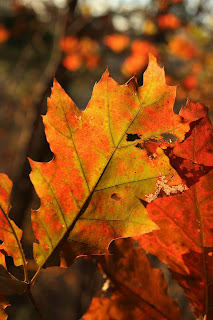 Back down on Rich Mountain Loop I cut out of the woods and into the field, catching the last few minutes of daylight.  I walked through the field, mindful to not crowd the turkeys too much.


But as soon as I hit pavement I noticed movement in the next field and when I zoomed in with my camera I got to see a coyote making its way toward the stables.  It stopped once to pounce on something, but I don't know if it got what it was after since it was just a little too far away and light was fading fast. 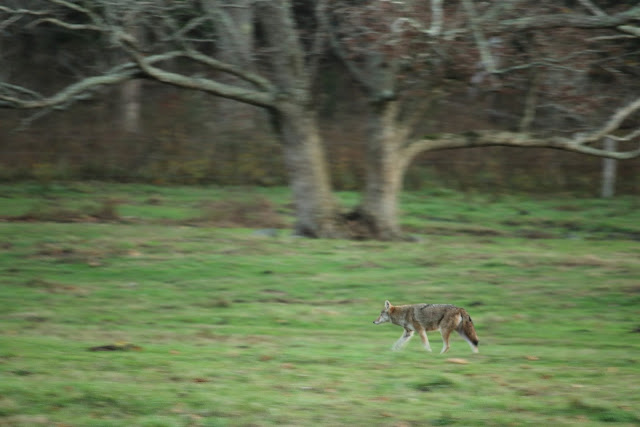 I chatted up a few folks on the road as I made my way back to the car, and looked over my shoulder for one last glimpse at the sky. 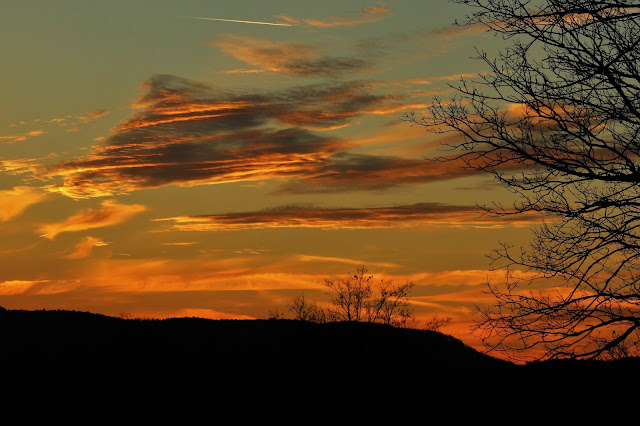 Back at the campground the adventure had just begun.  My site was filled with smoke since the wind direction had changed so I grabbed my tent as-is and dragged it as far from the smoke as I could.  It was surprisingly easy to pull behind me even with my stuff inside, but I can only imagine what a sight I must have been to any campers who caught a glimpse of me.

By the time I got in my new spot light was practically non-existent and as I stood up next to my car having a last snack a bear ran across the road and stopped and looked at me.  Well, it was bear shaped and moved like a bear anyway.  Moments later a deer did the same thing and before I went to my tent another bear came through the same spot again.  I'm guessing a game trail was nearby, most likely I was the only camper to catch the after dark show!  All excitement apparently finally done for the day it was time to tuck my tuckered out self in to my sleeping bag under a sky that sparkled with stars.
Posted by Pam at 5:50 PM