Southeast Arm Kayak and a Bit of Scottish History

I don't get many comments here on Nomadic Newfies, but I did get one recently comparing the Highland Clearances in Scotland to the Resettlement program the government instituted here in Newfoundland in the 20th century.  The reasons and timelines quite different, but the end result the same that areas that were once homes soon became empty and reverted back to nature.


My curiosity of course was awakened and I did a bit of reading on the Clearances.  From there I did a bit of research because I know that the Scottish did emigrate here to Newfoundland though not in the large numbers exhibited by the English and the Irish.  So, a little Scottish population background to go along with my photos I took on my first kayak journey in the waters of the Southeast Arm just steps from our new home!


I got the following information from Heritage Newfoundland and Labrador website:

"...it was not until the 19th century that Scottish migrants settled at Newfoundland and Labrador in significant numbers. These were the Lowlanders who settled on the island's east coast from the early 1800s onwards to take advantage of the colony's quickly growing fishery, and the Highlanders who emigrated from Cape Breton to the Codroy Valley and St. George's Bay in southwestern Newfoundland between the 1840s and 1860s."

I'll make a quick note of my own here to establish that until the 1800's a large portion of the population in Newfoundland was "temporary" due to its status as a British colony engaging primarily in the fisheries. Families did settle here in the 17th and 18th centuries but not in substantial numbers. In Placentia Bay in 1825 only 61 % of the population were permanent residents. The province as a whole was settled mostly by British, Irish and Scottish - Placentia Bay was one of the "Irish areas" that many emigrants settled in. (source: "The Peopling of Newfoundland")


"Some Scottish settlers introduced important and far-reaching changes to Newfoundland and Labrador society. Physician and political reformer William Carson, for example, successfully campaigned for representative government in Newfoundland and Labrador, which allowed the public to elect its own government. He also helped to open the first civilian hospital at St. John's in 1814."


"The work of Scots-Canadian contractor Robert G. Reid dramatically altered Newfoundland and Labrador's society and economy. Reid's trans-island railway revolutionized transportation and communications in Newfoundland by linking isolated outports to one another, and by connecting them to larger centres. Instead of travelling by boat or foot, residents could reach distant villages by rail in hours. The railway also opened up the island's resource-rich interior to industrial development, allowing new forestry and mining operations to diversify Newfoundland and Labrador's economy into areas other than the fishery."


And there you go, a short history of Scottish emigration to Newfoundland! As short as my kayak ride to my cousin's house down the Southeast Arm. 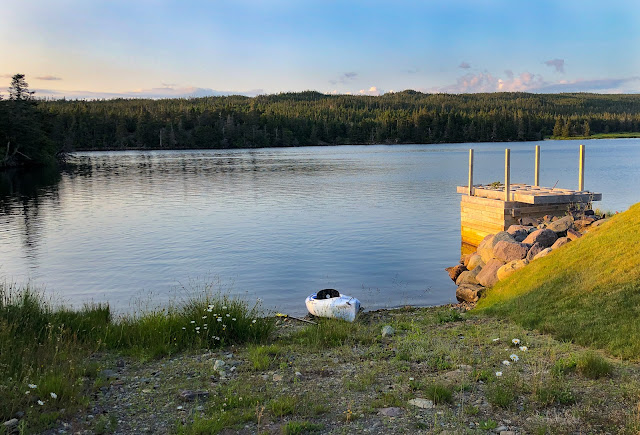 After visiting with my cousin and his family for half an hour I got back in my kayak to catch sunset. 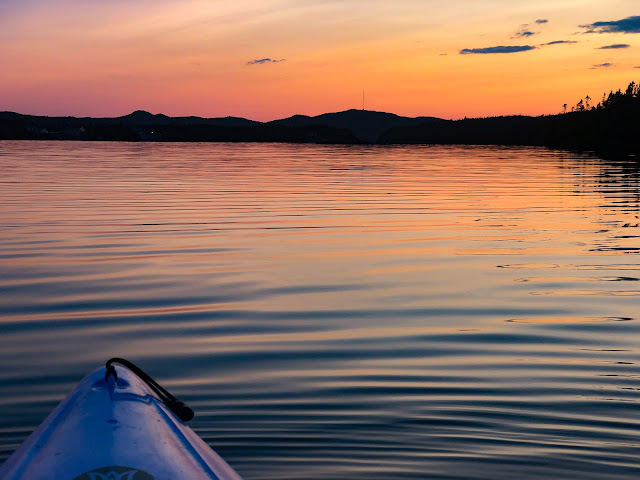 The water was smooth, the air was warm but comfortable, and not a mosquito or fly hovered around as I paddled my way back home.  I haven't been disappointed by summer in Newfoundland yet, though if you like "heat" in the summer it's not the place for that. 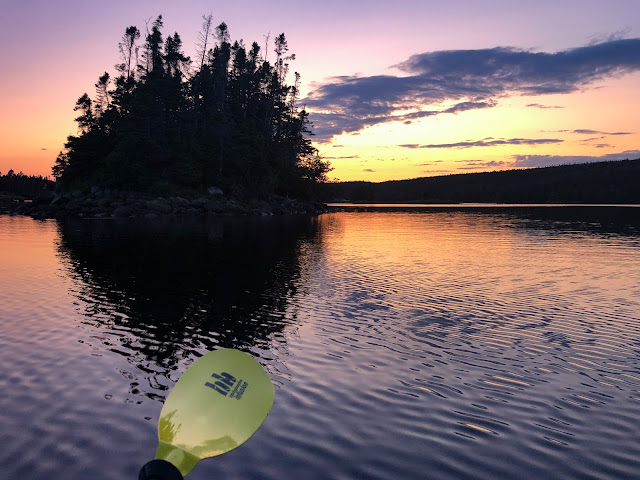 There has been so much going on that I haven't been back out, but the next calm evening that comes around I'm going out again to investigate a bit more! Here's a 12 second video showing just how calm and quiet it was when I made my way back at sunset.