Is it April yet? (and other unrelated musings)

Is it April yet? Is it April yet? This is the primary thought running through my brain for the last couple of weeks. We are in the final countdown for our first trip of the season in April. Camper is waxed, carpet ripped up out of the living room (yay!), we are awaiting delivery of two new recliners to replace the sofa sleeper, everything has been cleaned and the packing has even begun. 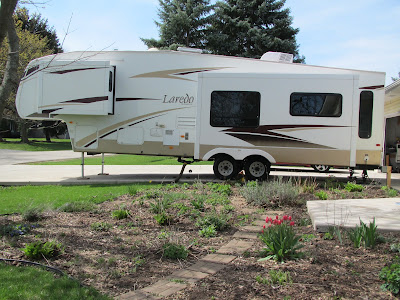 When Wayne retrieved our fifth wheel from storage I put my arms around it (well, you know what I mean) and said, "I missed you!" My affection does not extend to naming it, however. I just can't anthropomorphize inanimate objects. I don't know if this indicates a lack of imagination on my part or if it's just another symptom of my innate practicality.

Speaking of my innate practicality, I've spent some time recently pondering our culture's elaborate death rituals. The amount of work, time, and money that goes into saying good-bye to a loved one these days honestly just baffles me. I can't figure out if it's a guilt thing (if I don't do this, that and everything else it won't seem like we loved them) or if it truly makes people feel better about the passing of their loved one. The many details involved in the visitation, funeral and interment don't stop there but seem to continue with donations of items and to charities, and then drags on into thank you cards and other obligations. Most of these rituals do not seem to be religious in nature and seem to get more elaborate as the decades go by. I personally have informed my family I want to either be donated to medical science or cremated and to have no kind of public service at all. Let my closest family members gather and mourn together afterwards, without worry about a checklist of things that need to be done and whether or not to spend money on things I certainly won't need once I'm deceased. Why does my brain see ceremonial ritual as something unnecessary and to most others it seems as natural as death and life itself? Am I cynical and cold-hearted or just realistic? (And how can someone who has been described as "perky and bubbly" also be such a sourpuss?)

I've noticed the same trend with modern day wedding ceremonies. We had a very simple and inexpensive ceremony thrown together in just 2 weeks with a few friends and relatives attending and a small luncheon afterward. We did not start our marriage off with any debt related to the ceremony and have been happily married for 22 years. Weddings these days take a year or more to plan and are so expensive that most couples either start their life together in debt or put their parents into debt. Why? Why the need for a day so "special" that the marriage itself isn't thought about all that much beforehand? The stress I see all involved in the planning stages going through does not seem logical to me, and certainly doesn't seem romantic. The union is what I think matters, not what the guests thought and all the money that was spent.

And along those lines, we're back to the thought of the life of the free-wheeling nomads we want to be. What do we need all the possessions involved in owning a house for? The people in our lives are getting used to the idea of the lifestyle we want to soon be leading, but I don't think they really understand. For many it's hard to comprehend that to us the freedom to go where we want for however long we want and spend our days doing what we love is more important than money or status symbols. Give me a day spent exploring the world with my husband at my side and a simple home cooked meal at the end of the day in our home on wheels and I am one happy Realist!

P.S.
To round things out, I will also cheerfully admit to being a killjoy when it comes to other common rituals such as the gift-giving and other ceremonial aspects of holidays and birthdays. The only holiday we do much of anything for is Christmas these last few years. Once the kids weren't little anymore I just didn't see the point in it. Gee, aren't my kids lucky to have a swell mom like me? I do like watching little kids at Easter egg hunts and will never tire of driving around looking at Christmas lights though!
Posted by Pam at 1:40 PM 7 comments: