Last post from our recent trip to Kentucky...I think. 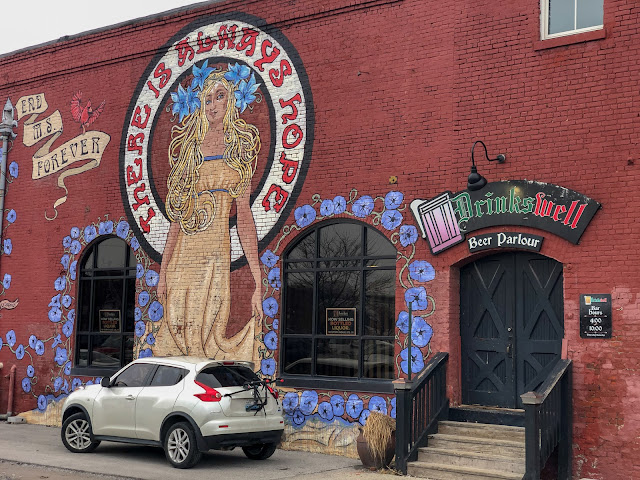 There were a few cool murals in Butchertown neighborhood of Louisville which is named for the butchers and stockyards originally located in the area. When a creek was rerouted it became a good place for the animal remains to be dumped in the creek and such businesses were banned in the downtown area for sanitation reasons. Um, yeah.


Now the area is filled with chic shops and the only livestock I spotted was the painting of a giraffe... and maybe a few painted cows and chickens.  But Katrina and I have a thing for giraffes so it gets to be the star. 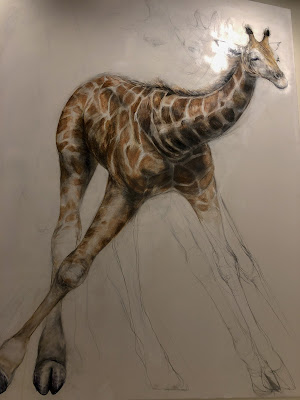 On a recommendation from the sales clerk we ate at Butchertown Pizza Hall where All cultures, races, genders, religions and people are welcome.  But not giraffes.  Only cows and chickens inside were cooked and served on a plate. 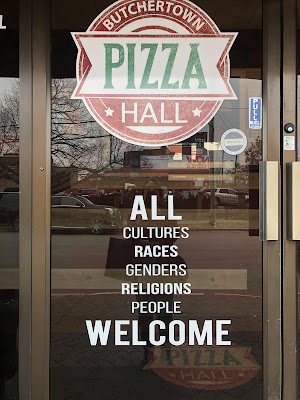 My plate came with a slice of cheese and arugula pizza.  It was so good that I've had this at home twice since then! 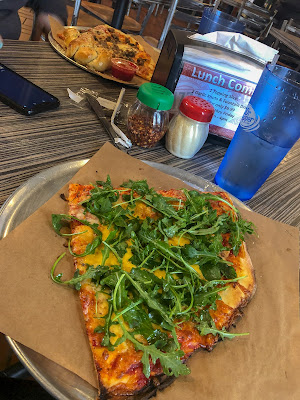 Across the street another mural telling the story of Butchertown's history from past to present. 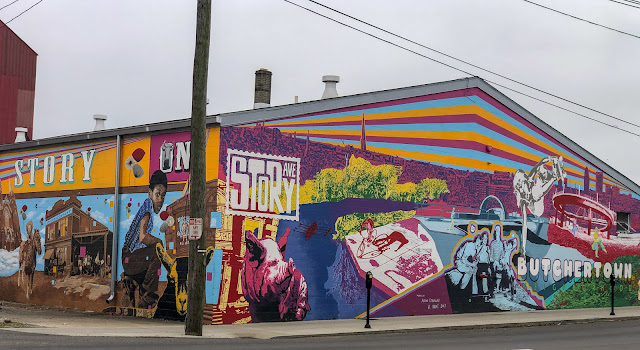 Linking up to Monday Mural.

Before the Europeans Came to Newfoundland

When Wayne and I visited The Rooms Museum in St. John's last year we saw a few exhibits with information about the Beothuk tribe of native people.


With the widespread use of DNA testing a lot of questions are being answered these days that the archaeological record alone was unable to address, making for a more complete picture of Newfoundland before the Europeans arrived. 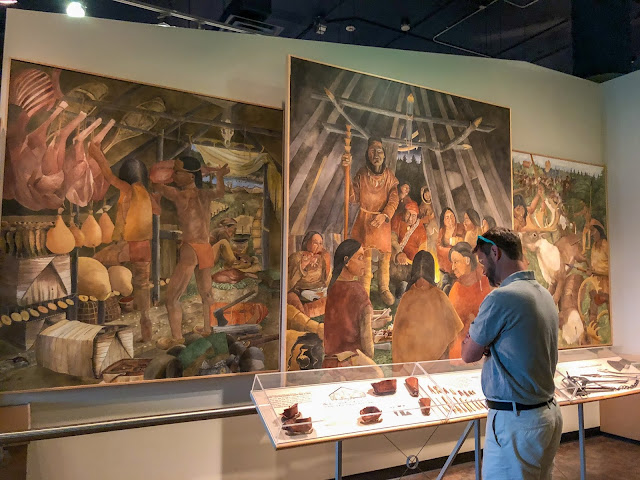 It now appears that multiple tribes may have arrived in Newfoundland besides the Beothuk and the Mi'kmaq over the centuries.  I recently told Wayne that the next time Ancestry is having a sale I'm buying a kit for each of us so we can contribute to the data being collected. 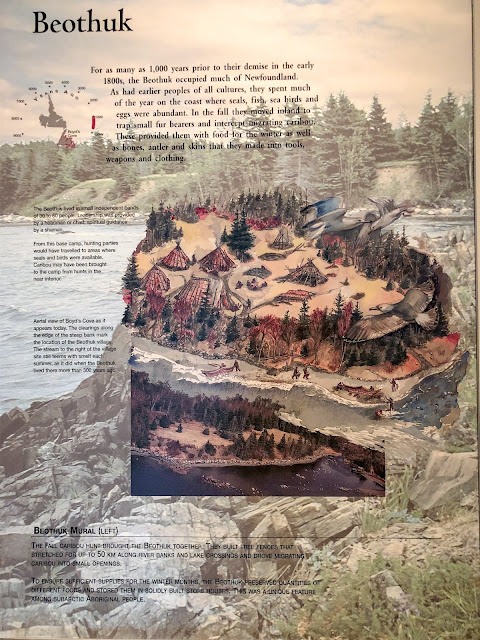 Newfoundland historians are sure to be excited these days as news of the remains of a pair of the Beothuk tribe are about to be returned to Canada from a Scottish museum.  They will journey to the Canadian Museum of History in Ottawa first before finally coming home to Newfoundland and there will likely be DNA testing performed to see if it can be determined if any Beothuk DNA traces can be found in the current Newfoundland population. 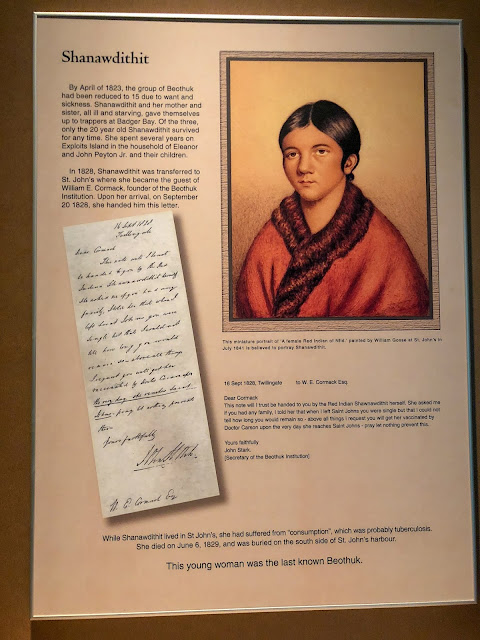 One of these persons is Demasduit, who was kidnapped by a European fur trapper in March 1819 to retaliate for an alleged theft by her tribe. Nonosabasut was killed that same year as he tried to rescue his wife, who was given the name Mary March by her English captors.

Demasduit died of tuberculosis in January 1820, and was returned to Beothuk land to be buried at Red Indian Lake. A few years later a Scottish explorer retrieved the two skulls and some grave goods, which eventually made their way to Edinburgh.  What possessed people to do such a thing? 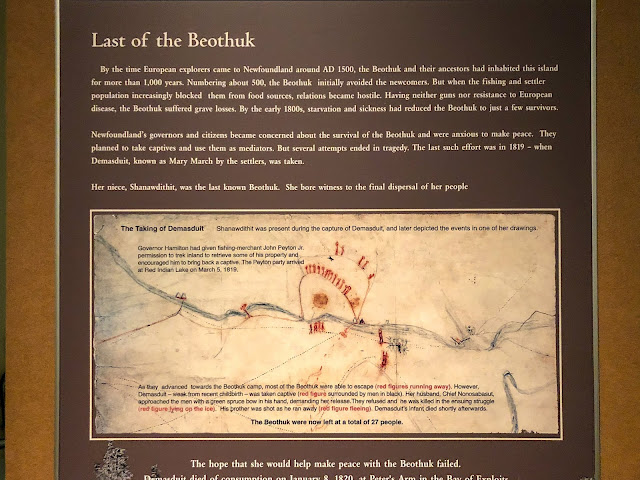 Here's a link to a nice little story from one of my distant cousins about the Mi'kmaq, which is a separate native tribe perhaps thought to originally have come over from Nova Scotia.  Unlike the fate of the Beothuk, there is still plenty of their DNA going around!  It's an interesting topic that I'm sure I'll learn more about when we move back home.

The weather has been frightful here in Wisconsin for the past month.


Poking your head outside is always a risk, especially during the recent Polar Vortex event.  Temps were down around -50F with the wind chill for two days in a row.  I cancelled all my appointments for work and stayed home, I was not risking my car not starting miles from home.


Even the U.S. Post Office shut down those days, but snow has been an issue the past month as well.  Seems like at least half a foot falls once or twice a week. 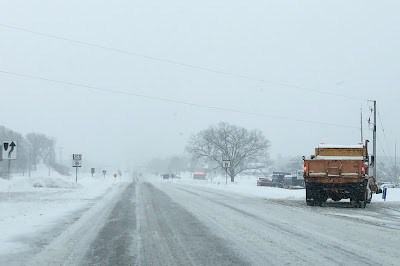 And the blowing snow can be as bad as the falling snow, leaving roads with a thin glaze of unexpected slickness to worry about. 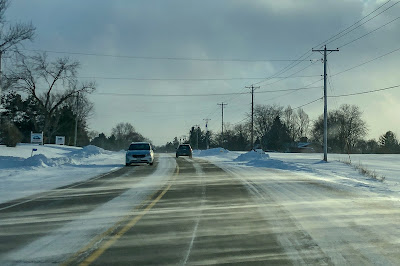 It makes for some pretty trees while I'm driving around, but I am quite tired of snow plow sightings.


I'm not the only one who has spent a lot of time indoors lately, Wayne and the cats have taken a hibernating approach to life as well.


I'm at a hotel in Appleton this morning because another winter storm hit the state, and I didn't make it home from my route up to the Upper Peninsula in time.  Snow would have been one thing but it was ice I was worried about - they were calling for up to half an inch of ice overnight south of Fond du Lac.  I wonder what the neighborhood will look like when I get home?

Where the Buffalo Roam

Buffalo sculpture with mural on its sides found outside Lafayette, Indiana. 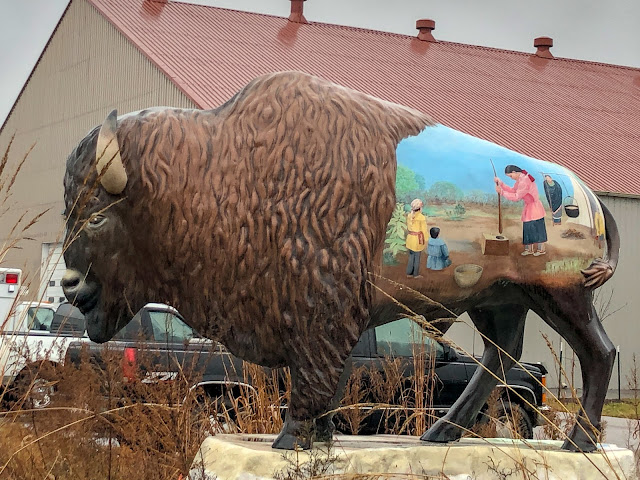 No time for chatting, just a quick link to Monday Mural today! 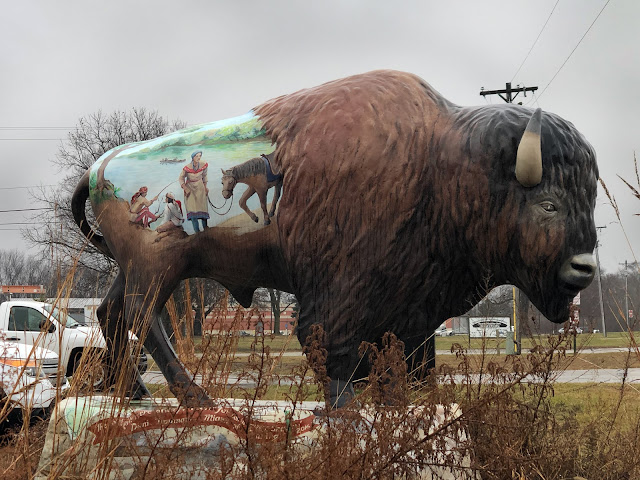 A quick tour of the Tippecanoe County Courthouse in Lafayette back in December revealed many treasures worth stopping for.  As with most courthouses I have visited this is actually the third one built for the county and was finished in 1882. Each courthouse gets more elaborate as they rebuild, with the architectural influence of Baroque, Gothic, Georgian, Victorian, Beaux Arts, Neo-Classical, and Second Empire styles. That's a lot of influence, but it seems to work. 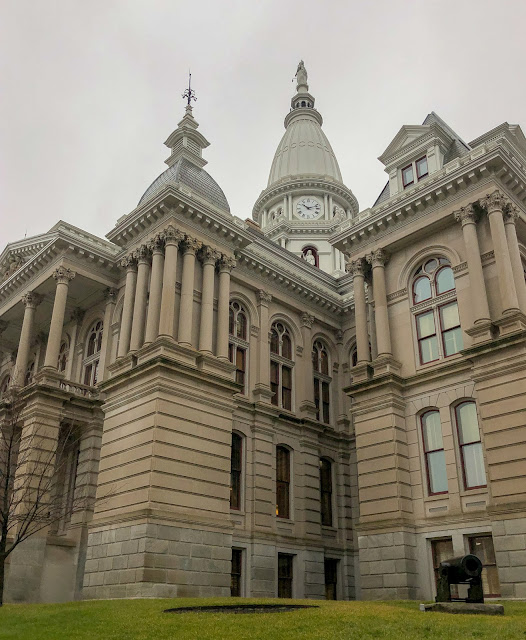 The original specifications for the Courthouse described the 14 foot statue on top of the building as the Goddess of Liberty, holding a shield and sword. The statue is now holding scales that were found in the clock tower during restoration in the 1990's. 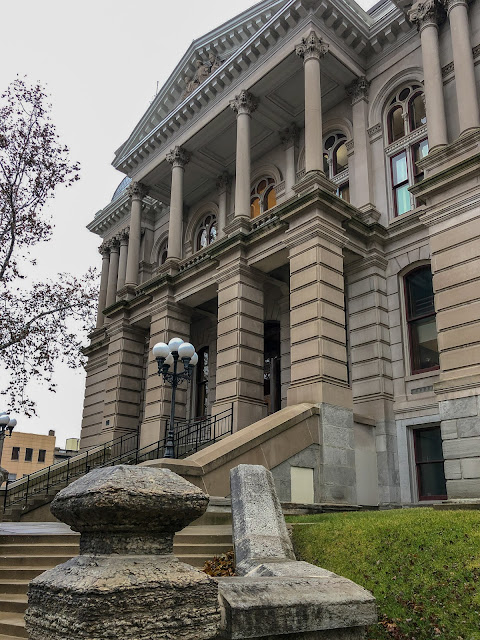 The shape of the building is a large 150 foot Greek Cross. From the ground to the top of the statue, the Indiana limestone and brick building measures 226 feet. 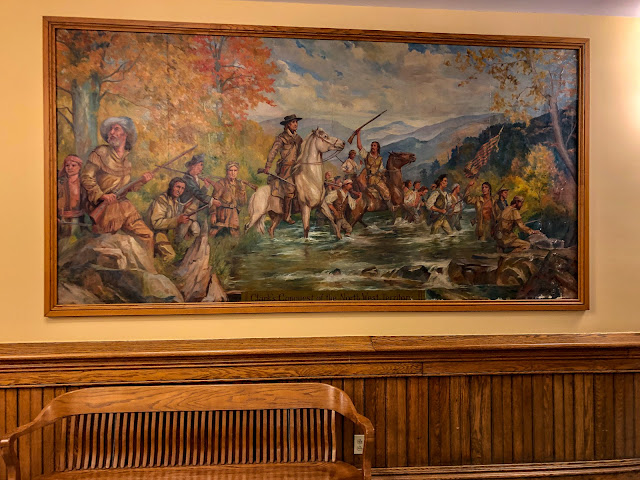 After going through security I stopped to have a look at two paintings on the first floor.  Unfortunately no description of the paintings was posted, but I eventually discovered that the painting below is the "Signing of the Treaty of Green Ville". It was painted by Howard Chandler Christy, who also painted those World War I posters showing the women proclaiming that they wish they were men so they could join the Navy.


In addition to stairs and a standard elevator the original 1906 elevator is still in operation.  I took the stairs going up, but did ride the elevator coming back down.


During the restoration a new hydraulic system was added. This elevator serves floors 1-4, public access to floor 5 is not available.  Trust me, I asked!  The fifth floor used to be the attic, but during renovations was converted to space for the prosecutor's offices and has a skylight view of the dome. 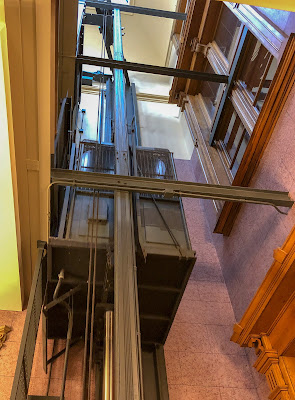 My request might not have gotten me access to the 5th floor, but it did get me a private tour where I learned a few details I would not have gotten on my own.  Like the fact that if you look closely at the moulding in one of the courtrooms you can see buckshot damage to the woodwork. 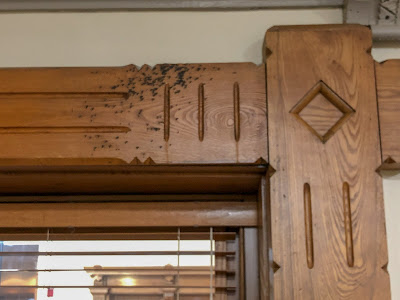 Another story that was relayed to me involved the attempted bombing of the courthouse on August 2, 1998.  An unknown perpetrator crashed a pickup truck full of gasoline and explosives through the eastern entrance of the Tippecanoe County Courthouse. Local firefighters were able to put out the blazing truck, which was when they discovered it was full of flammable materials. On August 11, county authorities placed concrete barriers around the courthouse to help prevent a similar attack in the future. The case remains one of few unsolved suspected instances of domestic terrorism in the United States. 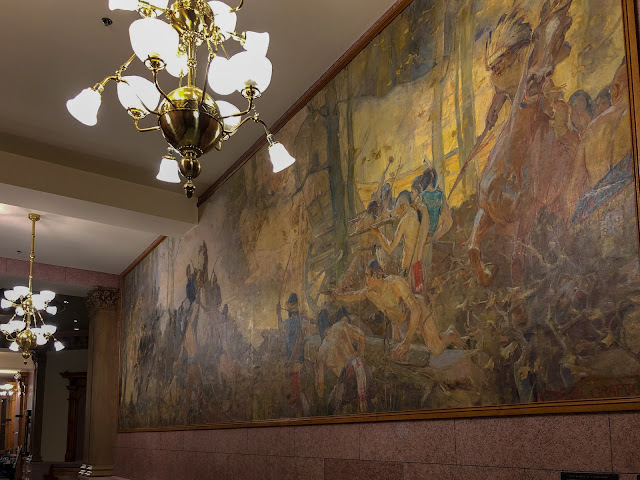 "The Battle of Tippecanoe" was painted by Robert W. Grafton.  It occupied the lobby of the Fowler Hotel until 1966 but now calls the courthouse its home.  It is 48 feet long so kind of hard to get a full image!  It needs a cleaning, I hope they are planning for that and raising the funds to bring it back to life.  I watched a video on C-SPAN about the Battle of Tippecanoe for some background information, click the link to see the video.  It was a bit dry, and I sure would have liked more information on the viewpoint of the history of the area from the Native American point of view. 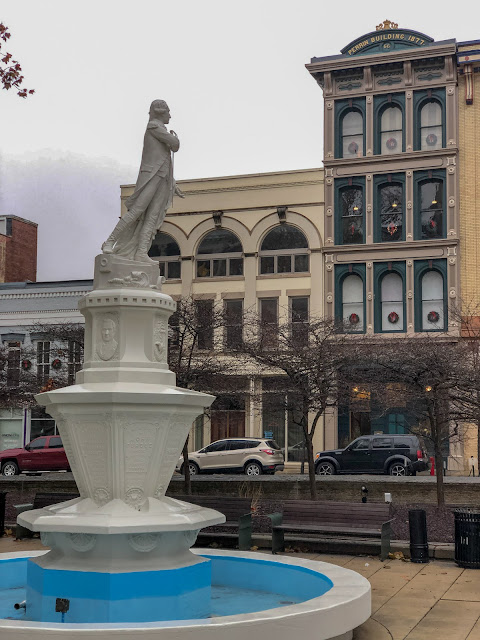 Back outside I saw a statue of the Marquis de Lafayette that was added to the square in 1887 by sculptor Lorado Taft. The Courthouse also has one hundred columns, nine pieces of statuary and a cast iron dome containing four large clock-faces and a bell. 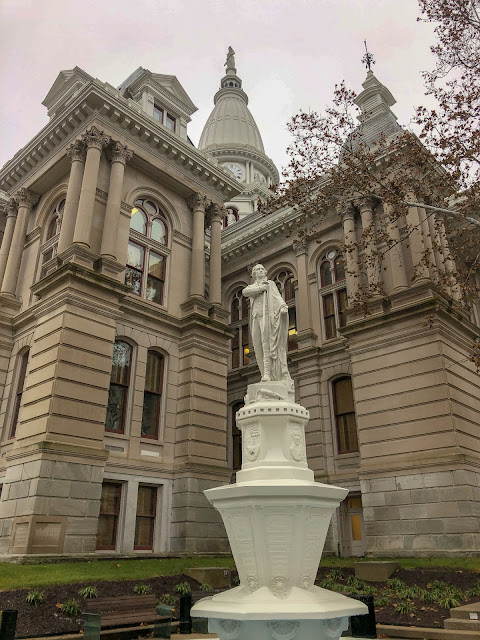 That's it for the tour, I'll fill you in on how we're faring here in Wisconsin this winter next time.
Posted by Pam at 7:22 PM No comments: