A day or two late, but as promised here is what Third Falls looked like when I went back again last month!


This time I knew where the path was, so I paid a bit more attention to the surrounding hills and woods...


As I got closer to Third Falls I stuck to the right side of the brook instead of crossing over to the end of the path.

Not much to be done about a straight drop off a cliff, but the other side of the brook was accessible with a little careful manuevering.

As I said, the drop is about six feet, so after I got to the boulder I just had to find a few handholds and clamber up to see what was beyond the falls. 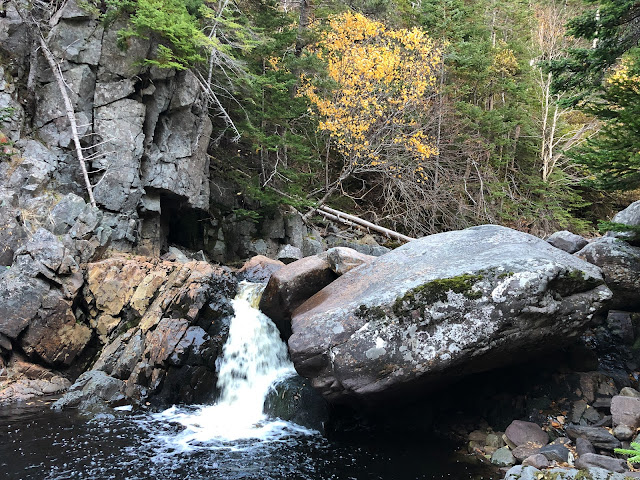 Hey, look at me!  Exploring new places!  This is where Wayne would roll his eyes and tell me I'm such a weirdo. 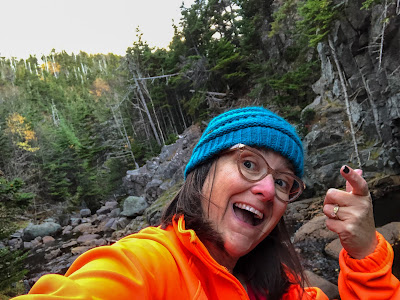 He may call me a weirdo, but if I left the house without an orange jacket this time of year I'd have to hear a lecture about how he doesn't want me shot because someone mistook me for a moose.  I'm pretty sure he loves my kind of weird. 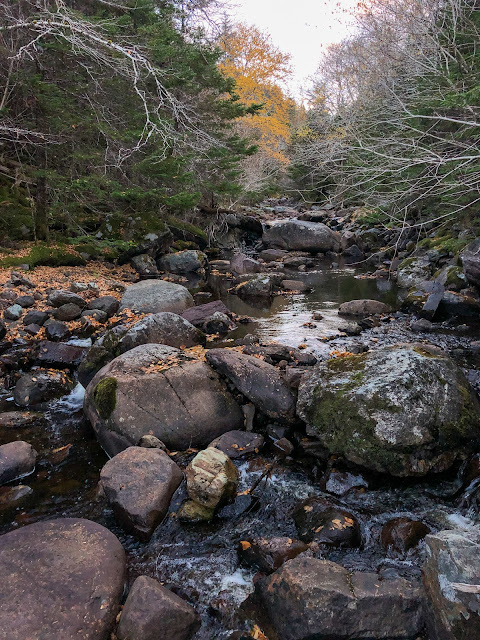 What was beyond the falls?  More water, more rocks, more woods...

Picking my way over boulders and ducking in and out of the woods...someone sitting at the end with a cup of hot tea and that sums up a dream hike! 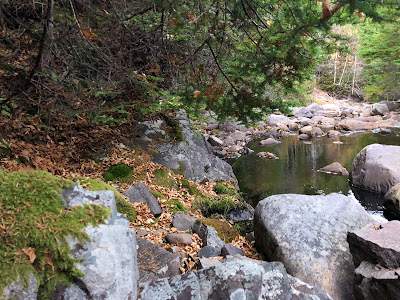 Undeterred when the rocks would disappear, I picked over fallen logs and pushed aside tree branches because I heard more water falling ahead. 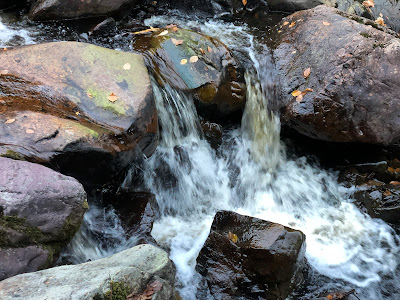 In the Midwest we called it a cascade, I'm sure they call it something else here.  Either way, it was a nice reward for my efforts.

But once again daylight was starting to fade and this time of year it goes a lot quicker. 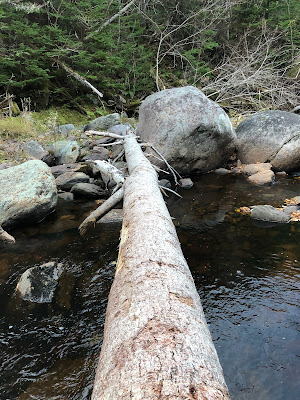 I thought about crossing the tree...even got on top of it before having to scoot backward awkwardly because I could tell I was more likely to fall off than stay on!

Every time I drove to our new home this summer I noticed a little pull out on the side of the road and a path leading to the woods. 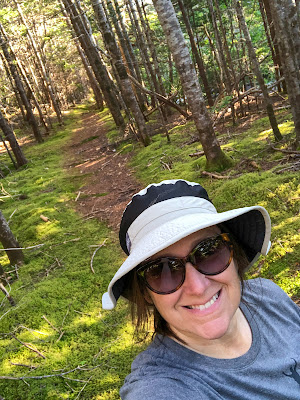 Eventually I got around to checking it out. Not sure of the name of the brook flowing along the path but at the time the water was low. 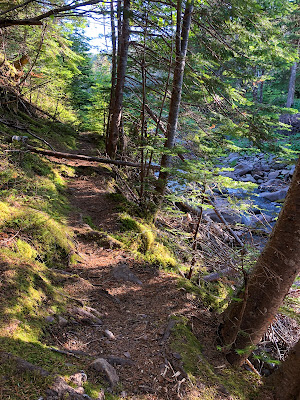 Which was a good thing because when the path ran out I had to make a crossing to keep going. 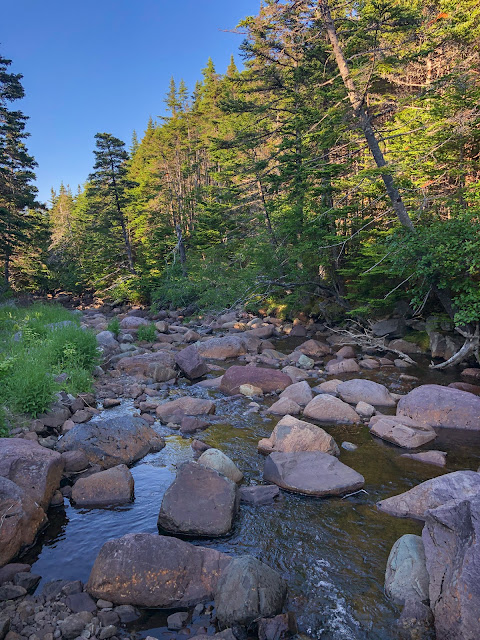 Sure enough, there was a path on the other side! Not very wide but man made and not just a moose track. 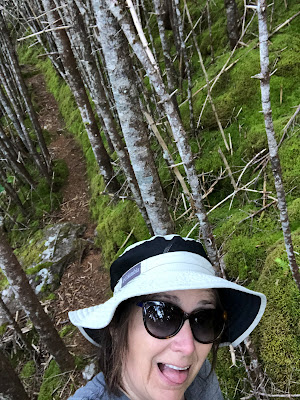 It was getting later in the day and the light was making lovely reflections as I continued alongside the water. 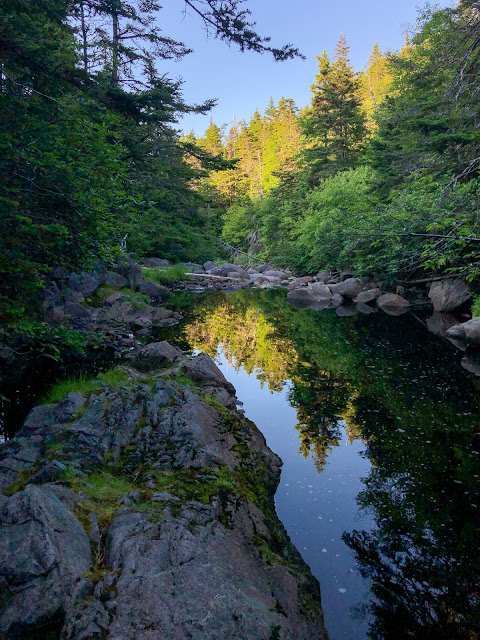 Once again I had to make a crossing to continue on. 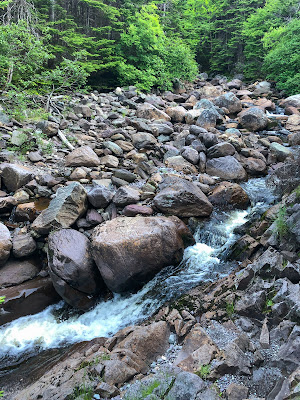 But it was a fun spot to stop and watch the water rush along by my feet! 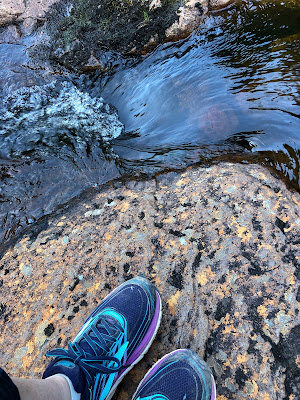 A few more minutes through the woods and I came to a sudden end atop a rocky outcrop.  Overall I'd say it was probably 3/4 mile walk in to the falls. 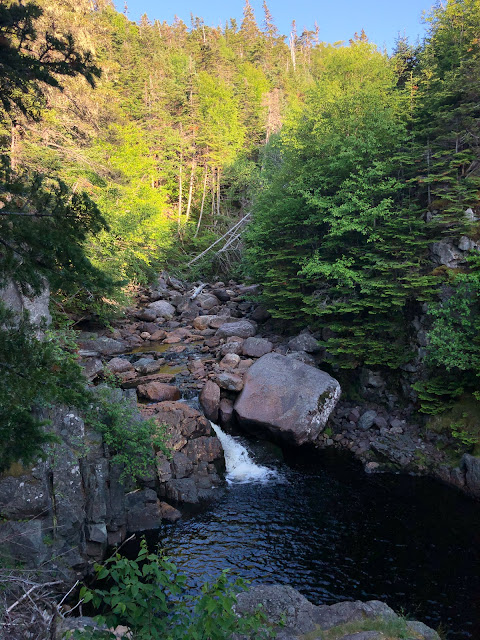 My guess was a local swimming hole and sure enough when I got home Wayne said I had found Third Falls and they used to go swimming there as teenagers.  The falls is a little taller than it looks in the photos, but still maybe around 6 feet.  I went back another time in October and approached from the other side, I'll post the pictures tomorrow for comparison!
Posted by Pam at 6:52 AM 2 comments:

A Plethora of Puffins

This post if from a trip to Elliston back in July

Back in July when I decided on the spur of the moment to take a quick road trip out to Elliston, I considered myself lucky to get accomodations on a summer night with no notice. 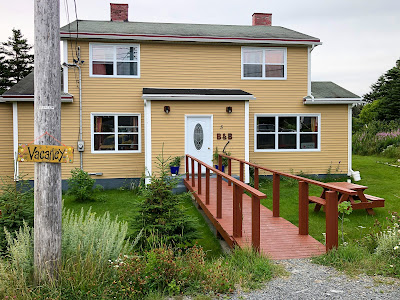 That being said, when we (myself, my cousin and her daughter) got to the Meems B&B around 9:30 we were met with a very frosty attitude and told not to make any noise. At 9:30. The room was $150 and while it was clean it was not modern, and the shower was too small to attempt to use.


At breakfast the jam collection was wonderufl, but toast was stale and unappetizing, and scrambled eggs smothered in chives and paprika were served along with the suggestion of beans.  When we all declined beans she made a face at us like how dare we refuse her food? A large bowl of homemade yogurt sat in the middle of the table.  It was just weird. Not a typical Newfoundland offering, or a typical B&B breakfast. The owner wasn't just borderline rude to us, I heard her do it to other guests as well.  My suggestion is stay in Bonavista and make the short drive to Elliston.


Another thing is there is a complete lack of cell service in Elliston so be prepared for that! But you don't go there for the cell reception... 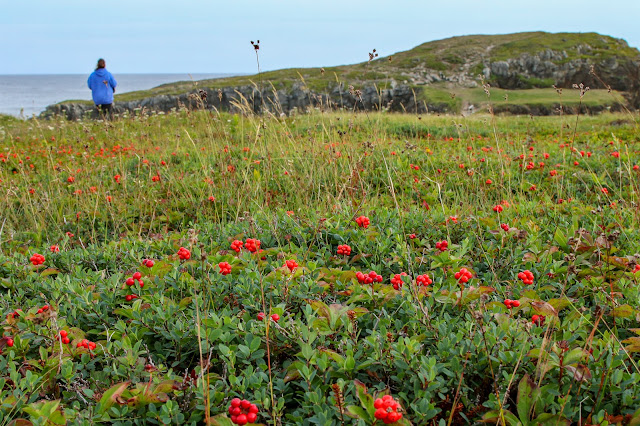 You go there to take the short walk to the Puffin viewing site! 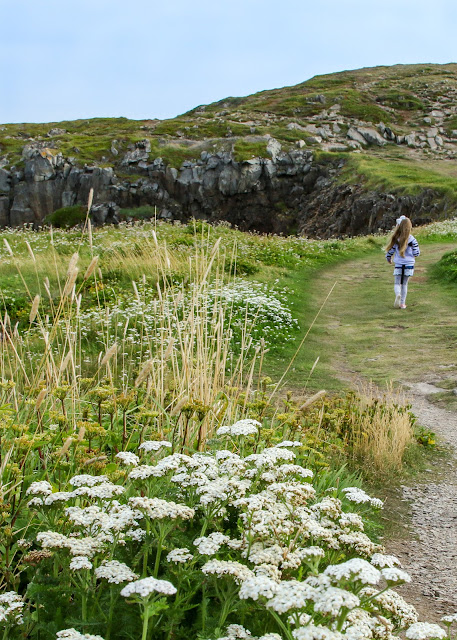 It was my second visit, and I was just as wowed as the first time. 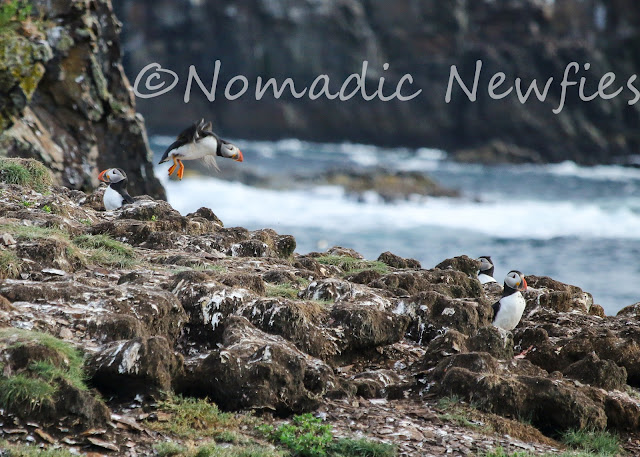 Sorry for the intrusive watermarking, but the images were quite good and quite easy to get without any extreme effort as long as you have any bit of zoom at all. Not much was needed in the way of editing either.  A photographer's dream! 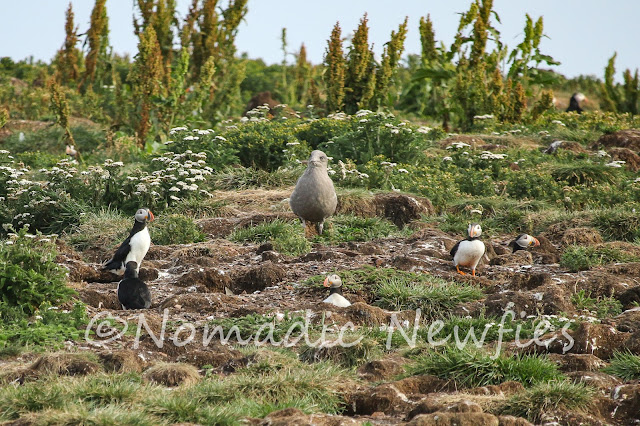 I shot these using my 55-250mm lens.  I've rented bigger lenses with supposedly better optical quality but always find the images using this lens are just as good for half the weight and half the money.  Now of course if I was looking to enlarge and sell these maybe I would have a different opinion, but then again maybe not.  I made an 8x10 enlargement of the shot below and it's hanging on the wall in our home. 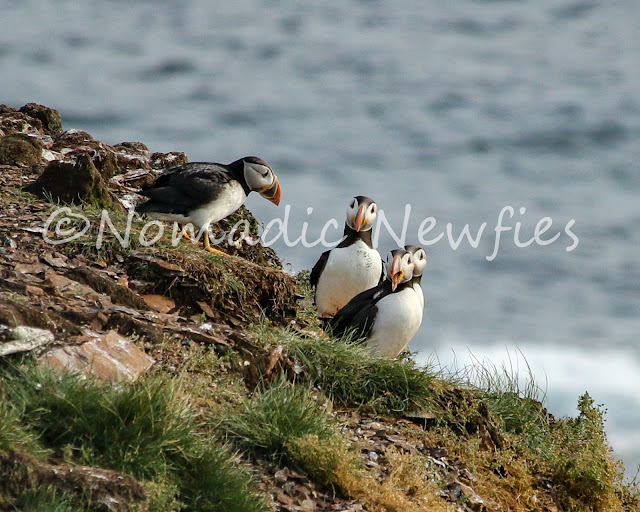 I love watching them line up at the edge and then suddenly one will take off to go fishing.  Everything here was shot hand held.  I just laid down on the ground and kept pressing the shutter button. 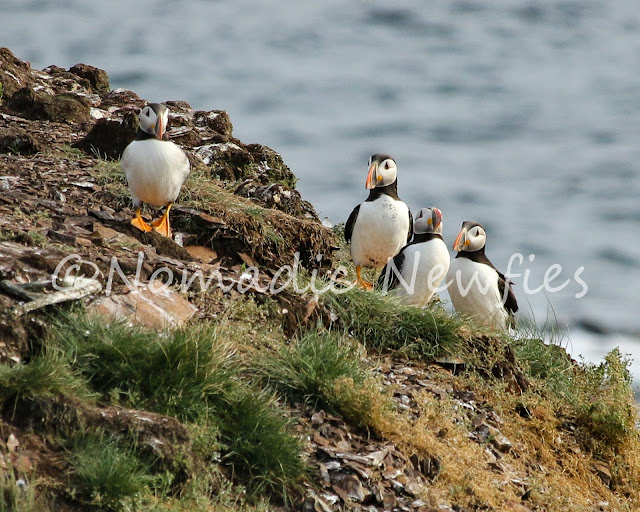 Look at these faces! I found out from my brother-in-law Jim that their other brother Gerard was the one who helped get the Puffins named the Provincial bird.  Some other bird was lined up to be named and he said why don't we let the kids decide?  Of course the kids are going to pick the comical looking little Puffin! 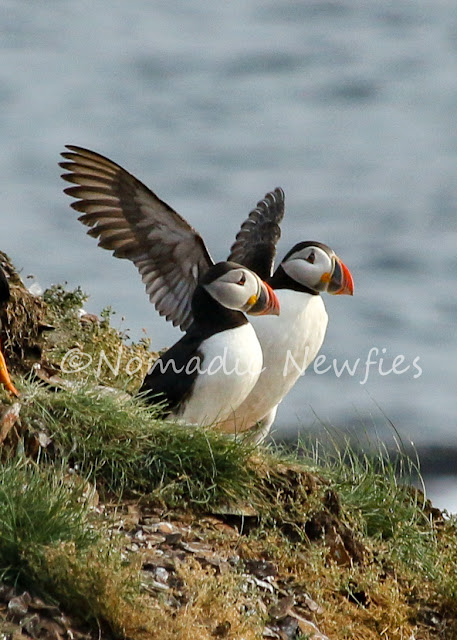 You can see a few Puffins in Bonavista out by the lighthouse as well, but I don't know why you would bother when there are so many in Elliston unless you didn't have time to make the detour. 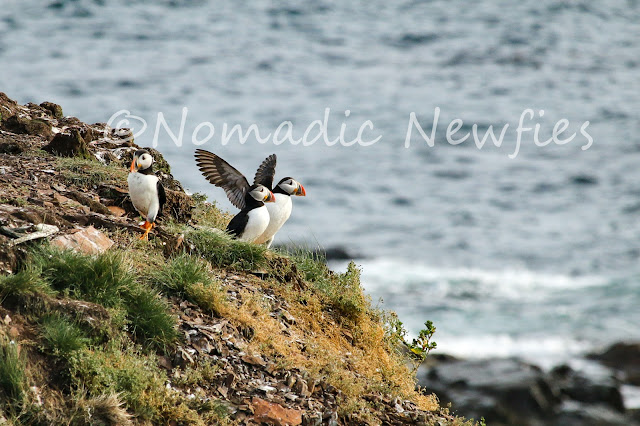 I never knew that Puffin often carry up to 10 fish in their beaks, and occasionally even many more! 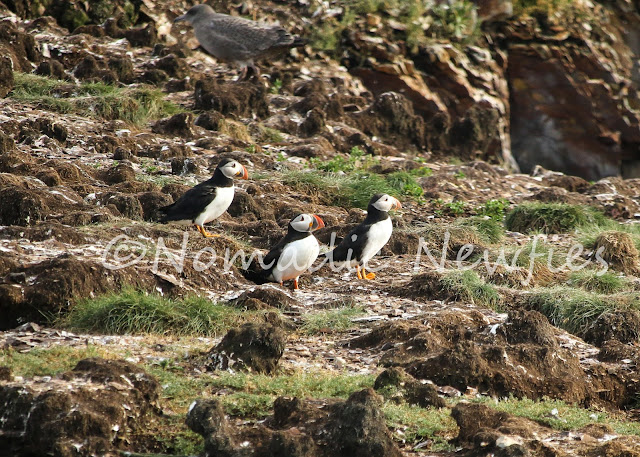 Mating happens out at sea and then they fly to land to nest.  Those burrows they have dug for nesting are about 3 feet long and the egg is laid at the end. For the first week, the puffling can't maintain it's own body temperature so one parent keeps it warm under a wing while the other goes in search of food. 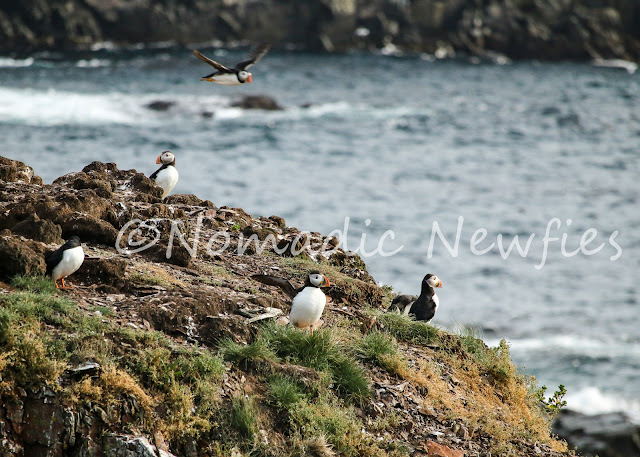 Unlike other animals you probably won't get to see a puffling while it is small.  They stay in the nest until they are 75% of their adult body weight and when they first start coming out they do so at night to evade predators. 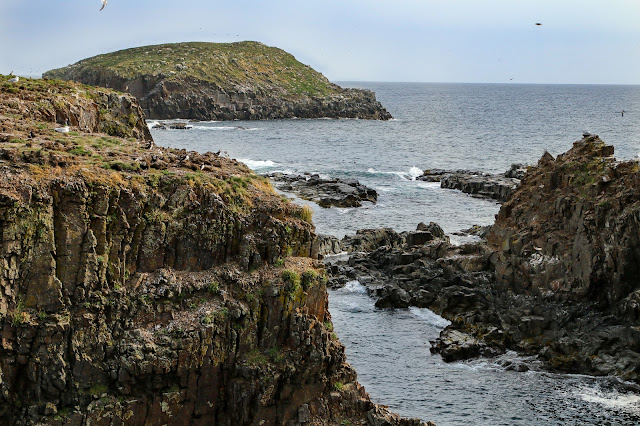 No matter when you go to visit make sure you bring a jacket, it can get windy and chilly on the point even on the nicest of summer days.  It would be terrible not to be able to stay and watch them because it was too cold for your outfit! 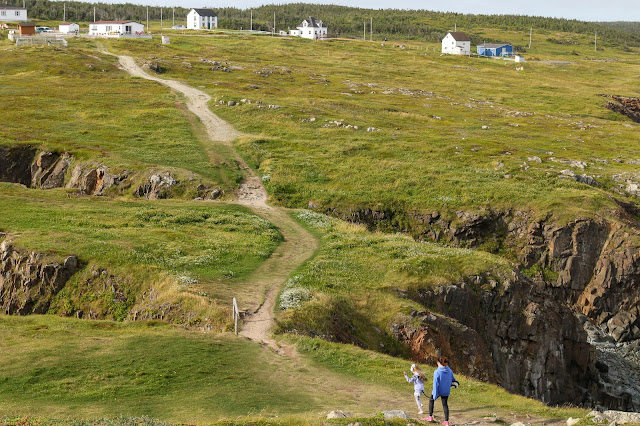 Wear appropriate shoes for the walk out and watch yourself on the edges of the cliffs.  Admission is free but donations are accepted.  Once you're done head to Bonavista like we did to see more great Newfoundland attractions!

On a side note, it's November now and I'm in the same again today...but the puffins usually leave in September so no side trip to Elliston! I'm going to try hard to catch up on the blog, I've just been too busy with all my new hobbies to tend to this one!!
Posted by Pam at 6:36 AM 2 comments: