Recently on the road my eye caught quite a few murals, not all of which I had time to stop and investigate further.  The nice thing about my new job is that I will be driving through these areas again and don't have to stop for everything immediately like you try to do when on vacation. 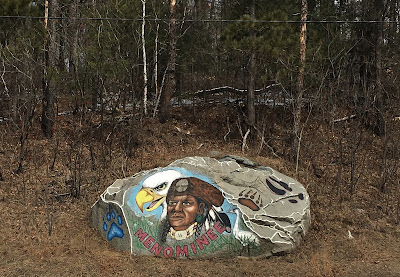 While driving through the town of Keshena I saw a few things related to the Menominee Indian Tribe.  Their rich culture, history, and residency in the area now known as the State of Wisconsin, and parts of the States of Michigan and Illinois, dates back 10,000 years. At the start of the Treaty Era in the early 1800’s, the Menominee occupied a land base estimated at 10 million acres; however, through a series of seven treaties entered into with the United States Government during the 1800’s, the Tribe witnessed its land base erode to little more than 235,000 acres today. The Tribe experienced further setbacks in the 1950’s with the U.S. Congress’ passage of the Menominee Termination Act, which removed federal recognition over the Tribe and threatened to deprive Menominee people of their cultural identity. Fortunately, the Tribe won back its federal recognition in 1973 through a long and difficult grassroots movement that culminated with the passage of the Menominee Restoration Act, Public Law 93-197, on December 22, 1973. (from www.menominee-nsn.gov)


In recent years the Menominee along with Hard Rock Casino (owned by Florida's Seminole tribe) were trying to get an off-reservation entertainment complex going in Kenosha which would have provided 10,000 jobs to the area.  Kenosha suffered over the last decades in employment rates with the closing of the Chrysler plant and other employers.  Governor Walker rejected the plan in 2015 just before he entered the presidential primaries.  There were a lot of factors leading to the decision, so I will remain neutral on the subject since it is an area I do not claim to understand.  Those jobs would have been nice though, and the Menominee  Nation could have used the monies as well since they suffer from many social ills currently that they do not have the funds to address. 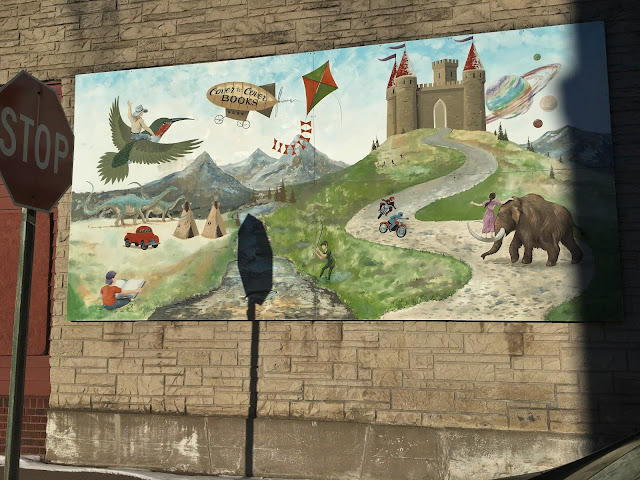 Up in Northwoods I noticed a few murals in the town of Tomahawk, including this charming piece of imagination on the side of Cover to Cover Books. 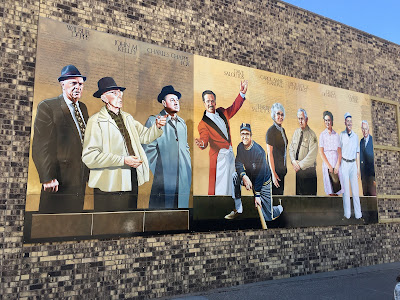 The town of Baraboo has some new murals, including one featuring citizens of Baraboo both famous and ordinary. 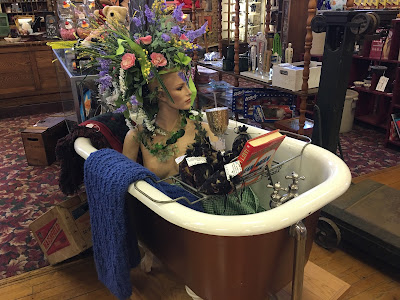 While in an antique store in Baraboo I admired artistic ingenuity of another type. 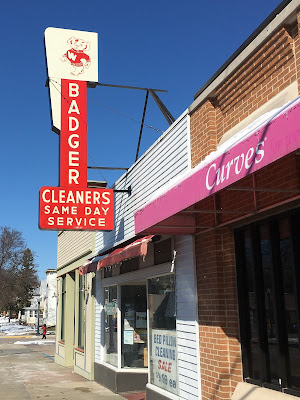 There are a few noteworthy signs in Baraboo as well, including the one above that I admire every time I pass through.  And I saw a unique sign concept in Wisconsin Dells as well... 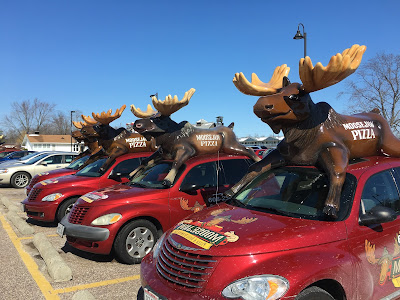 Don't be alarmed if you're in Wisconsin Dells and you see cars with moose on top of them.  I can't vouch for the pizza, but they always seem to be busy!  I'll get inside and order one of these days. 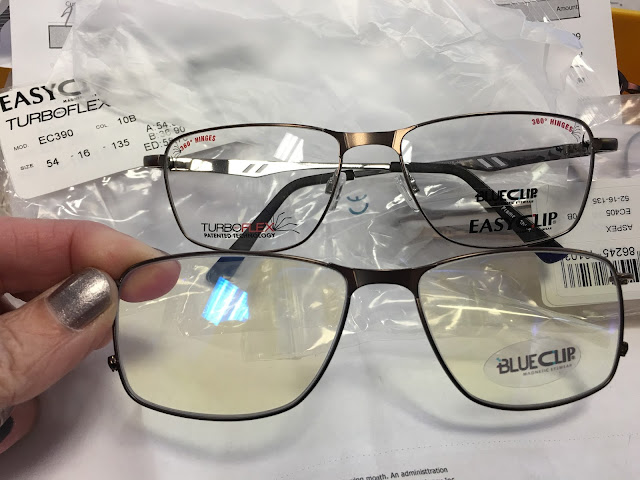 But for now I'm more interested in seeing how Aspex does with their new offering.  If you don't want a sunglass clip with your Easyclip frame you can request a BlueClip instead.  Constantly connected and exposed to the light from digital devices, today’s users need a form of protection from the harmful effects of blue-violet light which can cause headaches, sleepless nights and digital eyestrain, not to mention the long term effect of possible damage to retinal cells that could increase your risk of macular degeneration.

Whether you want a removable BlueClip or choose some other form of protection those who spend a lot of time in front of devices should seriously consider adding something to their next pair of glasses, and this is especially true for children.  Cory has a blue-blocking anti-reflective coating on both of his pairs of glasses and I have it on my computer glasses.  I opted for the sunglass clip over my anti-reflection coated lenses in my new Aspex frame - I'm sure I'll be wearing it the next time you see an outdoor photograph of me!

North to South and North Again

Been wondering where I've been these past weeks?  From Sturgeon Bay I had sales calls to make in Manitowoc and Sheboygan, old favorites of mine to visit.

And since the weather was a bit warmer than usual my mother and I even took a five minute walk down on Point Beach in Two Rivers.


I was home for a few days and then it was on to a different part of the state - I left on a Sunday afternoon and drove 4 hours north to the Wausau area, where I drove from Medford to Marshfield to Stevens Point and quite a few stops in offices in Wausau itself.


I've shown a lot of glasses, including to a few patients who happened to be around and wanted to see what I had to offer.


My parents showed up on my last day in Wausau and my mother went with me north to Merrill where we stopped for a fantastic lunch at the Checkered Churn.  They make their own fresh buns every day that they serve their sandwiches on.  The menu is small, but tastes are large and satisfying so bring an appetite!


The weather was a bit hazardous so I saved visiting the courthouse for my return in early summer. 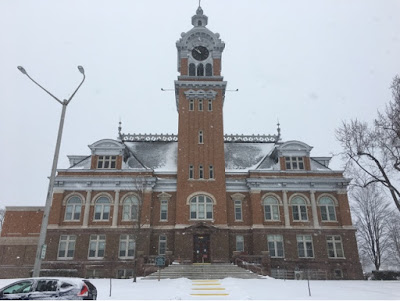 My parents stayed behind in Wausau to wait out the snowstorm, but I braved the roads and headed back south. 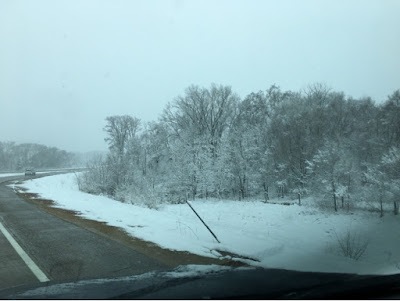 I finally found the time to pick out a new pair of frames for myself, but haven't gotten the frames from the company yet, much less the lenses unfortunately.  Back in the southern part of the state I've driven from Kenosha to Racine to Wauwatosa to Menomonee Falls.  I'll know this state like the back of my hand before the daffodils bloom.


I'm on the road for a few days overnight again, and my mother came with me again too.  We left a day early to get ahead of a snowstorm in the southern part of the state and will be spending a quiet day in Appleton just north of the nasty weather before the round of appointments begin again on Tuesday morning.


Now that I'm getting better organized and half of my accounts have been contacted I expect I'll start having some time to enjoy my travels a bit more.  I may have been missing for a few weeks but you haven't seen the last of me yet!
Posted by Pam at 10:23 PM 1 comment: