On a Mission to Photograph the Dam

Another stop I made at Mission Trails here in San Diego was to see the Old Mission Dam which is a registered historic landmark.


When the population of San Diego de Alcala Mission (I wrote about the Mission last year) grew during the late 18th century, so did its demand for water. The Spanish colonists solved the water shortage problem by building what is likely the first major colonial irrigation-engineering project on the Pacific Coast. 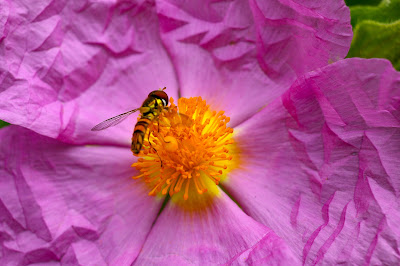 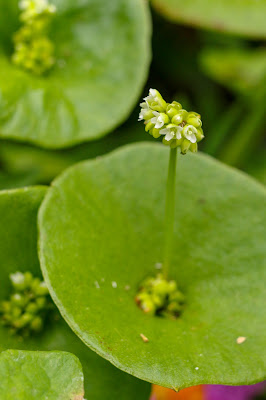 The dam collected water near the head of Mission Gorge on the San Diego River.  Although damaged by floods, earthquakes, and human activity, the dam's stonewall continues to hold water. 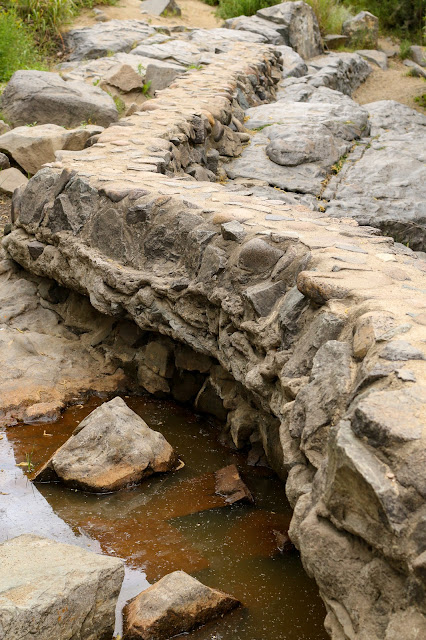 The mission’s Native American converts, who were from the Kumeyaay Nation, built the aqueduct and dam structures. The mission community started work on the dam after the drought in 1803 and completed construction of the larger irrigation system by 1817. When the laborers finished, the dam was 220 feet long, 12 feet high, and 13 feet thick.  (information courtesy NPS) 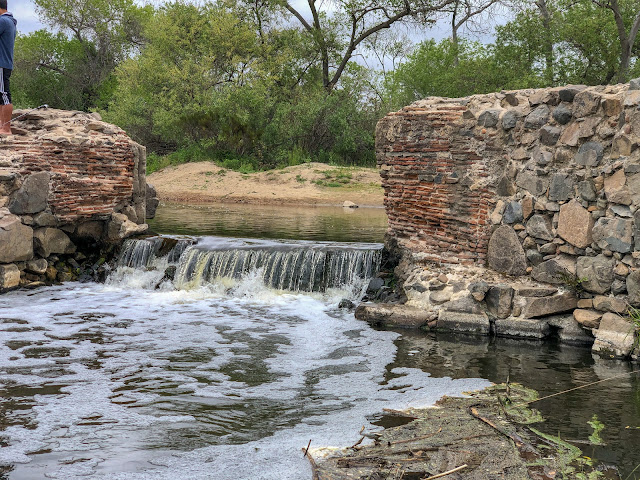 The laborers used cobblestones, bricks, and cement for the dam wall, and they laid tiles on the bed of the long aqueduct to keep water from seeping into the sandy ground. The aqueduct, which ran from the dam to the mission, was two feet wide and five miles long. 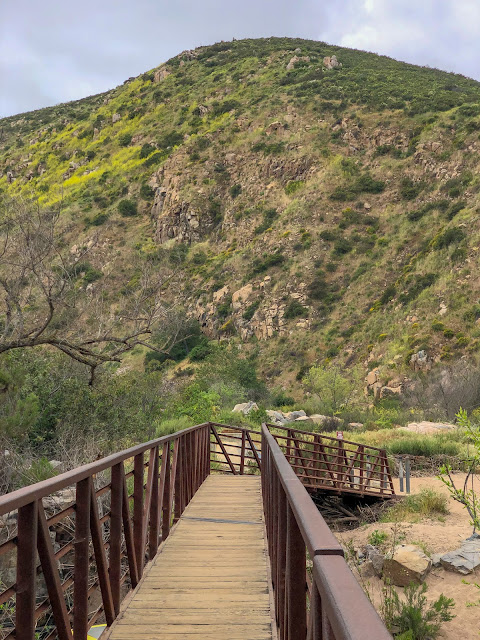 While checking out the dam I noticed an overlook but couldn't see a way across the San Diego River to access it.  I poked around and followed the trailhead until I found a bridge crossing. 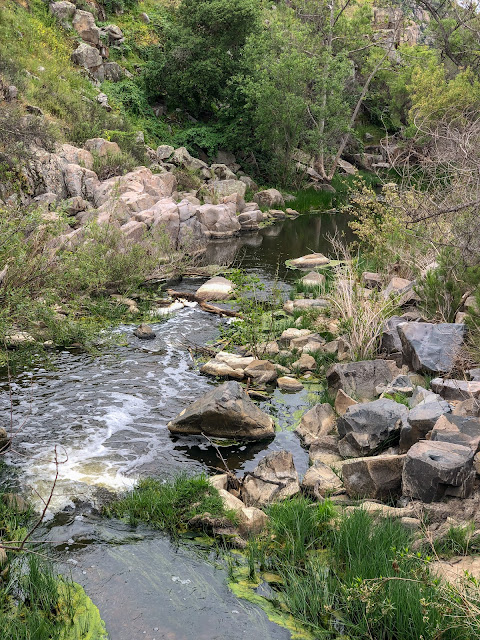 On the other side of the bridge I found myself on the Canyon Trail, which ended up intersecting with even more trails.  There is also a campground in the park, but unfortunately it is only open on weekends or you would have found me snuggled up there most likely. 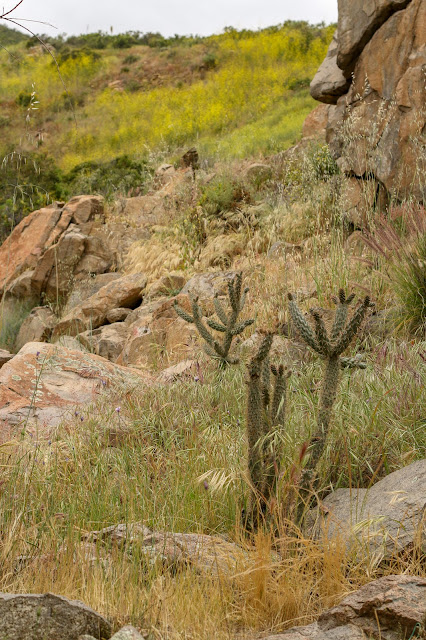 Along the way I ended up with a little hiking buddy who wanted me to hold his hand and loved it when I showed him that he could throw rocks in the creek. 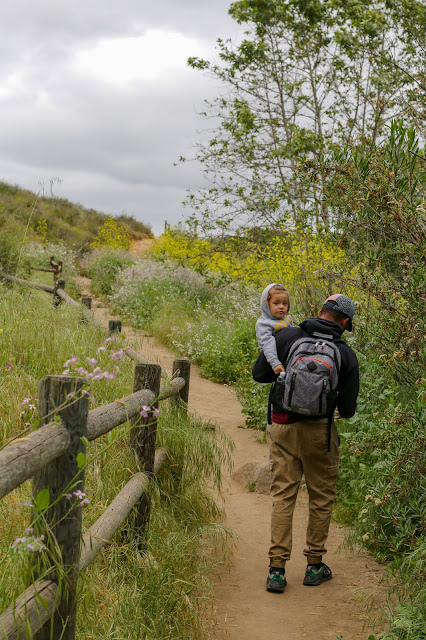 The hill for the overlook was easy to spot and up I went, where I found another little one having her lunch on the bench with her mother. 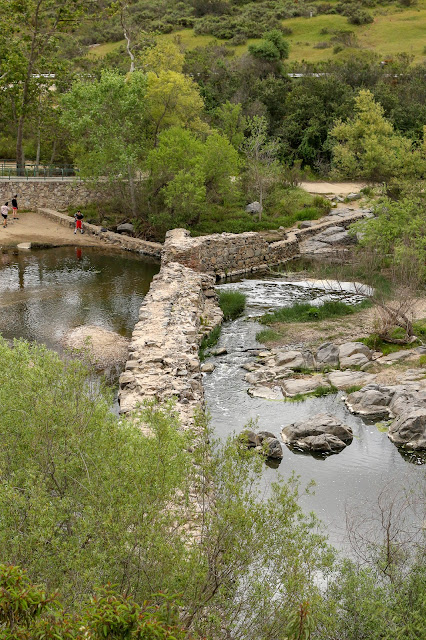 On the way back I cut through the trees and walked out onto that side of the dam, then took off my shoes and crossed the river in a shallow spot.  It's always more fun if you get a little dirty, right? 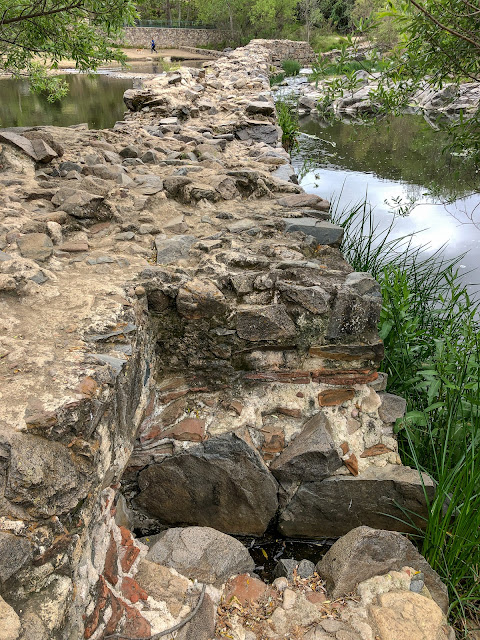 Next time I visit San Diego I'd love to stay the weekend there and walk the rest of those trails, who knows what friends I might make with a little more time to spare? 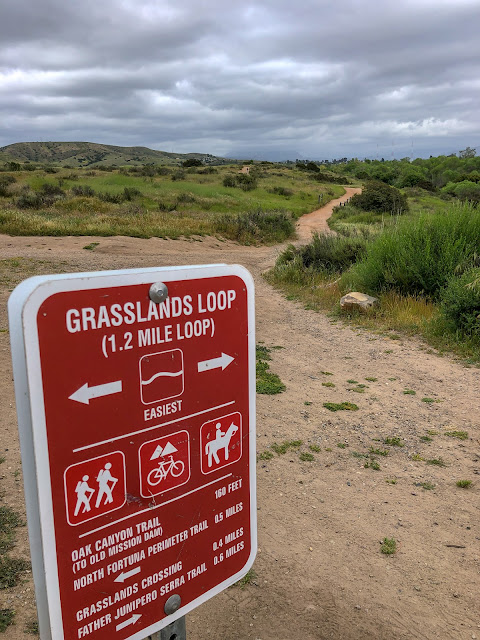 Surprise, I'm in San Diego! To celebrate my retirement (most likely temporary) I got on a plane to visit my cousin in San Diego.  It was so relaxing when I visited last year that I decided what better way to count the days before our big move than to spend a few of them here.


My cousin was in Hawaii with his family having some relaxation time of his own so after I picked up my rental car I headed out to Mission Trails Regional Park. This body of mine has put on weight sitting in the car all day driving around the state of Wisconsin in the snow for work.  Time to get back in shape! 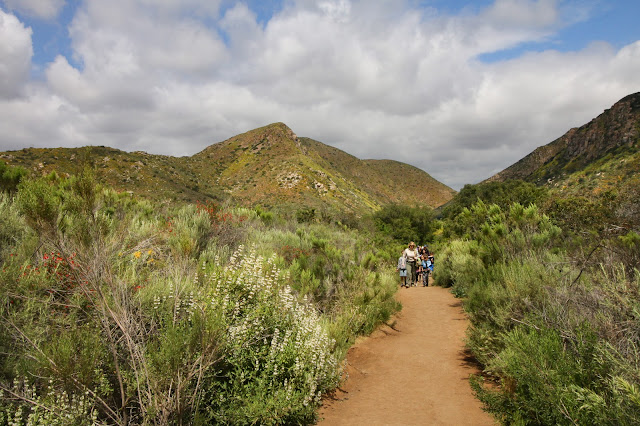 It is Spring Break here in San Diego, but I still ran into a group of kids on a field trip of some sort.  What a beautiful place to learn about the plants and wildlife of the place they call home.  It is very green here right now due to recent heavy rainfall amounts.


The Visitor Center is a great place to start your learning, with lots of windows to entice you outside into the chaparral and sage scrub habitat.


Just because it is a dry climate, doesn't mean there aren't spring wildflowers to enjoy.


And though my afternoon walk was mostly clouded over, I noted there were plenty of shaded oases to rest on a sunnier day. 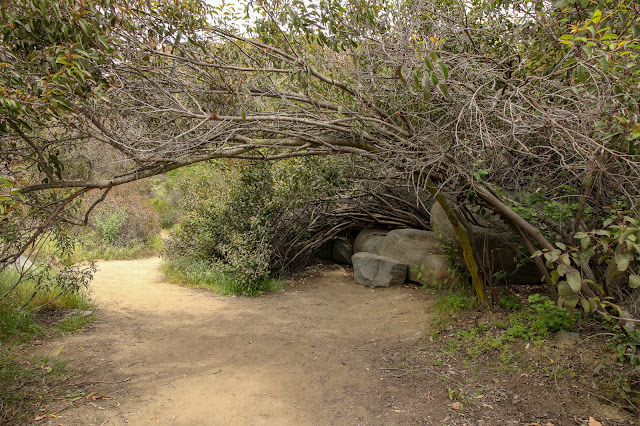 I wasn't ready to climb mountains yet, in fact I stumbled and twisted my ankle after 15 minutes for absolutely no reason at all.  But I walked it off and kept on going, saving loftier ambitions for another day. 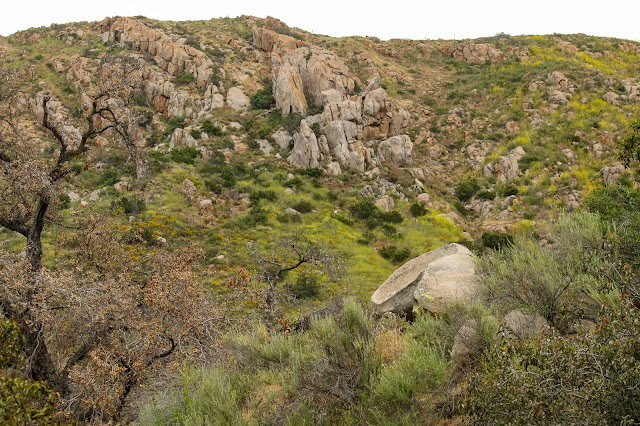 No shortage of lizards to be seen dashing into the bushes as I approached.  I'm no herpetologist, but most likely a sagebrush lizard or a western fence lizard is what I photographed below.  Apparently the underside is a big help in identification so next time I'm out looking at lizards I'll have to see if I can at least get a partial view. 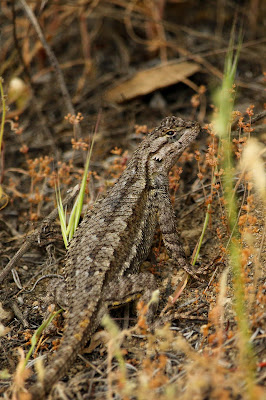 All of the plants here are foreign to a Northerner, I'm sure those children on their field trip learned more than I did. 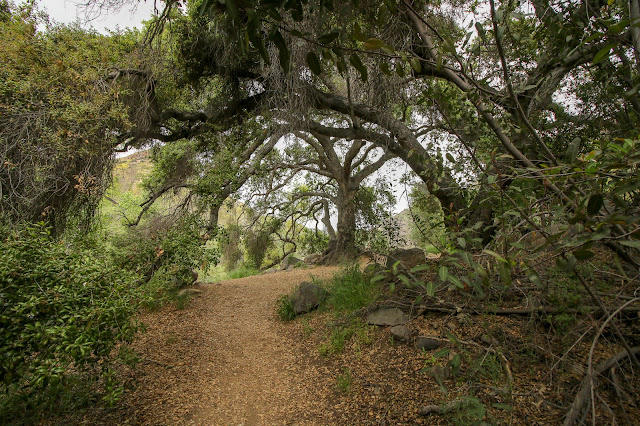 Around every turn - something new!

It didn't take long to shed my stress and my winter blues! 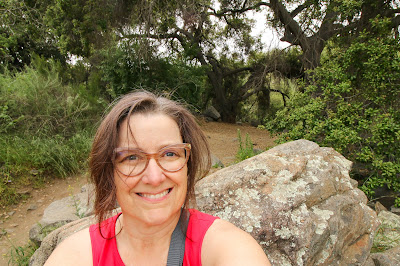 And what a joy to see more children fly past me, enjoying it as much as I was. 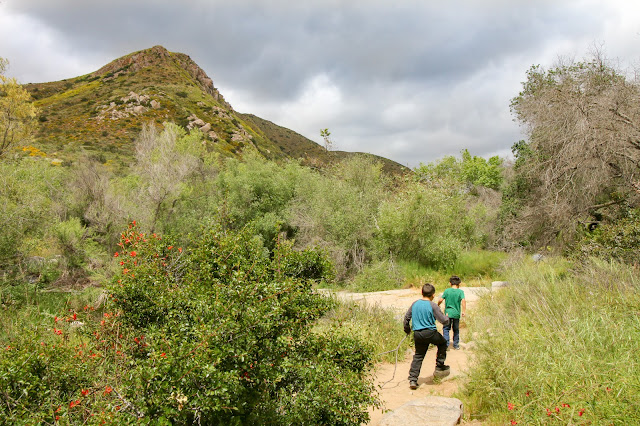 How fortunate (Que Afortunado!) to arrive in time to catch some California Poppies still blooming... 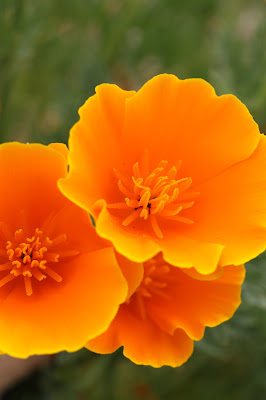 ...and hopefully I'll see many more blooms as the days go on!

A Smidge of Smokies

Look, it's been so long since I have made regular posts on my blog that when I opened it up yesterday I couldn't remember how to do it!


But, as of April 16th I am DONE WORKING! And Wayne was done working last week!  We still have a lot going on in the next few weeks, but I finally have time to post photos I took down in the Smokies 2 months ago. 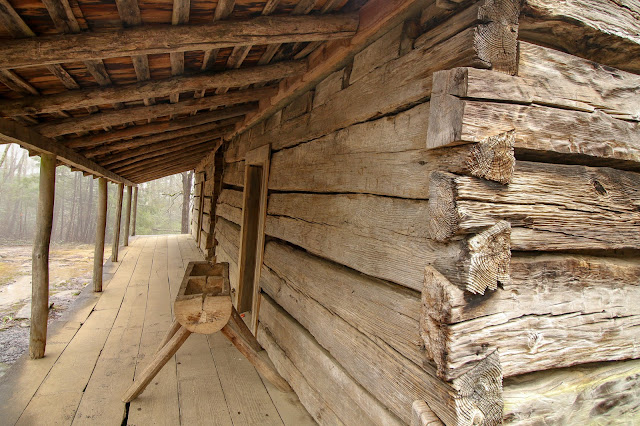 Knowing that trips to the Smokies might become a thing of the past I wanted one last short trip to say good-bye.  It ended up being almost all driving, and most of that in the rain...but I was glad I went. 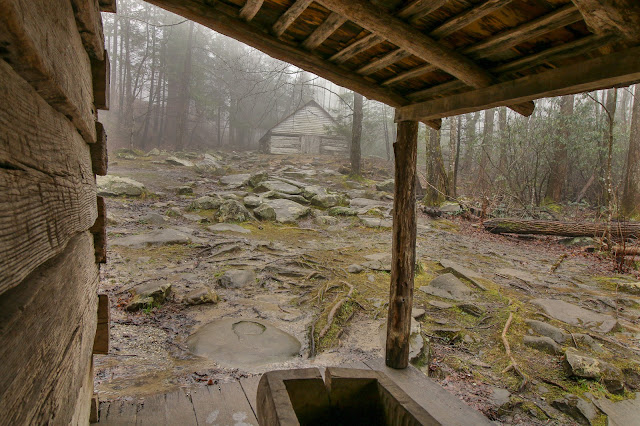 I stopped for a look around Bud Ogle's Place, liking the moodiness of the misty rain.

And any Wisconsin resident would stop in awe to see Daffodils blooming in February.  Ours just opened up a week ago, and then spent a day snowbound when the weather gods dropped half a foot of snow just for the heck of it.  Never mind I'd been wearing shorts for a few days.


The weather will be less finicky than that in Newfoundland.  I get asked about the weather there a lot, especially what the winters are like.  I'll soon know for sure, but what I tell people is that winter is a little longer with temperatures still only in the 40's and 50's by mid-April, but it doesn't drop down as low at night and you don't get the deep cold that the Midwest has to live with.  Winter temperatures tend to hover right around the freezing mark which is November or late February weather in Wisconsin.  So, no more deep cold and less snow! I won't get a break in the wind department, but you can't have everything.


Summers are mostly in the 60's and 70's especially once you get into July, August and September.  Now that's my sweet spot for weather! Might be staying put every summer!  But as I have done in years past I plan on traveling in January and March to break up the winter blues.


Another trail I hiked was Chestnut Branch which is located in the Deep Creek section of the park just over the North Carolina border.  I like this part of the park because it's less visited.  It's about 2 miles up and 2 miles back down with a little over a 1200 foot elevation gain, which was more than enough for someone who spent her winter behind the wheel of a car and getting no exercise at all. 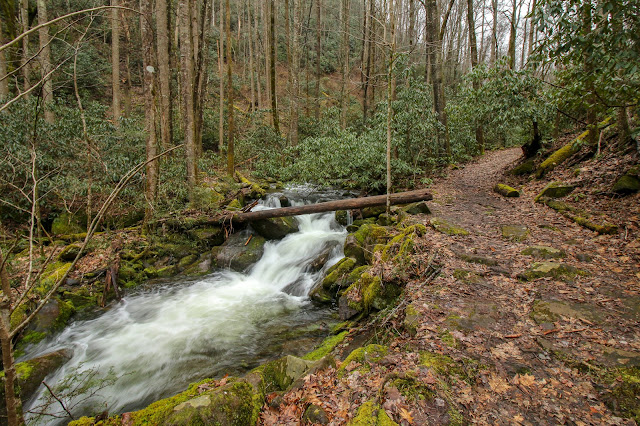 When I make those trips back I probably won't be going to the Smokies anymore, so this was my farewell in my heart.  There are a lot of places left to explore, and now I have 2 countries to call home and it's time to branch out and find new trails to love!
Posted by Pam at 9:14 AM 1 comment: