It's been so long since I posted anything on the blog that I may not even have mentioned that I was planning to go to Wisconsin for our daughter's wedding!  Even though they reduced their guest list dramatically and changed their venue, we decided that due to the pandemic it was safest if I was the only one to cross the border. 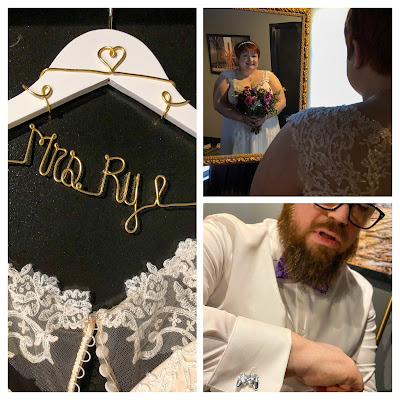 Katrina and Charlie decided to take advantage of the closures caused by the pandemic and hold their wedding at the historic Riverside Theatre in Milwaukee. 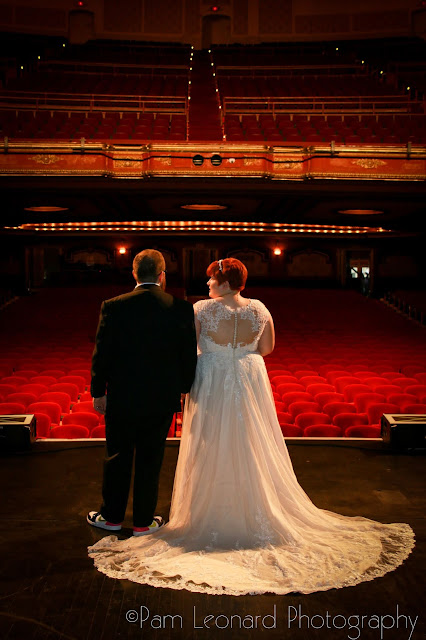 Charlie's sister was their officiant and delivered a moving ceremony filled with words of wisdom gathered from relatives who were unable to attend. 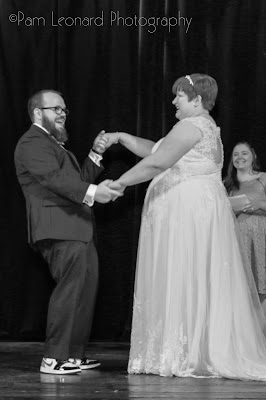 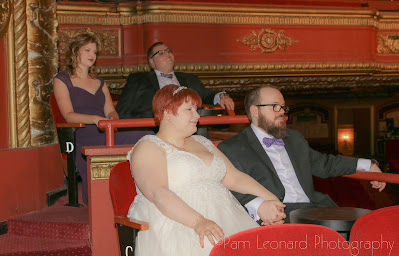 They vowed to support and strenthen each other, and affirmed that they have chosen to love each other above all else. 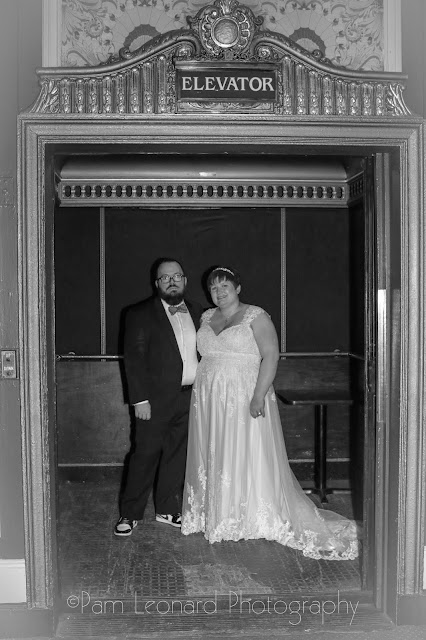 Photography in a dim theatre was challenging and I was a nervous wreck about being their photographer.  I haven't done much with my camera in over a year and even though I fumbled with the settings and my new flash attachment I was able to get some nice images that captured the day. 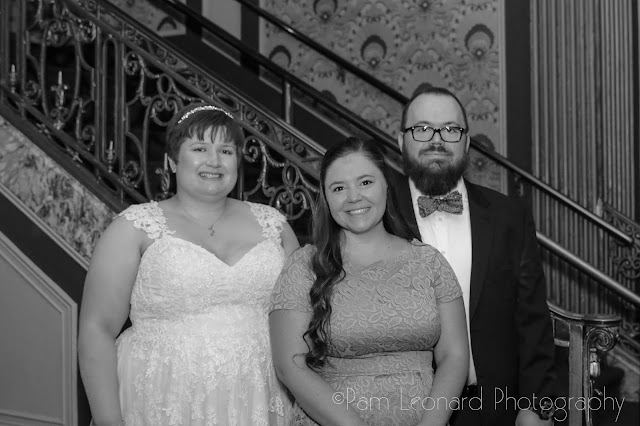 We made sure to get photos that depicted not only their love and affection for each other, but their love of Milwaukee.  Katrina was thrilled they got to pose with the Miller High Life "Girl in the Moon" in the theatre lobby. 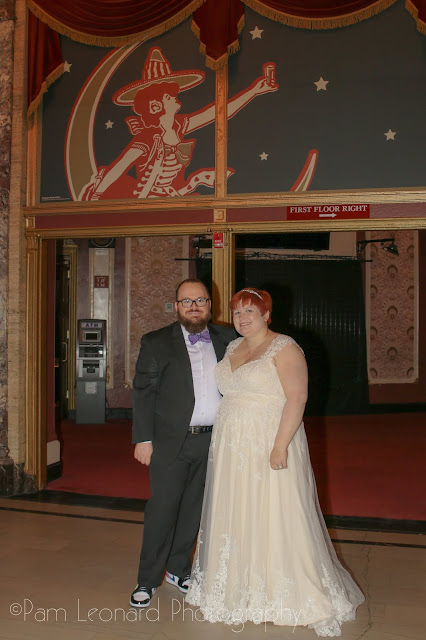 Picking photography locations on the fly, we wandered the opulent halls and everyone pitched in with ideas to make it happen. 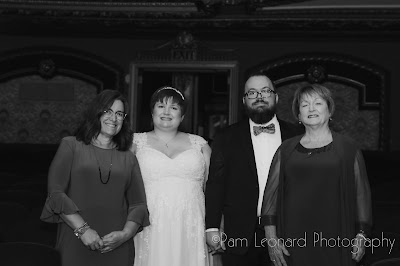 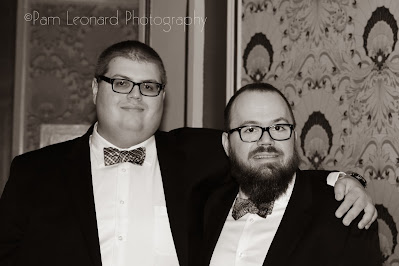 And, of course, sometimes the best photos are the ones that capture the memories of those moments when everyone is having a good time! 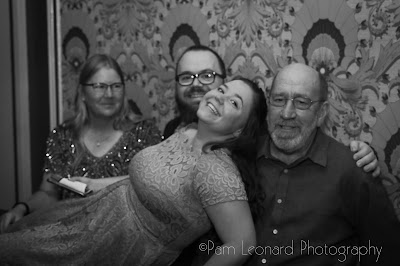 Too soon our small party of eleven people was kicked out onto Wisconsin Avenue. Perfect opportunity for the bride and groom to pose for some outdoor shots! 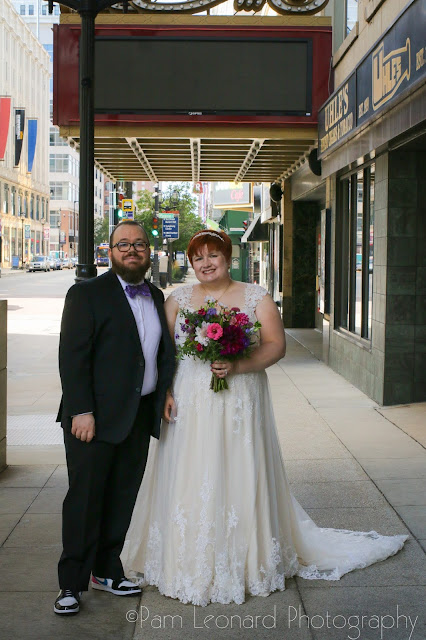 But it's not a Riverside wedding unless you mosey over and take some by the riverside, right? 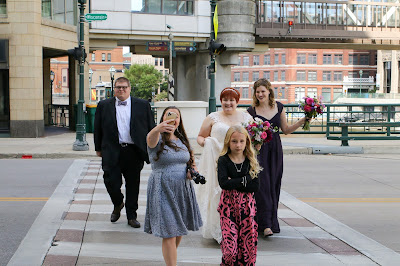 It's the small things that are important in a marriage...like putting up with each other's family members shouting out instructions to you during your wedding photo shoot. 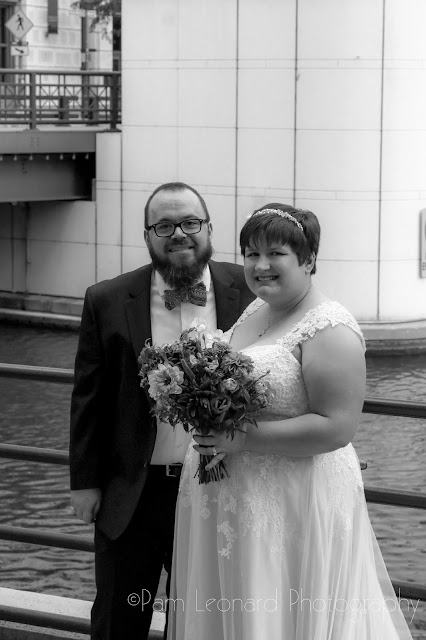 Katrina's Maid of Honor, Libby, is also a hobbyist photographer and was full of great ideas, which was lucky for me because my only idea was "let's go down by the river"! 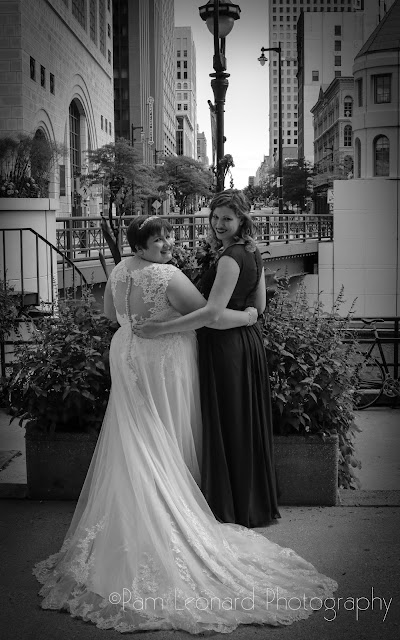 And it also gave me someone to turn the camera over to so I could join my lovely daughter. 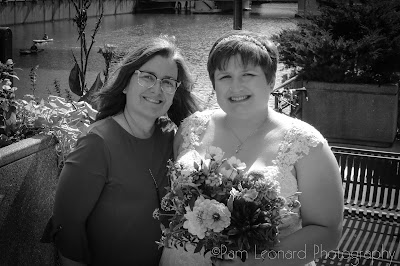 Charlie was very excited about posing under the Riverside Theatre marquee. 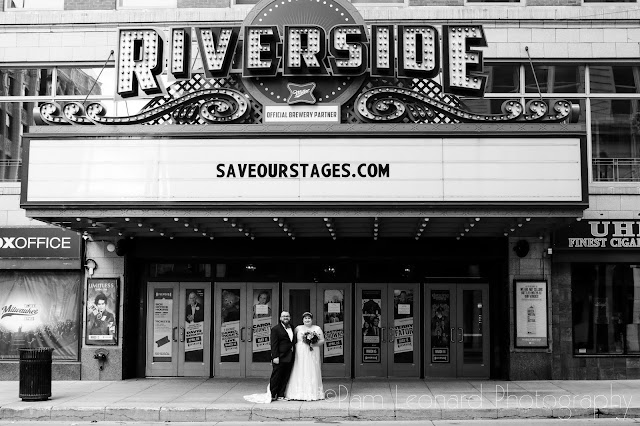 And Libby came to the rescue again with yet another great photo idea before they all piled into their van and headed to the restaurant.  Yes, they had a van down by the river! 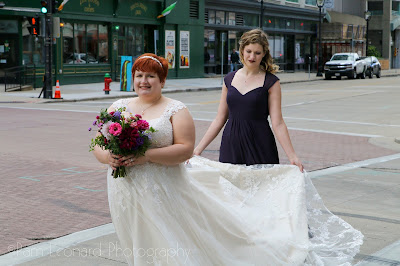 My mother and I met them at Maxie's, where the bar was open and everyone was happy to mingle in our private room with their masks off. 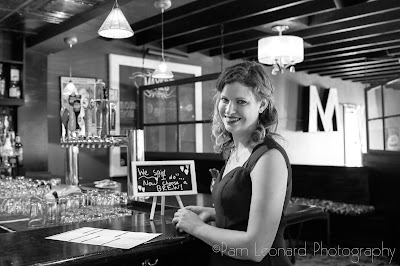 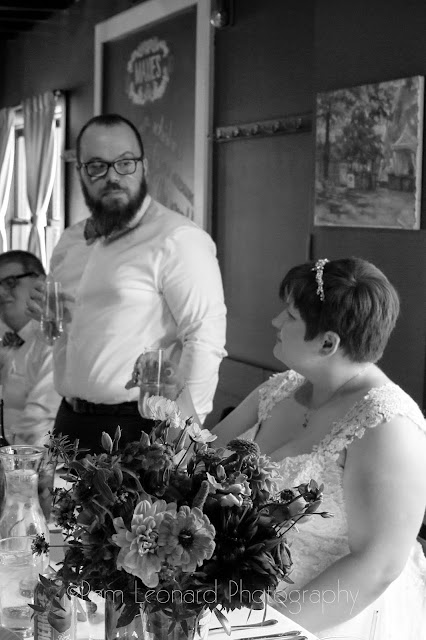 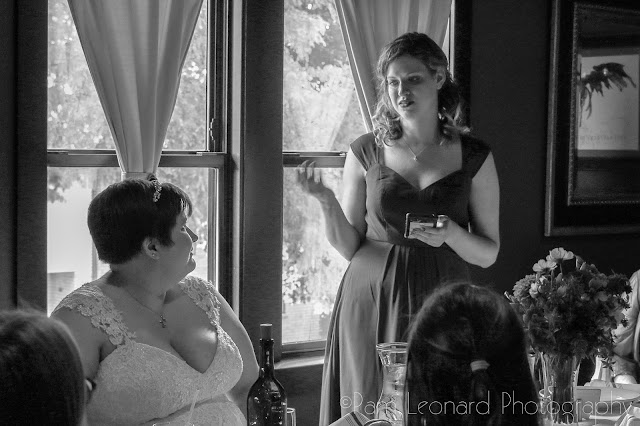 But don't worry, we had lots of fun, those tears were the joyful kind! 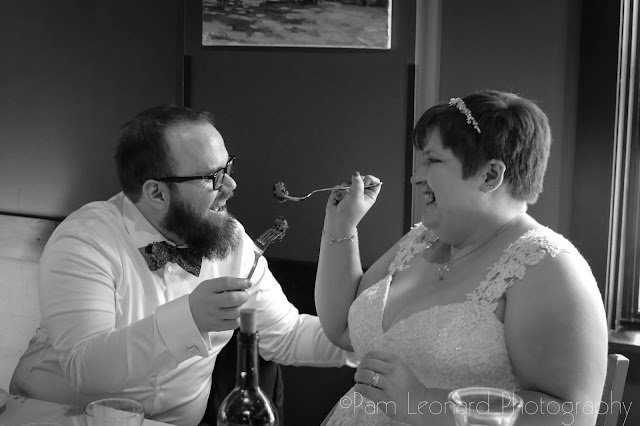 Before arriving at the newlyweds' home we stopped at a park in Waukesha to pose a little more. 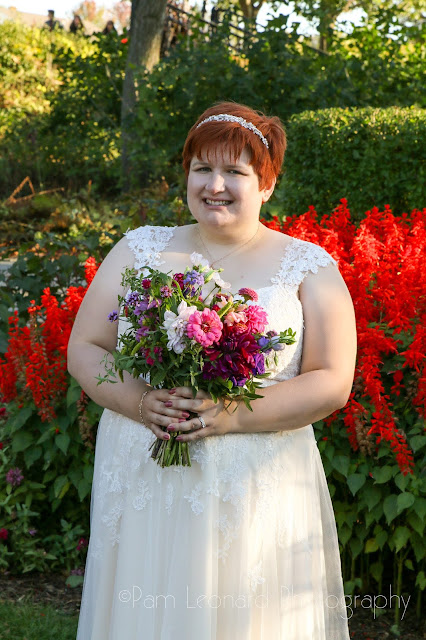 Nothing like a few drinks with lunch to get everyone in the mood to goof around in front of the camera! 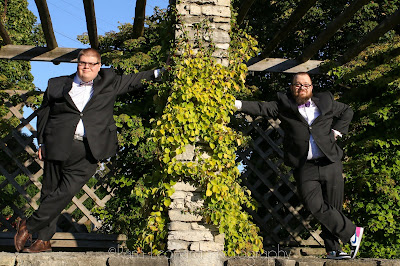 Throughout the day I had the opportunity to see Katrina and Charlie support each other, and I know their marriage will be strong because they truly understand that it's a partnership that takes work and commitment. 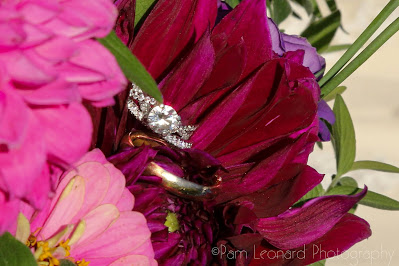 We missed those who couldn't be with us on this joyful day... 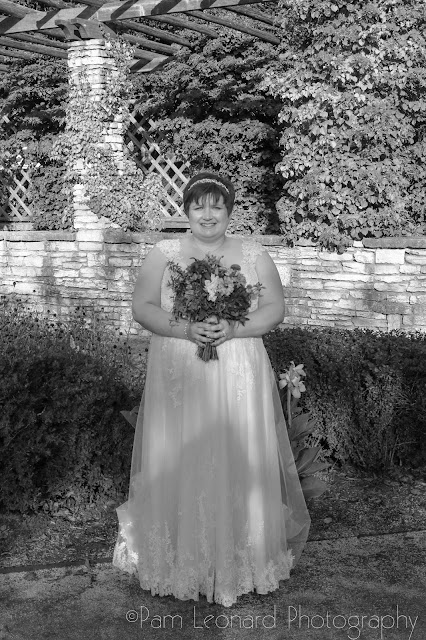 ...but the most important thing is that Charlie and Katrina are happy together and we couldn't be happier for them! 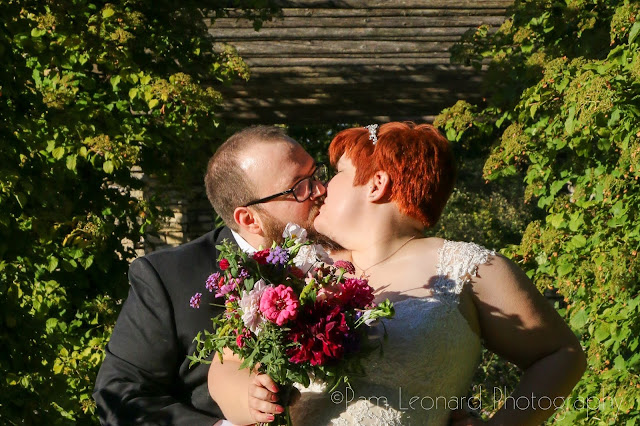 When returning from anywhere outside the Atlantic Provinces all returning Newfoundland residents must self-isolate for 14 days.  Residents and those with a special work permit are the only ones allowed across our provincial border.  Travel to the U.S. is limited to air travel only still.  I'm on day 9 and I've spent most of 4 days fiddling with the images from the wedding alone!  Five more days to fill and a girl can only paint so many rocks in a day, so I'll post again about what it was like to travel to another country during the pandemic.
Posted by Pam at 3:27 PM 2 comments: