Get Me to The Grumpy Troll! 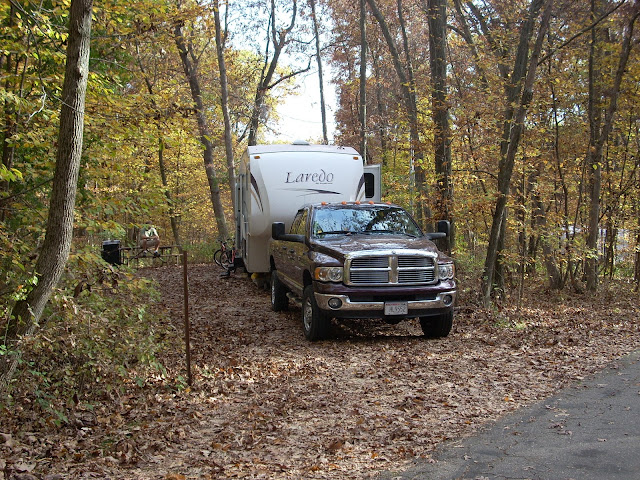 On Tuesday we decided that since the forecast called for rain over the next 3 days we'd be better off moving closer to a big city so we could find some indoor entertainment if necessary. We picked Blue Mound State Park which is outside of Madison, Wisconsin, and once we arrived were happy to see the typical large and well-spaced sites we've come to expect from our Wisconsin State Parks. The area behind all the sites is nothing but deep woods since this campground is on the smaller side. Showers were pretty good but the buildings are looking a bit decrepit and insects are a little more comfortable in there than I prefer!

Fall color is definitely past its peak here now, and over half the trees are bare, but it's still very pretty. We took a bike ride around the campground after setting up and discovered Blue Mounds has quite a few bike trails, including access to Military Ridge State Trail.

First thing Wednesday morning we headed out for the State Trail and hoped we'd be back in time to miss the forecasted thunderstorms. We paid our $4 each to use the trail and headed for the nearby town of Mt. Horeb, where we knew from past experiences we could get the best root beer ever at The Grumpy Troll. 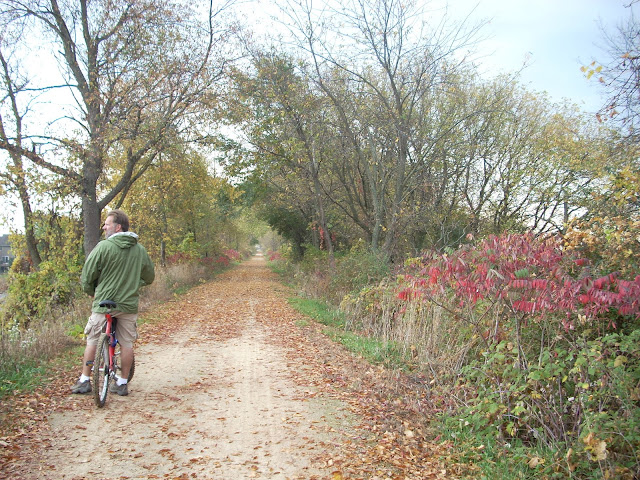 Military Ridge Trail itself is mostly level and used to be an old rail bed. When we got to Mt. Horeb we rode around a little bit and looked for trolls. For those uninitiated, Mt. Horeb is famous for its Trollway and sports a collection of trolls around town to seek out. 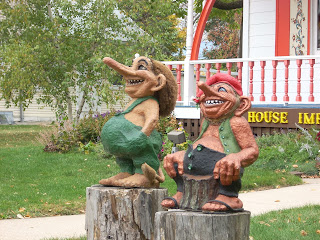 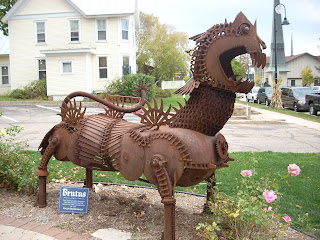 Those first guys look pretty cheerful, but that other was out in front of the visitor center with a big banner reading "Velkommen". He doesn't look too welcoming to me! 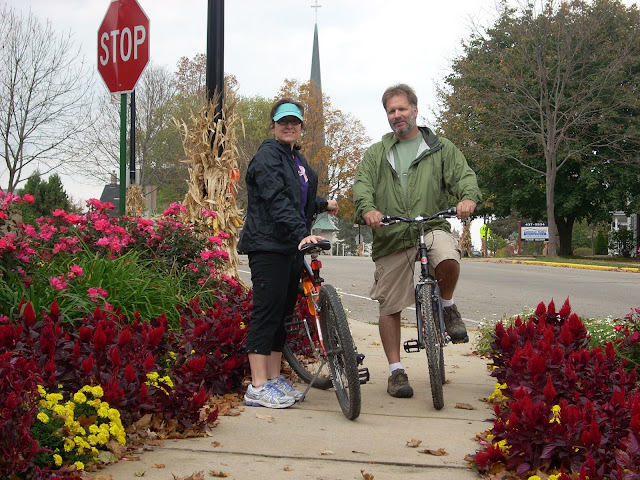 We rode around town awhile and then made our way back to The Grumpy Troll for lunch. Come for the root beer, folks, but stay for the food! They have a great menu, and even have a few vegetarian options. Wayne got the special of the day which was a beef stew with biscuits on the side, and I got black beans on a wheat pita with seasoned waffle fries. Those waffle fries were the best I've ever had! 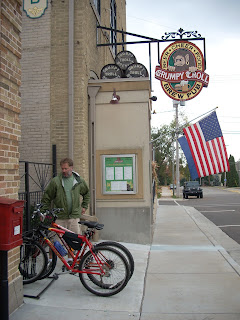 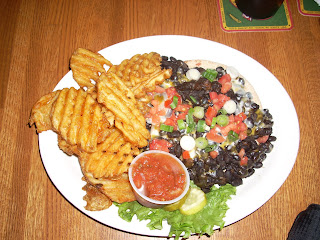 But, all good things must end, and even though we only finished half of our meals we had to move on and leave the leftovers behind because we don't have any way to carry anything. Next on our to-do list!

By the time we got back to the campground our legs were jelly! We figured we rode about 12 miles, and I was so exhausted that I fell asleep for awhile. We missed the rain while biking, but it didn't take long for it to start once we got back. Eventually we forced ourselves out of the camper again and drove into Madison to the West Towne Mall. While in REI we looked into a bike/kayak rack system but still don't know what we're going to do. I think we need to figure out a way to attach them to the camper because it doesn't look like they're going to fit onto the top of the truck. Anybody have any suggestions??  I don't know how long we'll cope with throwing everything inside! We're going over to Camping World tomorrow to see if they have any ideas.

I'm always the first one to ding or scratch anything new, and it usually doesn't take very long. Yesterday we took the kayak out on the sloughs of the Mississippi River. 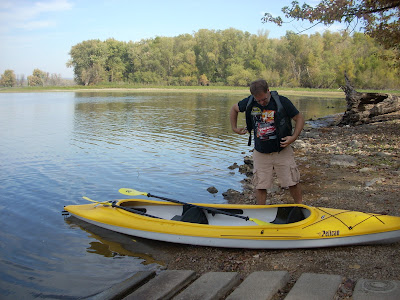 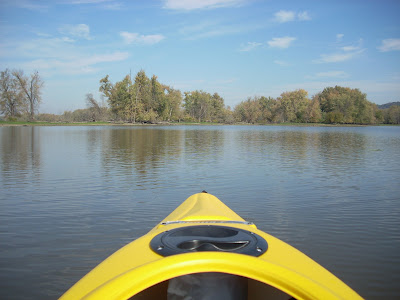 All was going well except for a little bickering about why I wasn't supposed to "help" when Wayne was steering. I was taking it personally until he told me that's just the way it is in a two person boat situation. Well, that's another story altogether! We settled into a rhythm and headed for the bald eagle in the top of the trees and had fun listening to his friend hiding in the bushes making quite a lot of noise. Just after we paddled away the two of them took wing for another part of the river. 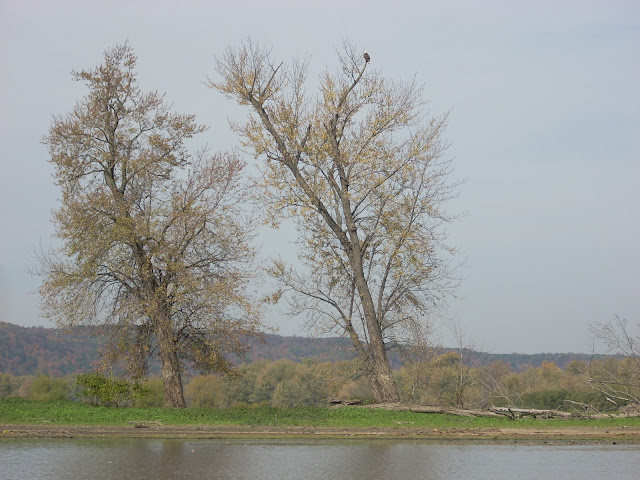 We paddled around a little more, and my lower back was twinging, so Wayne offered to tighten up the straps for the seat a little bit...and crack! The buckle holding it together snapped and now one side of my seat was sagging. Okay, technically it wasn't me this time who took the tarnish off our new toy, but still I was a little worried  this would make him quite cranky and spoil our adventure. However, he took it in stride, stuck his feet in my lower back for support and we paddled around for another hour! Gotta love it when they can still surprise you after 22 years together! 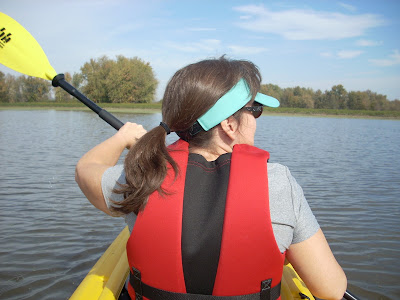 Hiking and Biking in Iowa

The more we travel, the more we realize how great our Wisconsin state parks system is. From the staffed gatehouse to the convenient dump station down to the meticulously labeled and perfectly laid out campsites. When we arrived at Pikes Peak state park in Iowa on Friday, it was nothing but confusion. We made reservations online ahead of time, but when we arrived there was a sign at the entrance saying first come first serve please self-register. So, we thought, this must be the non-reservable loop, keep driving until we find the other one. It was the only loop we soon discovered, so we came back, but there was no place to check in, and no site labeled camp host, no signs indicating whether the loop was one-way or two-way driving, no sign indicating anything! A woman noticed our confusion, came over and asked if she could help. I asked if she was the camp host and she said yes and directed us to our site after confirming we had reservations because the campground was full. We asked which road we should take in to our site and she said it didn't matter, go this way, but when we drove down the way she indicated it was the "wrong" way and we had to go back around in order to back in to our site. These are all small things, I know, but I just didn't realize how great we had it whenever we went to a Wisconsin state park! When we got to the site, I doubted we would fit, but we got in and set up. 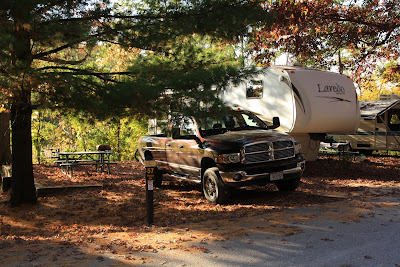 The next morning we decided we'd start our day off with a bike ride down to the town of McGregor. The Great River Road was closed for construction just outside the park entrance road down to the town, but we figured that didn't mean closed to mountain bikes, right? The dirt was quite rutted, and it was an 8% grade so I pretty much rode the brakes the whole way down while trying to dodge bad spots. The fall color up here looks a bit dull, and folks have told us they've had a very dry summer, but it was still a pretty ride and there was no one but us and some turkey vultures on our ride. 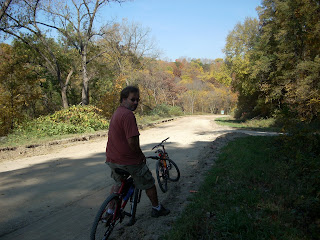 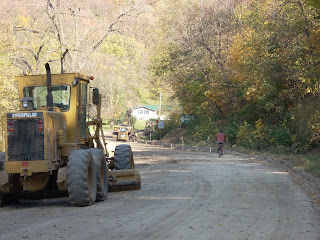 When we got into town, we discovered they were having some sort of fall festival. Traffic was heavy and we decided it was probably better to ride on the street than on the crowded sidewalk, but I was pretty nervous zipping past motorcycles and wondering whether cars parked along the side wouldn't see us and open a door or pull out. The town has quite a few charming buildings from the 1800's that are in nice shape, including a former carriage makers. Wayne stopped to chat for a minute with the lady giving buggy rides. 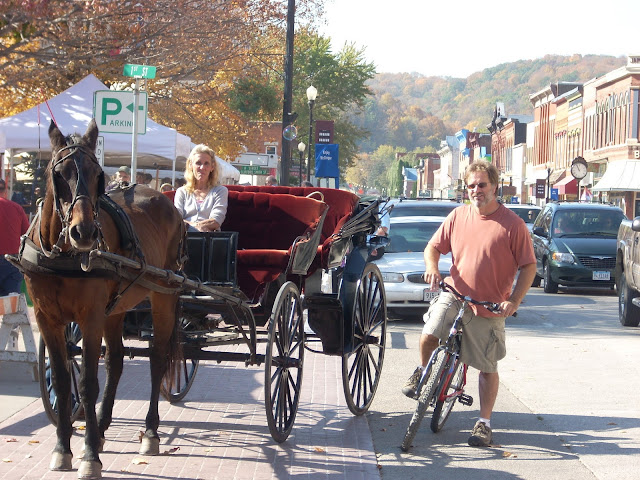 It didn't take long for us to reach the Mississippi River and we were happy to discover a paved path we could get onto instead of the busy road. We weren't on it very long before it ran out though, and we crossed the road to investigate a National Wildlife Refuge sign. I ran across the road on foot and Wayne soon followed with both bikes. The visitors center was closed and there were no paths or access to anything due to the bluffs, so we turned around and went back through town to tackle that uphill ride. We didn't make it too far before having to hop off and push the bikes, and even then we were breathing pretty hard. After making lunch we drove over to Prairie du Chien in Wisconsin to check out the Cabela's and run some errands. 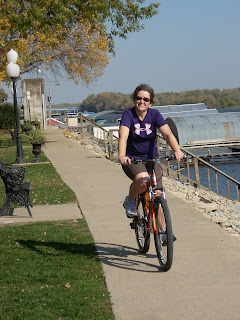 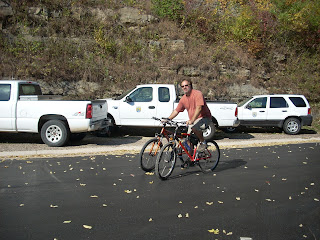 On Saturday we headed over to Effigy Mounds National Monument which was just a short drive north to the town of Marquette, Iowa. The rangers at the monument were very informative and in addition to information about the mounds we dug for details about area kayaking and good restaurants. The first section of the trail was pretty steep, and then there were a few switchbacks. 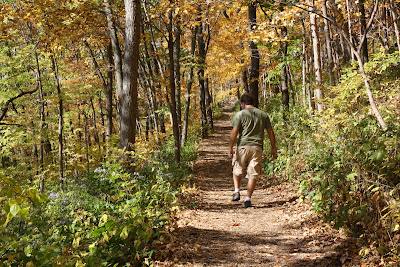 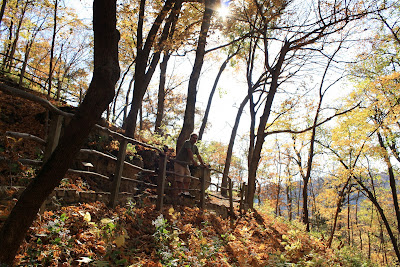 The woods were very pretty, but as those who've seen mounds before know, there really isn't much to see about the mounds themselves. The film was nice, and the museum in the visitor center was good also, and I'd recommend getting educated before heading out to any mound site. We just absorbed the peace of the woods and I thought about how different life was for the Native Americans than it is for us today. After our 3 mile round trip hike we went out to lunch at Fort Mulligan's Grill in Prairie du Chien on the Wisconsin side of the Mississippi which was one of the places the ranger recommended. The food was good but not great, but the prices were reasonable and our waitress was very sweet and helpful. 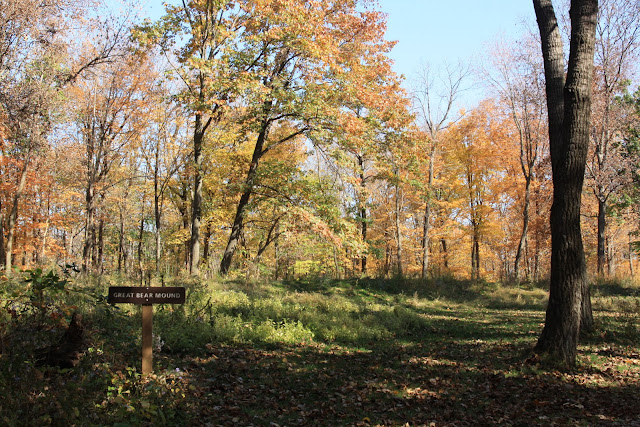 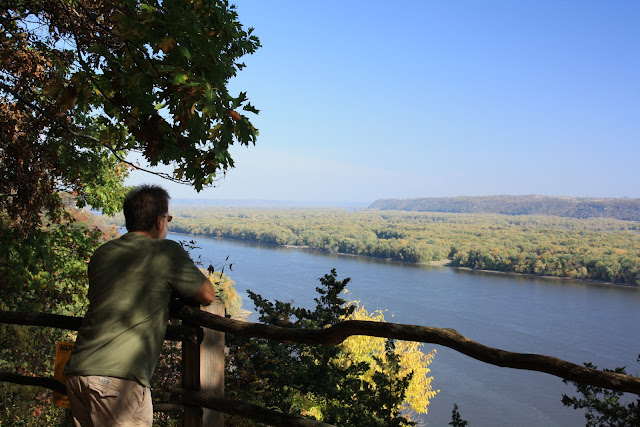