Bull Head Trail - What Happens Without a Plan

This hike was too good to wait to share, murals will have to wait for another Monday!  On Sunday morning I gave up on trying to wake up Night-Owl-Cory and decided to take a hike by myself on our first full day at Great Smoky Mountains National Park. I didn't really have a plan, but wanted to keep it close to "home" so I drove over to Cherokee Orchard Road.  I knew that the Roaring Fork Motor Nature Trail was closed in the winter but that there was access to a couple of trailheads before that point. 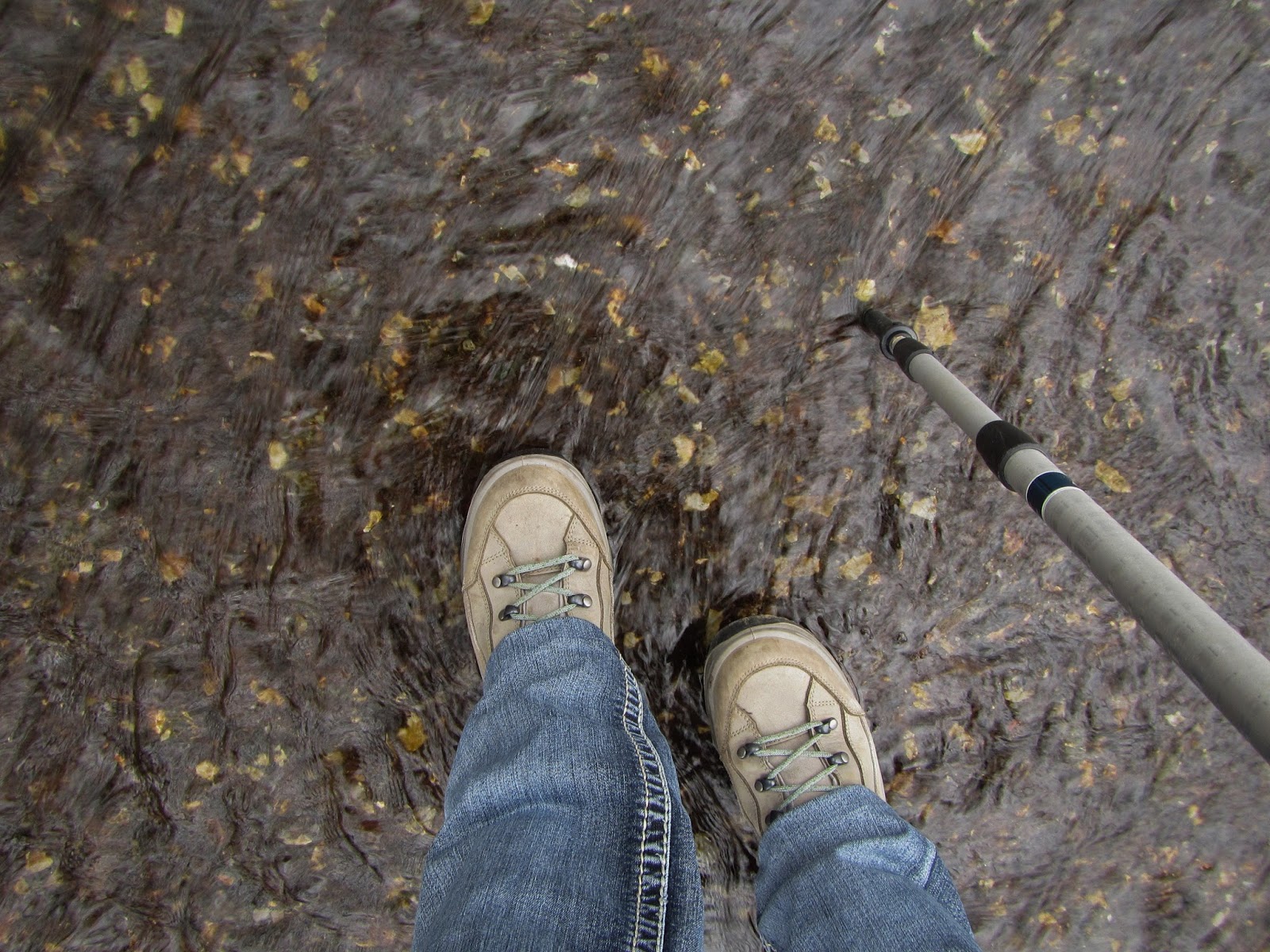 The pavement eventually gives way to gravel and once past the sound of the creek there was much to see including some fungi and signs of the old settlements that used to be in the area. 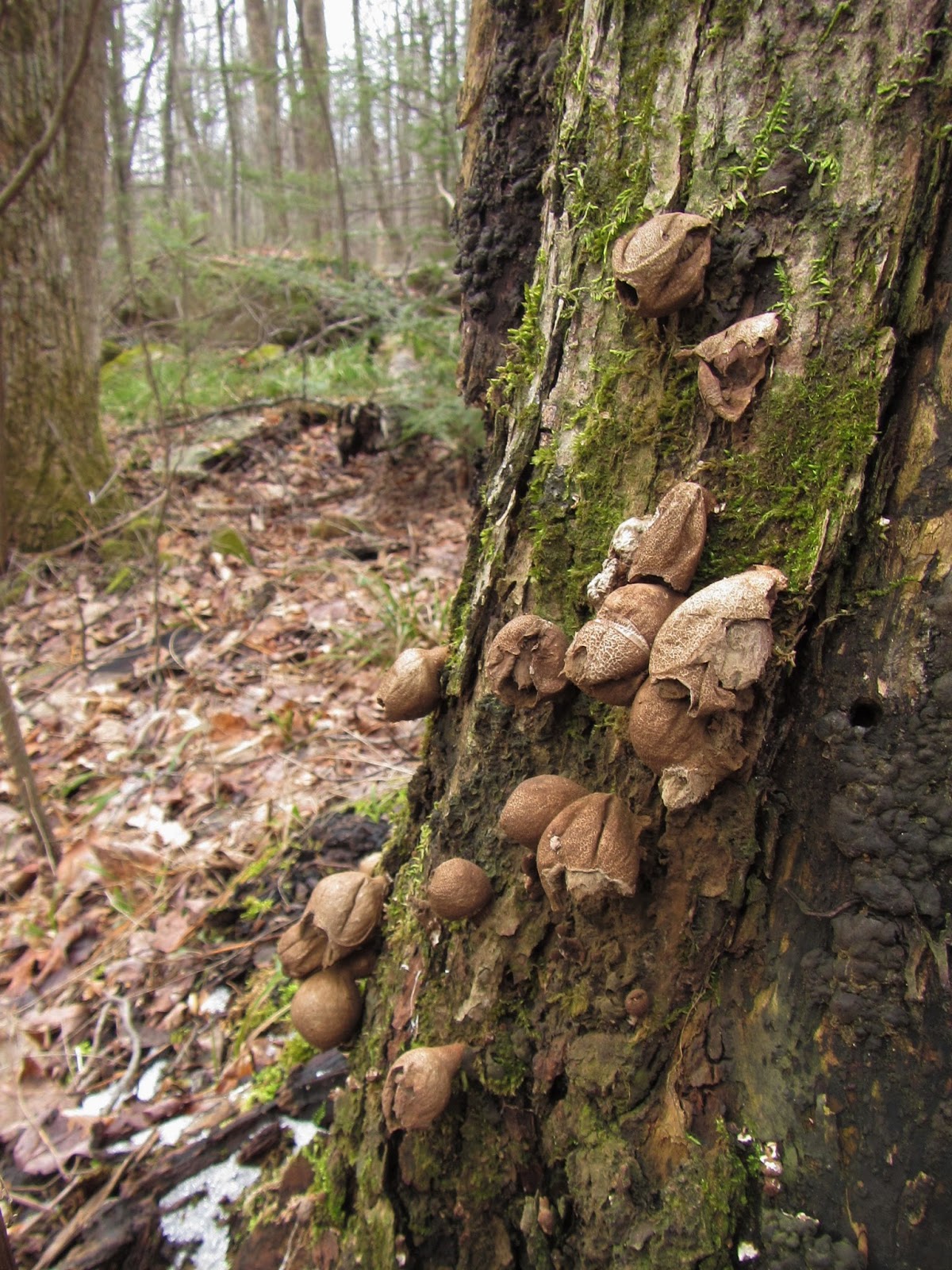 There was a pair of ladies who got on the trail right after I did and as I was contemplating taking the turn for the Bull Head Trail they caught up to me so I asked them to take a picture for me. 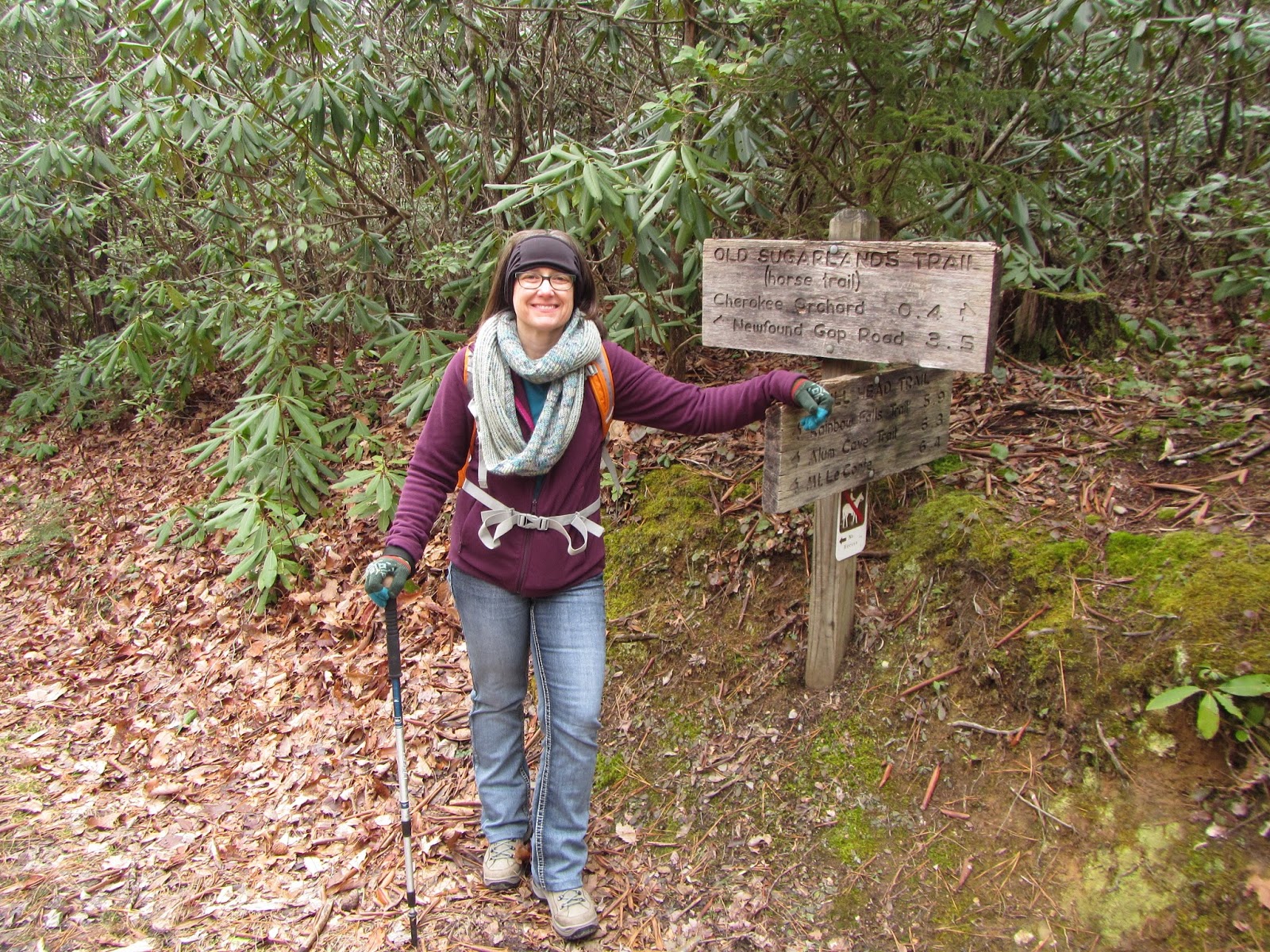 At this point I'd gone 0.4 miles and was itching for a challenge so I took a left and headed up. 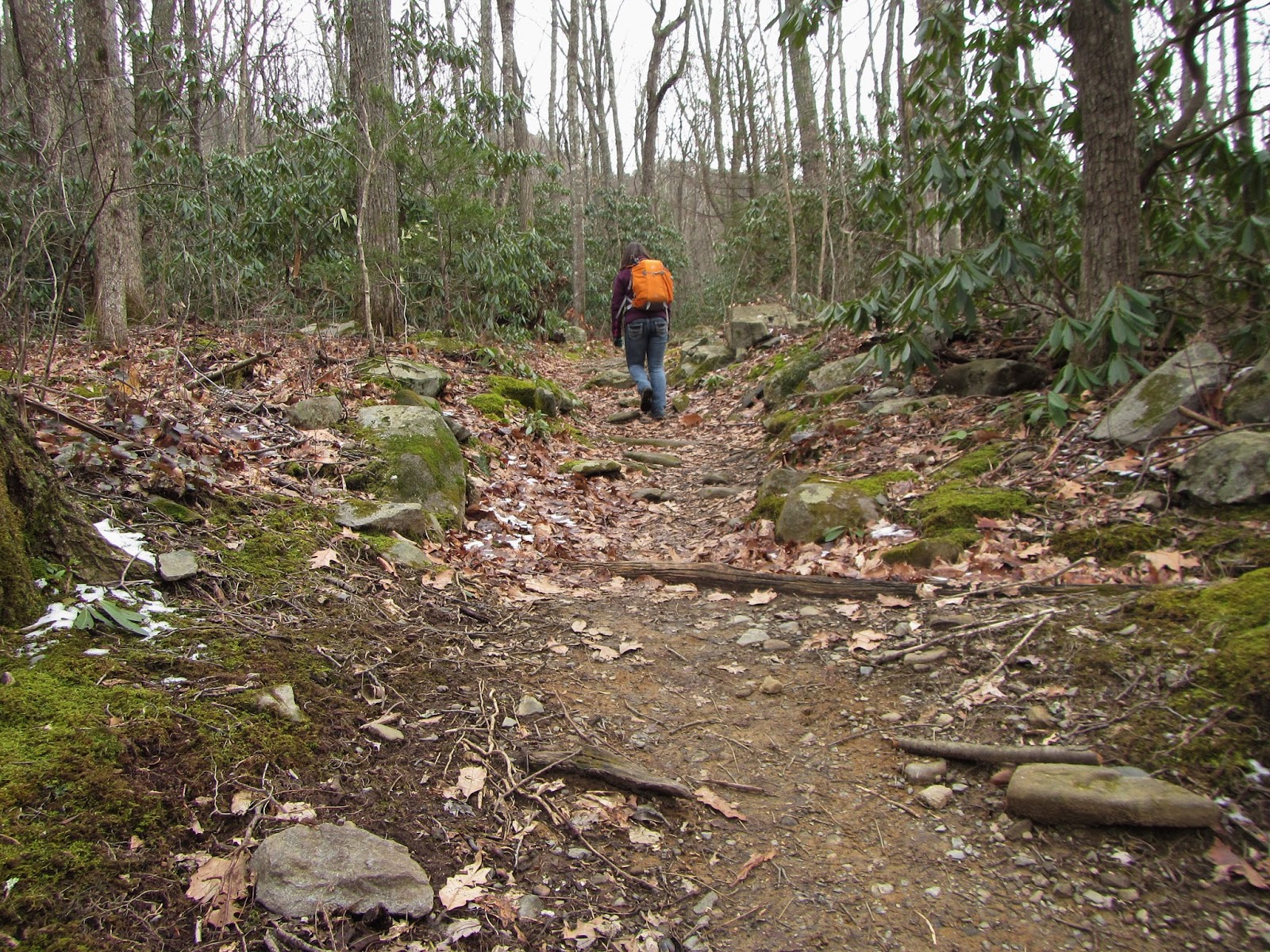 What I didn't know was that Bull Head was the name of a mountain.  Sometimes not knowing where I will end up going is a good thing or I might never go.  How did I get that shot of me on the trail?  I attached my new Canon Powershot D30 to my hiking stick!  Just plant it in the dirt, set the timer, and selfies can be yours without outstretched arms in the picture! 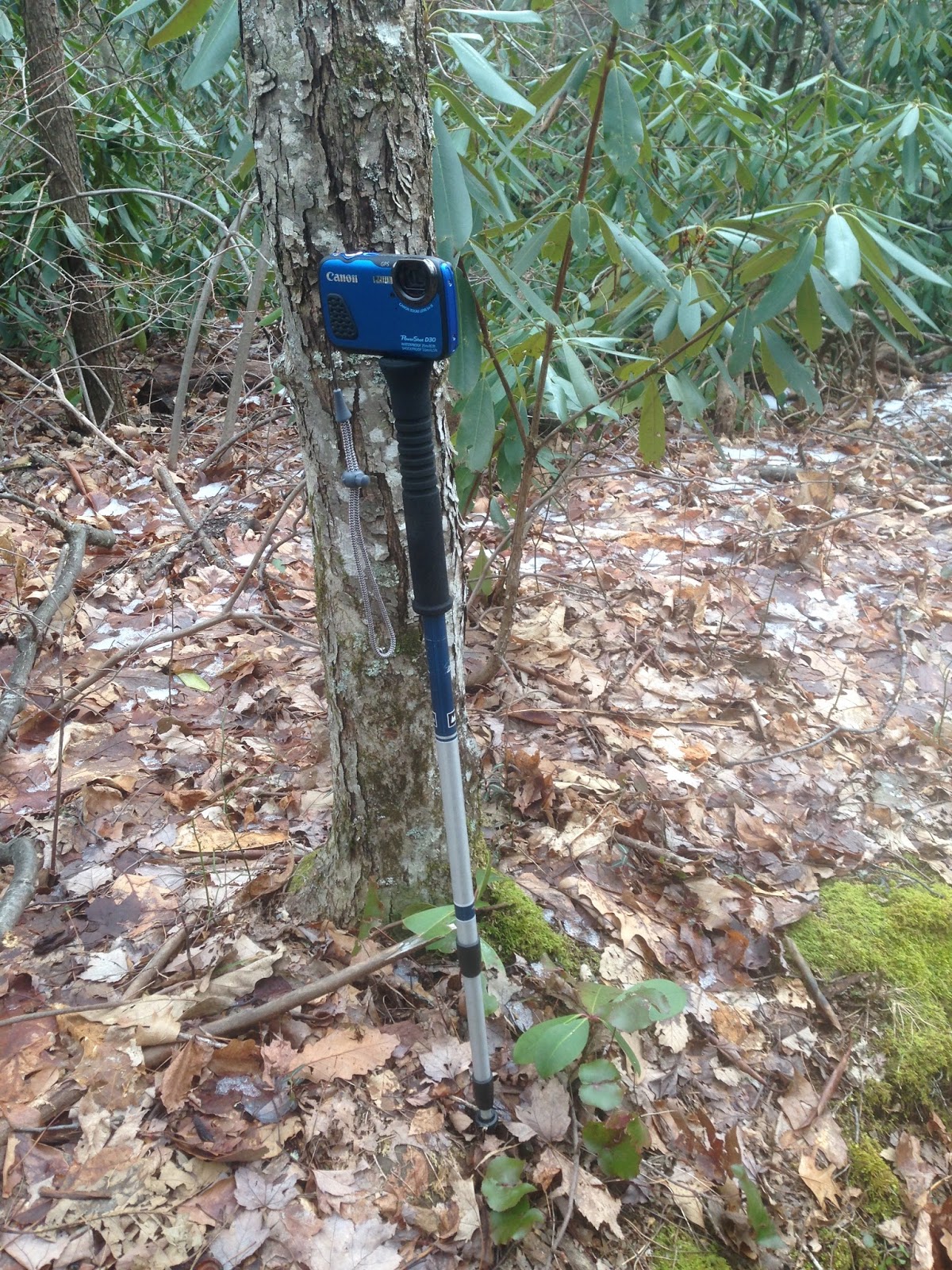 As I kept ascending I was glad that I'd opted for the light camera and all pictures in this post were taken with it or with my iPhone, including the one below.  Owl pellet? 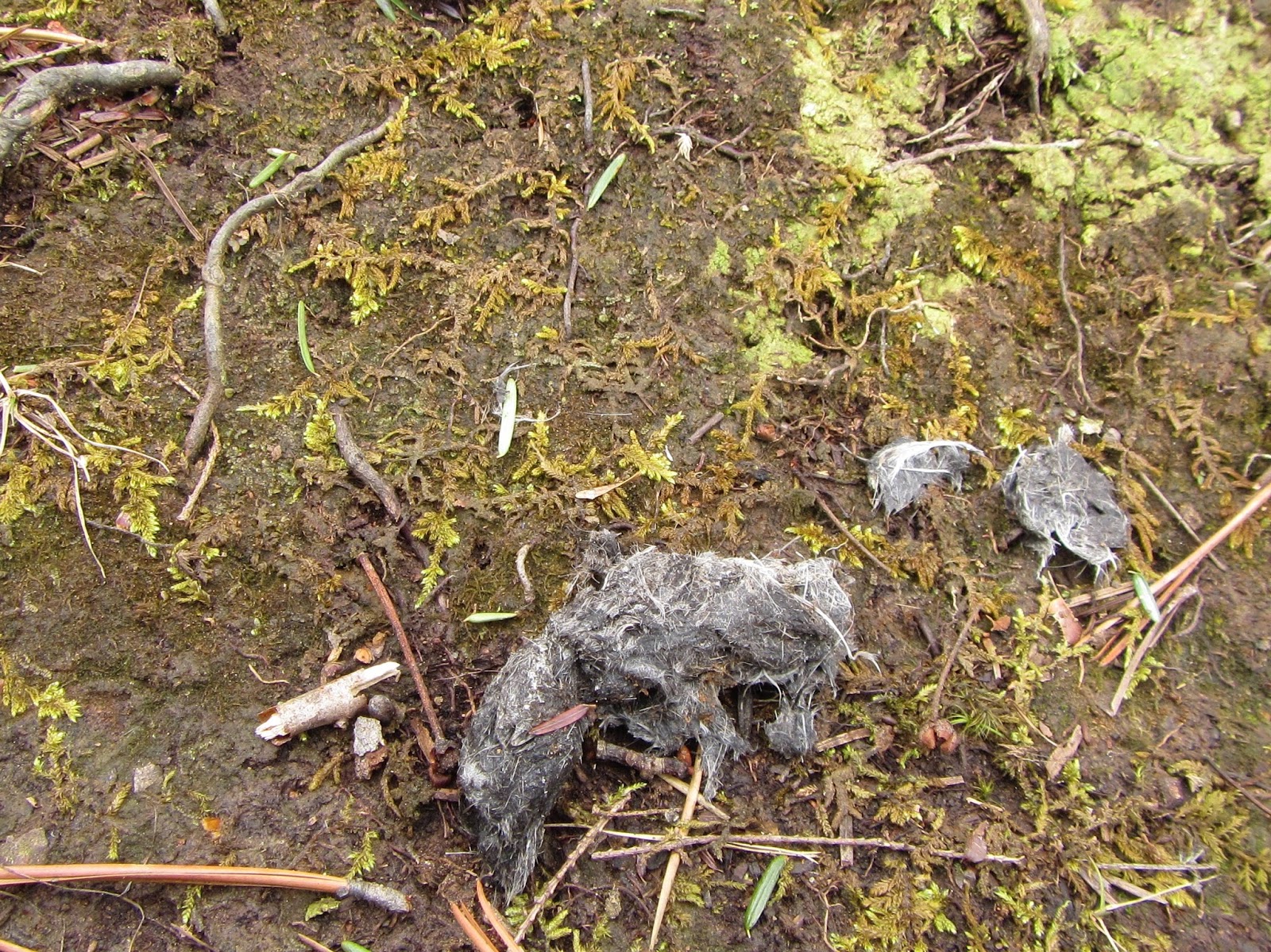 Something else I had packed instead of my heavy DSLR gear was some Yaktrax in case I ran into some snow on the trail.  Since I ended up climbing 1.5 miles up the side of a mountain they ended up being very useful indeed.


I also got the ingenious idea to use the flap on my unzipped pack as a seating pad.  Must have been all that oxygen I was getting to my brain.  Dry pants are important.

With my footing secured I was free to enjoy the climb and take in the views.  Even though there was snow on the trail it was 40F with only the occasional gust of wind and with all that exertion I kept warm easily. 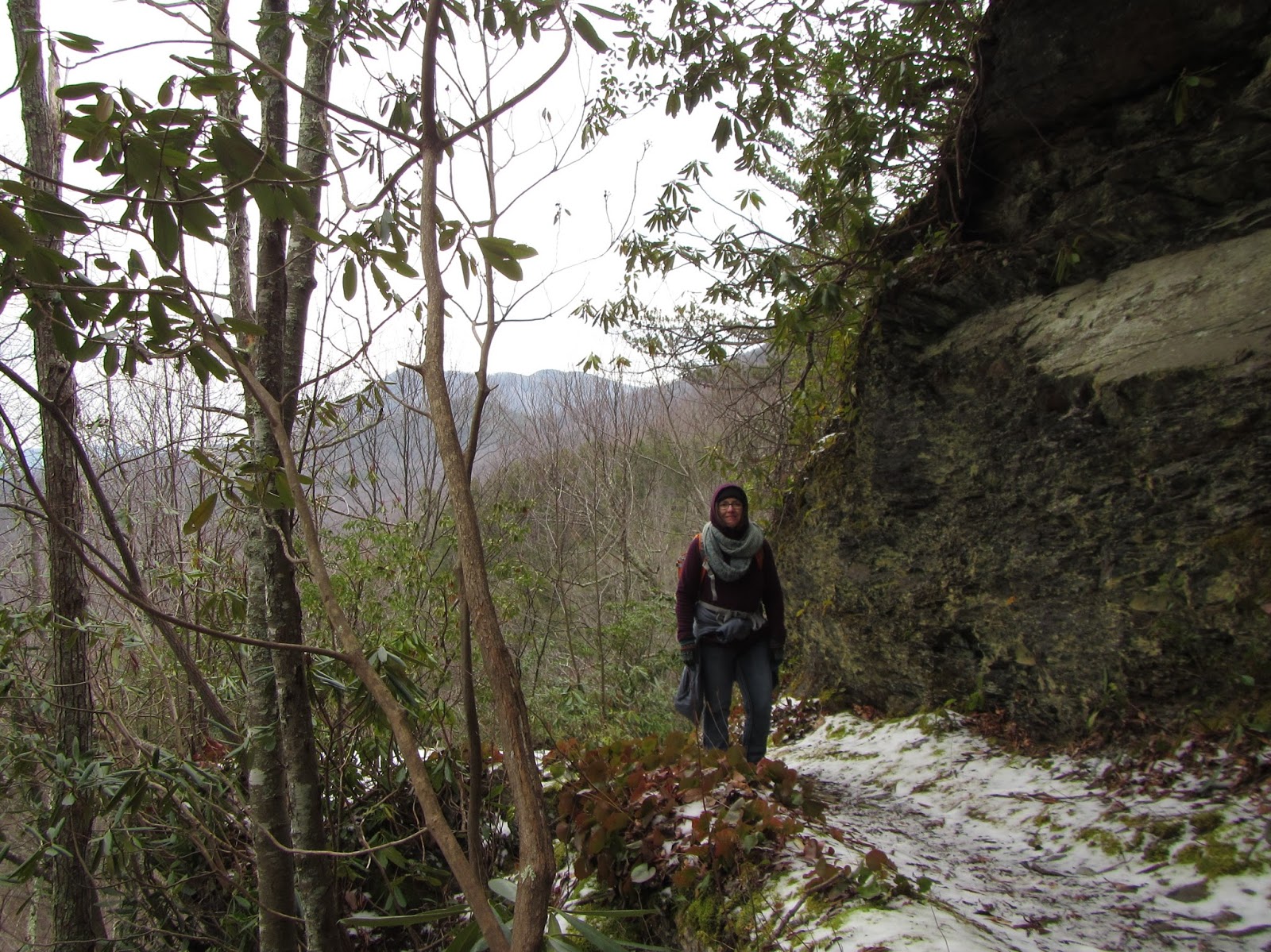 The snow looked like no one but me had been on it that day.  Well, me and a few icicles. 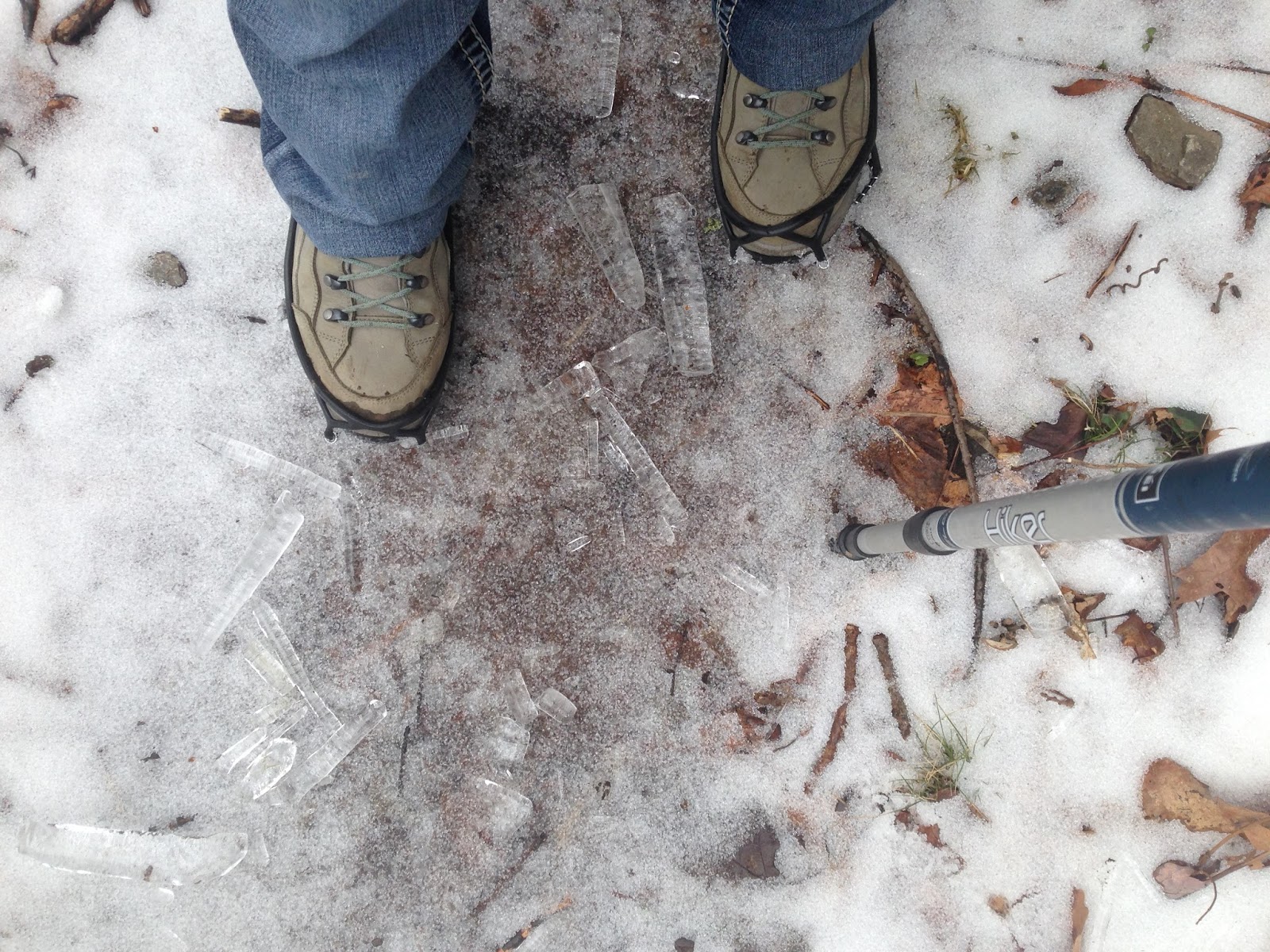 I kept hoping I'd run across a trail intersection so I could say I'd made it to a certain point before turning around but the trail just kept going up until it ran out of mountain to climb. 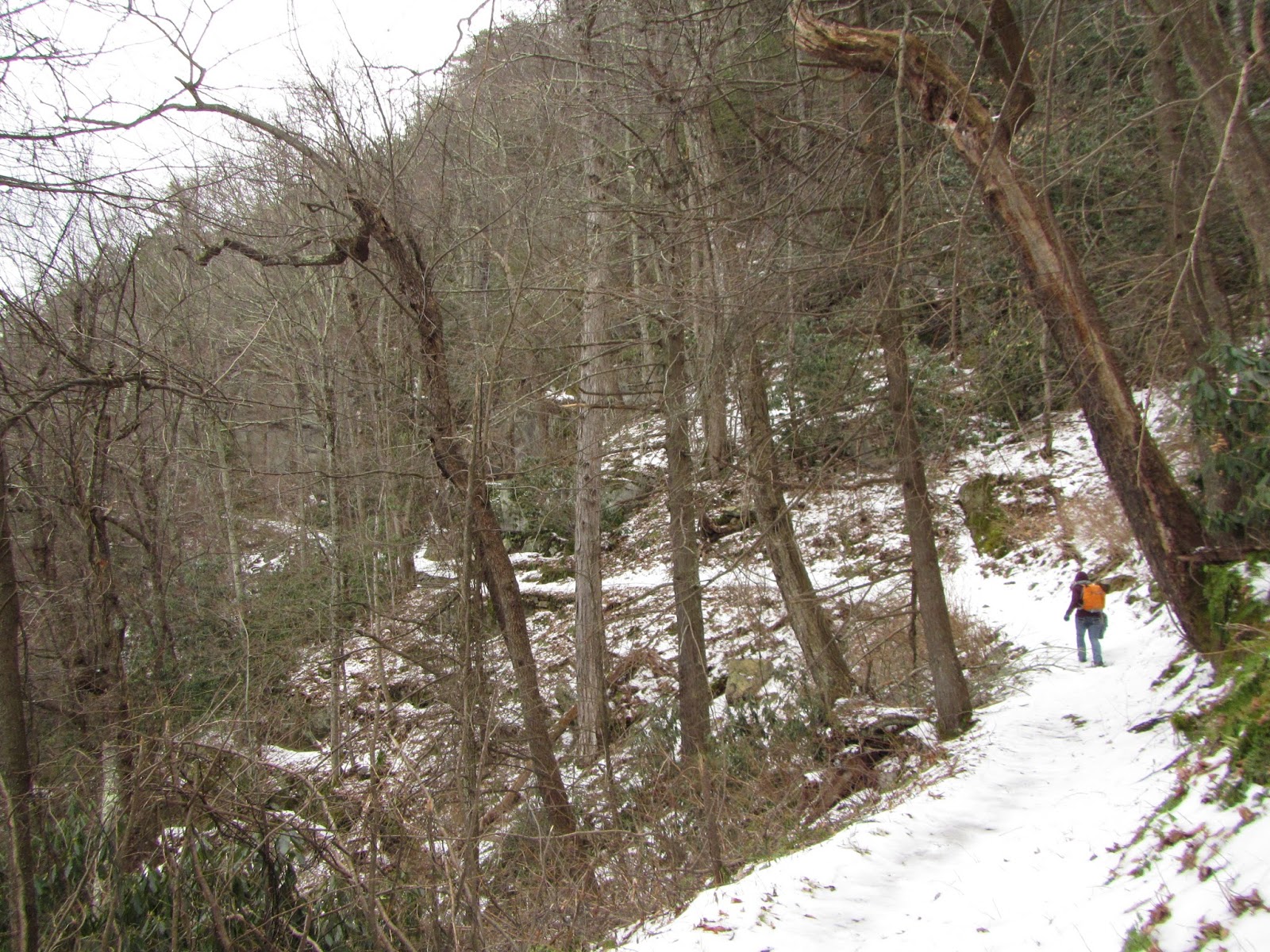 Besides the views I had lichens to keep me entertained including some rather large pieces that had blown off the rock face above me. 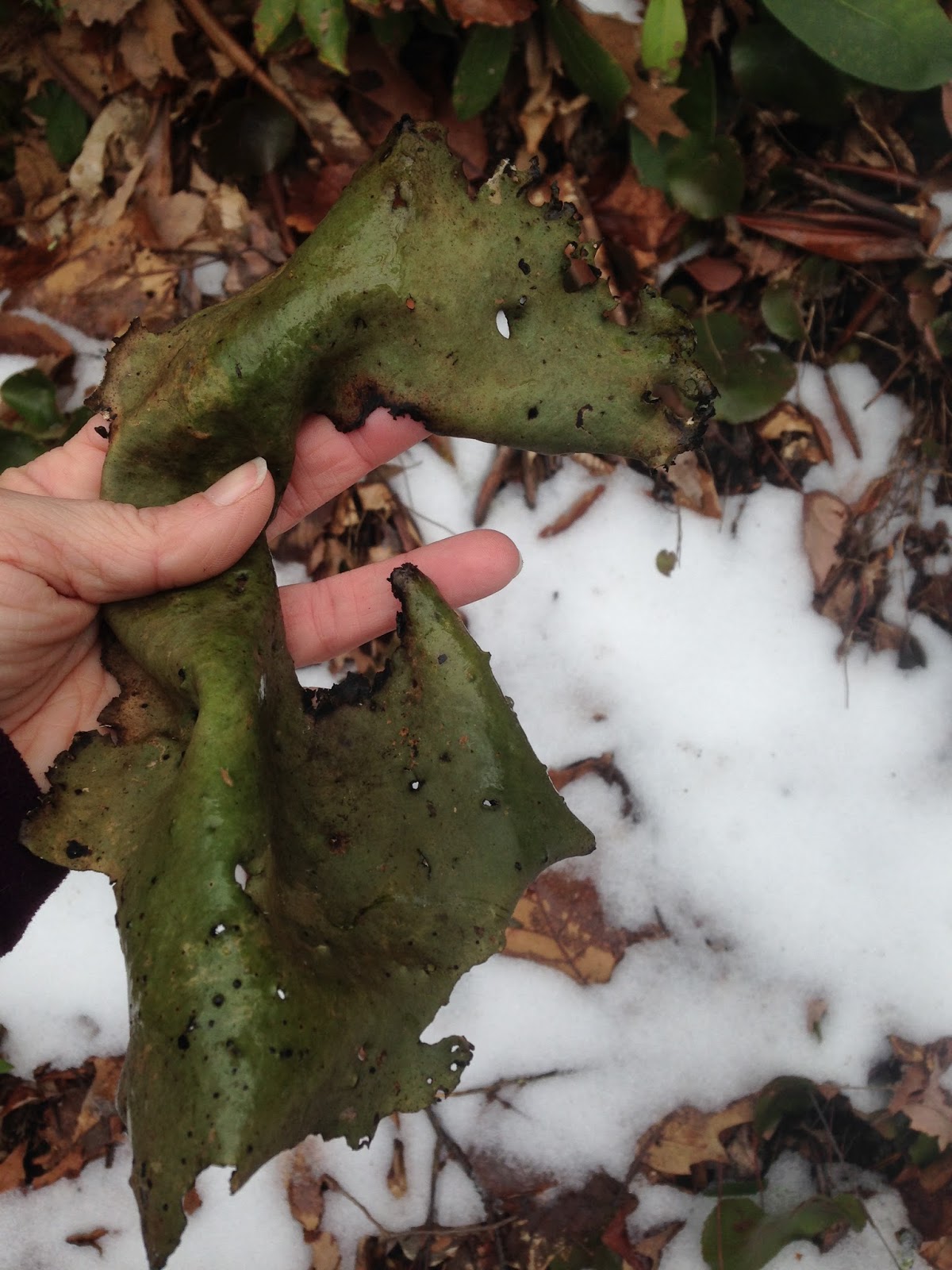 But my favorite was a new discovery just before I turned around.  I wasn't in the park 24 hours and I found 2 lichens that I needed to look up because they were new to me.  I guess I have to start packing that guide on trips. 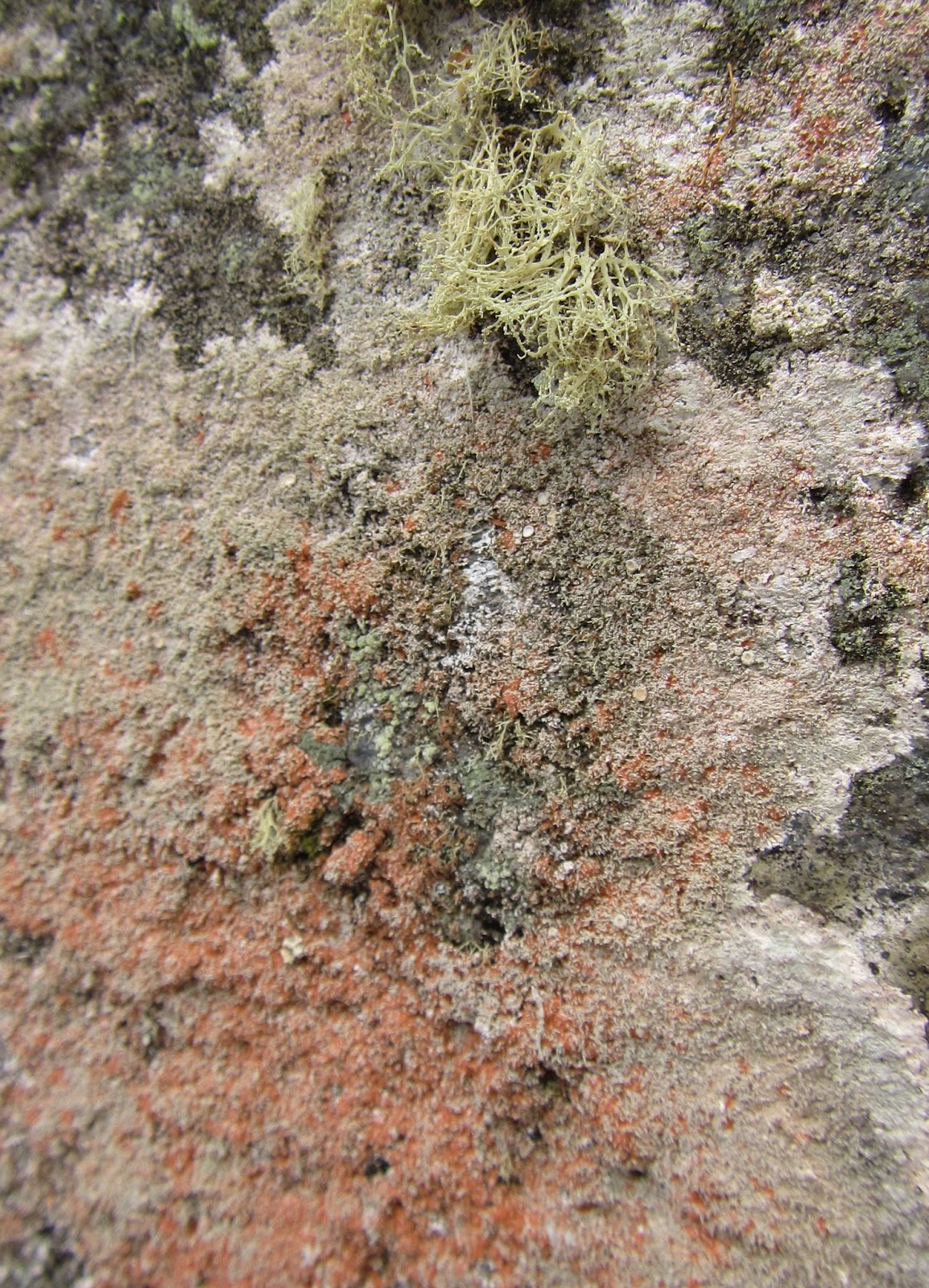 The trail leveled out and suddenly I thought I heard a human sound.  Sure enough a group of 4 hikers from Chattanooga appeared around a bend.  They were making their way down from the Lodge at Mt. LeConte and informed me it would be a long way if I kept going.  I let them pass me by and took a short break before turning around.  I caught up to them a little later and we chatted for a few more minutes before they stopped for a break and I continued on to the bottom on my own. On the way down I kept a quick steady pace and with the timing I figured I must have gone about 1.5 miles up after I turned onto Bull Head.  With the 0.4 mile addition on Old Sugarlands I estimated I hiked about 4 miles.  Not too shabby for a "quick hike".  It only took me a little over 2 hours and Cory was just waking up when I got back.  Traffic in Gatlinburg on Superbowl Sunday was nonexistent, we picked the perfect time to come...especially to escape the blizzard conditions back home in the Midwest.  Sunday it snowed and blowed all day back home and here in Gatlinburg we're worrying that we might get less than an inch today because the temperature might actually hit freezing. I knew it was a good time of year to get out of Chicagoland!