When we stopped in Terre Haute to find the post office mural that didn't exist we drove by the Vigo County Courthouse and I dashed inside for a quick look while Cory waited in the car.


The French neo-Baroque building is constructed of Indiana limestone and was finished in 1888.  Look at that cast iron railing on the roof.  Wouldn't it be fun to walk around up there?  Well, my daughter Katrina wouldn't think so, but I sure would! 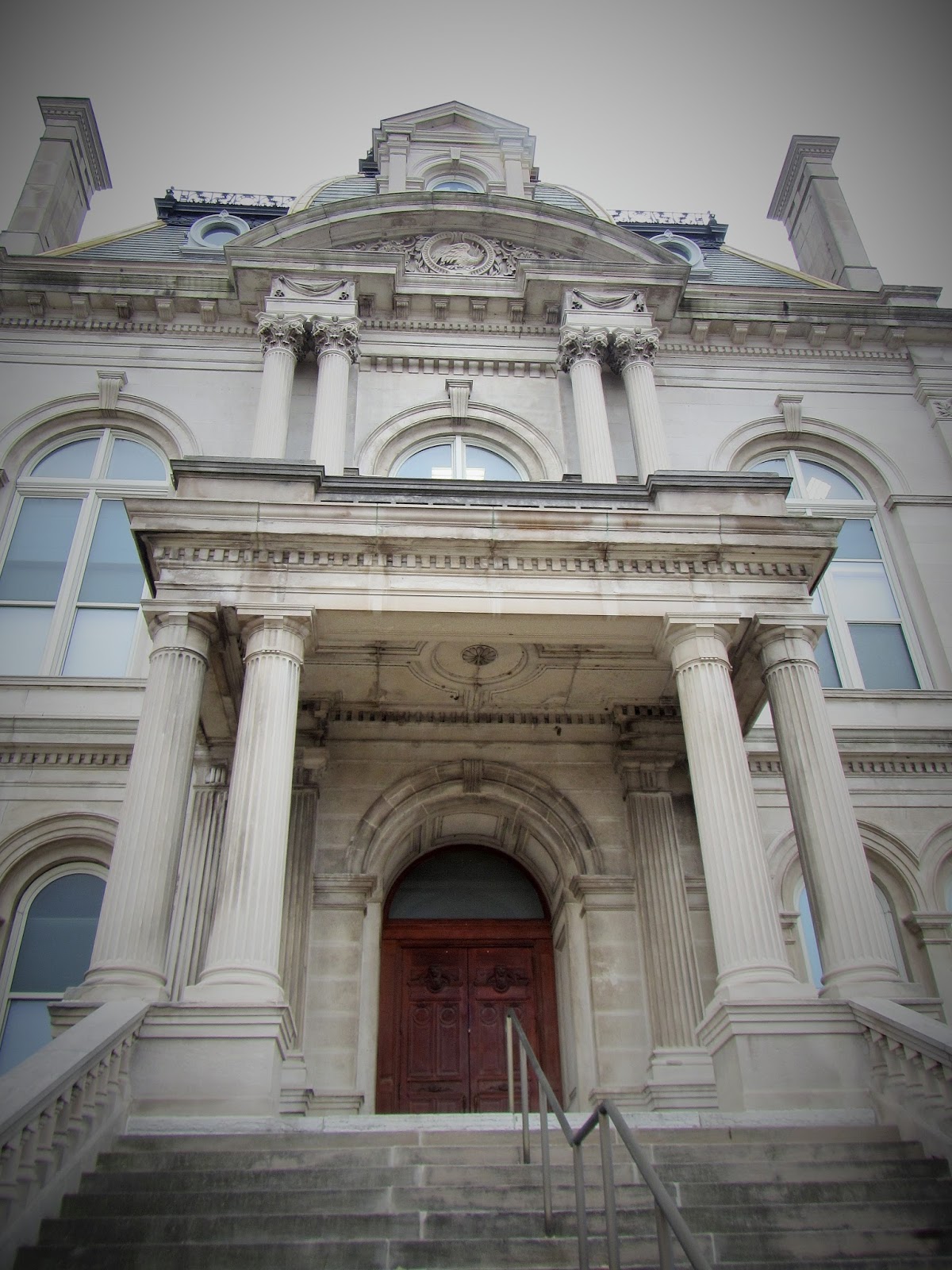 Hidden from view as we went zipping by in the car was this great set of wooden entry doors.


The interior underwent a restoration in 2007 and they've done a beautiful job.  If you want to see the bell that Francis Vigo helped pay for you can click here.


The stairs were even pretty, and the baluster at the end had what I guess you'd call a brass finial. 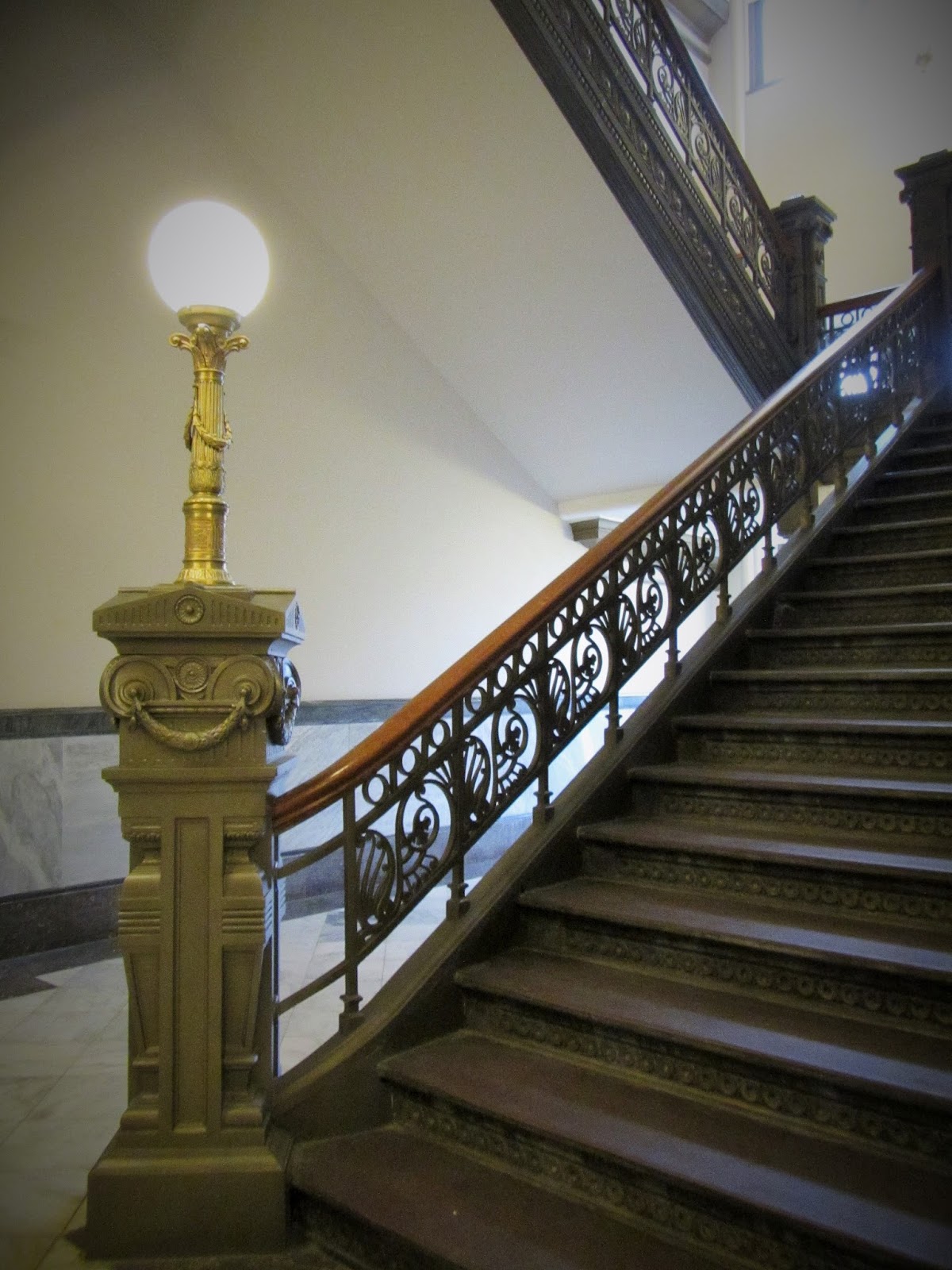 Driving around the area it was apparent that the Freemasons are a big thing and I'm wondering if the floor design in the rotunda is Masonic, does anyone know? 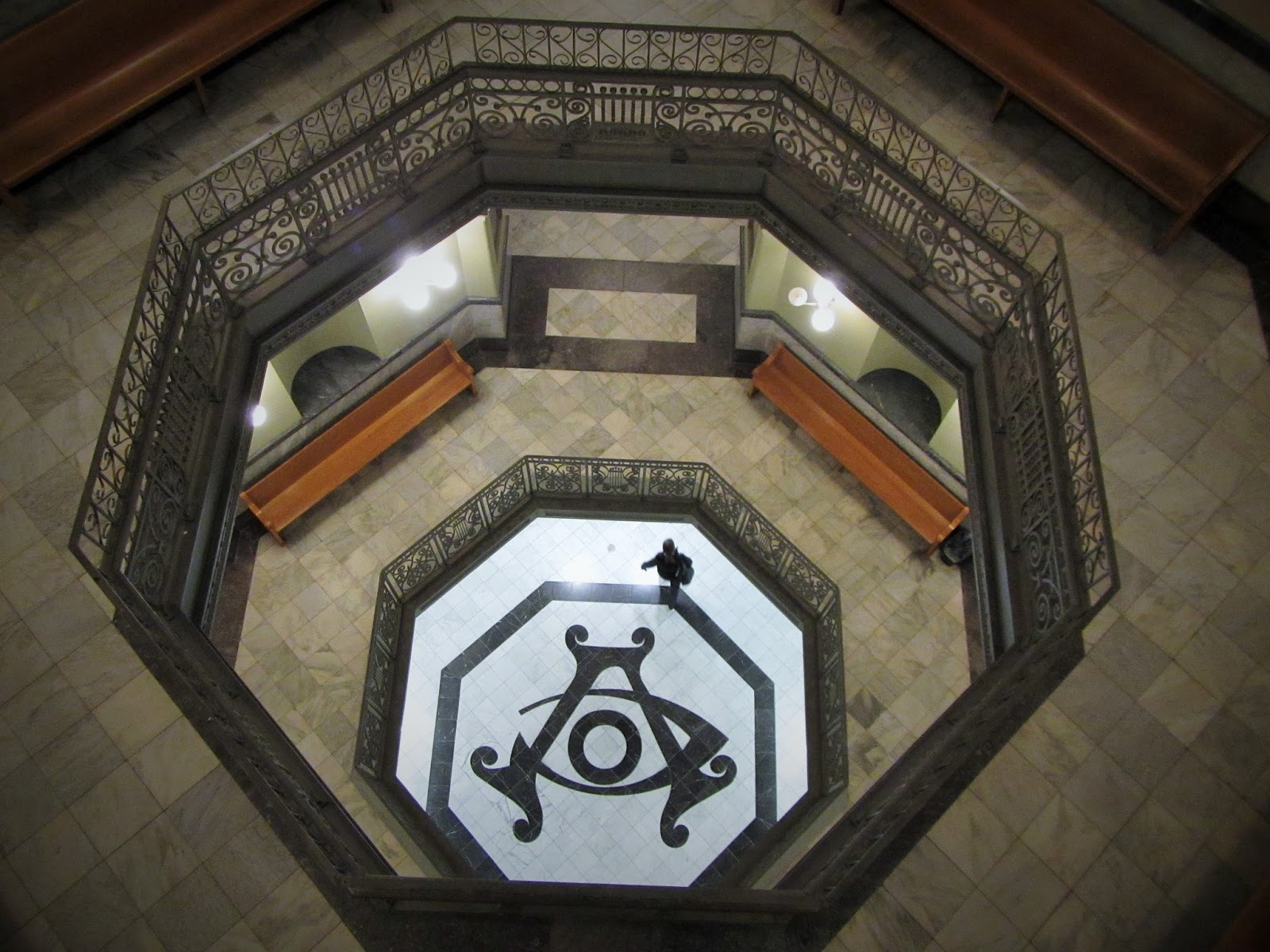 On display on the first floor was the clockworks for the original tower clock.  For more than a century, the clockworks stood inside the courthouse dome with four, long iron rods extending to the faces of the four clock faces. Those rods slowly rotated, moving the hands on all four clock faces at the same time, and someone had to climb the stairs every day to wind it.  The company that made the clock in the 1880s, the E. Howard Clock Co. of Boston, Mass., guaranteed it to operate for 200 years, and it was still functioning about two years ago when the county switched to a fully electronic system, can you imagine that?  They don't build things to last that long anymore. 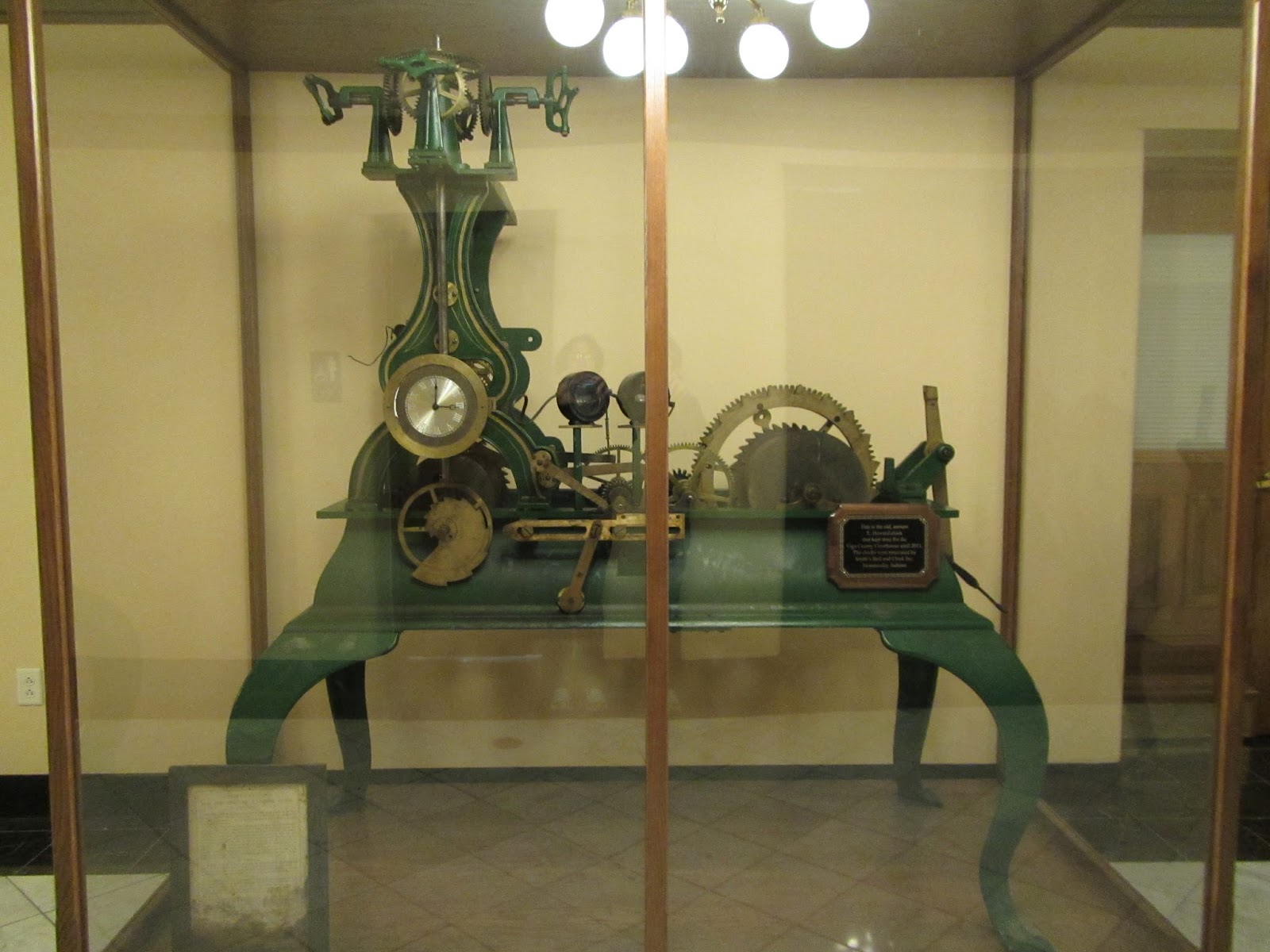 The first floor of the rotunda features four murals painted by local artist Bill Wolfe.  In the first one the artist chose to portray Vigo County as the crossroads of America, highlighting different types of travel including a steamboat that would come up the Wabash River and the old Wabash & Erie Canal. 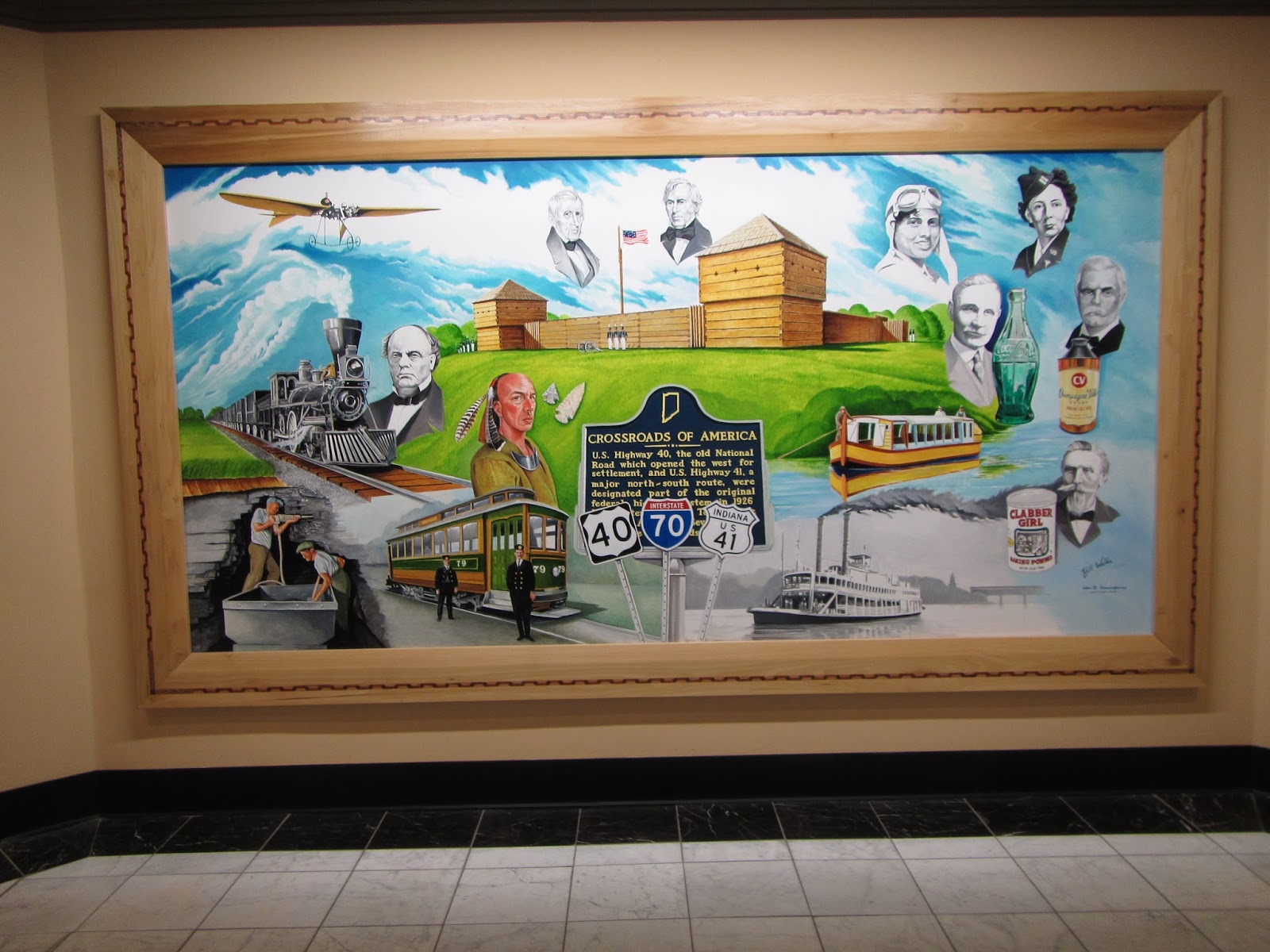 The second painting depicts key events in Francis Vigo's life.  Vigo, born in 1747 in Mondovi, northern Italy, took up the American cause in the Revolutionary War, helping to fund George Rogers Clark with money, supplies and information to help Clark recapture Vincennes from the British. 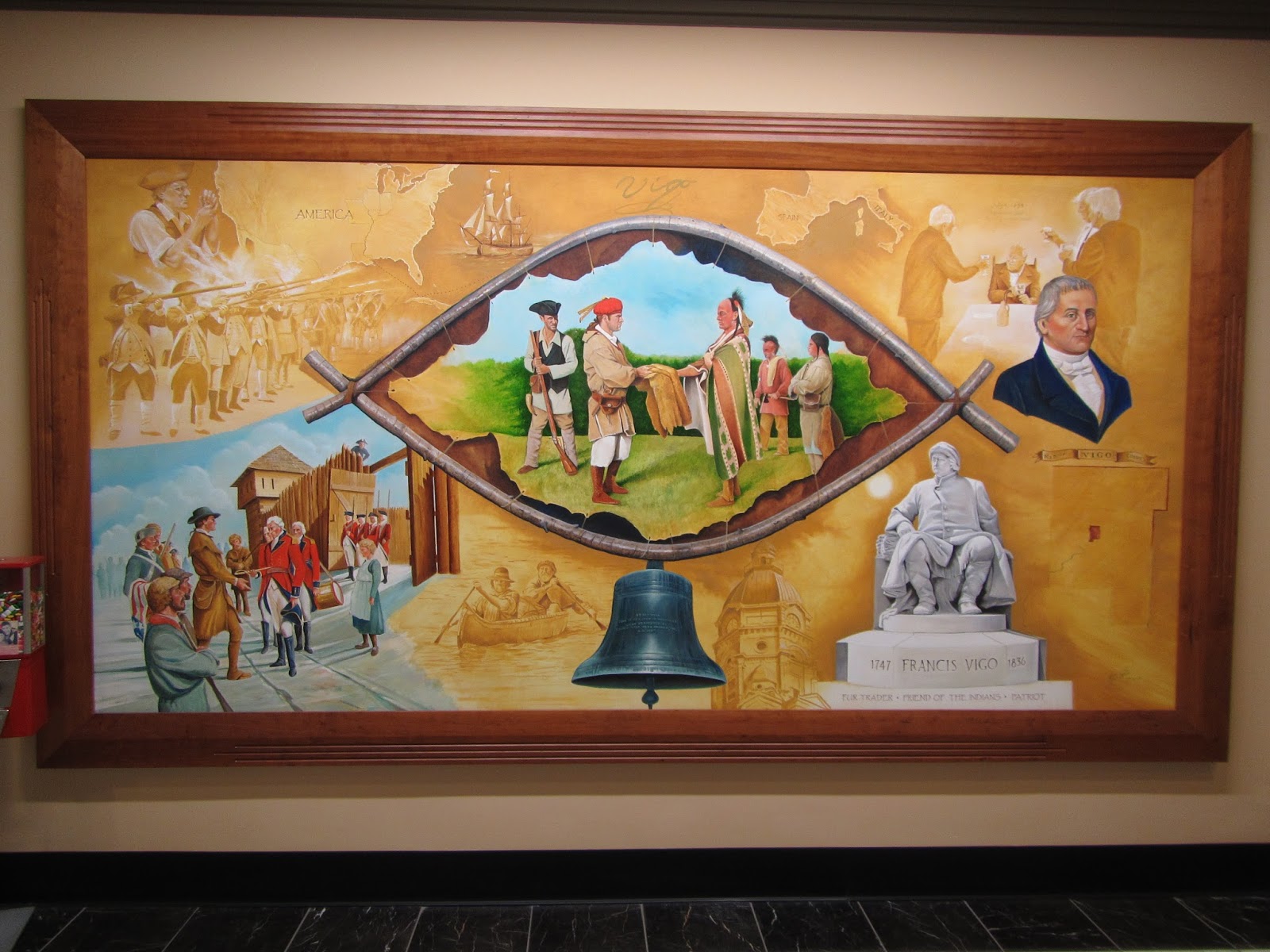 The frame around Saint Mother Theodore Guerin's mural is walnut, weighing about 70 pounds. It was crafted by Keith Ruble, superintendent of the Vigo County Parks and Recreation Department. About half of the wood came from the same walnut stock used to make the tiny casket holding the partial remains of Guerin in the Church of the Immaculate Conception at St. Mary-of-the-Woods.  Wolfe’s mural shows Guerin as an infant, a young lady walking along the coast of her native France and as an adult.  She is the eighth U.S. saint and the only Hoosier to achieve that status. 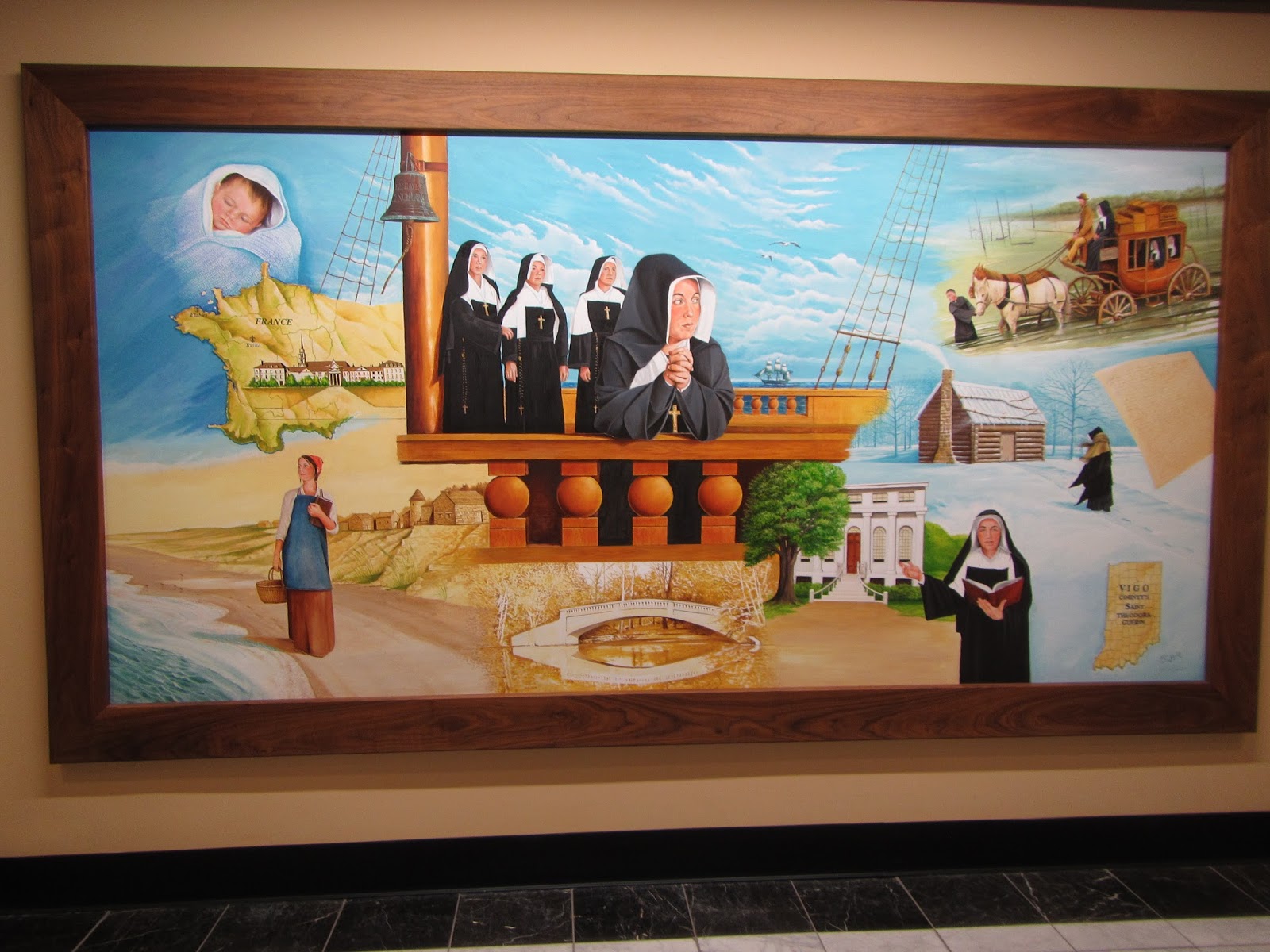 And lastly there is a mural depicting the likenesses of 52 Vigo County people influential in politics, education, the arts, entertainment and sports. 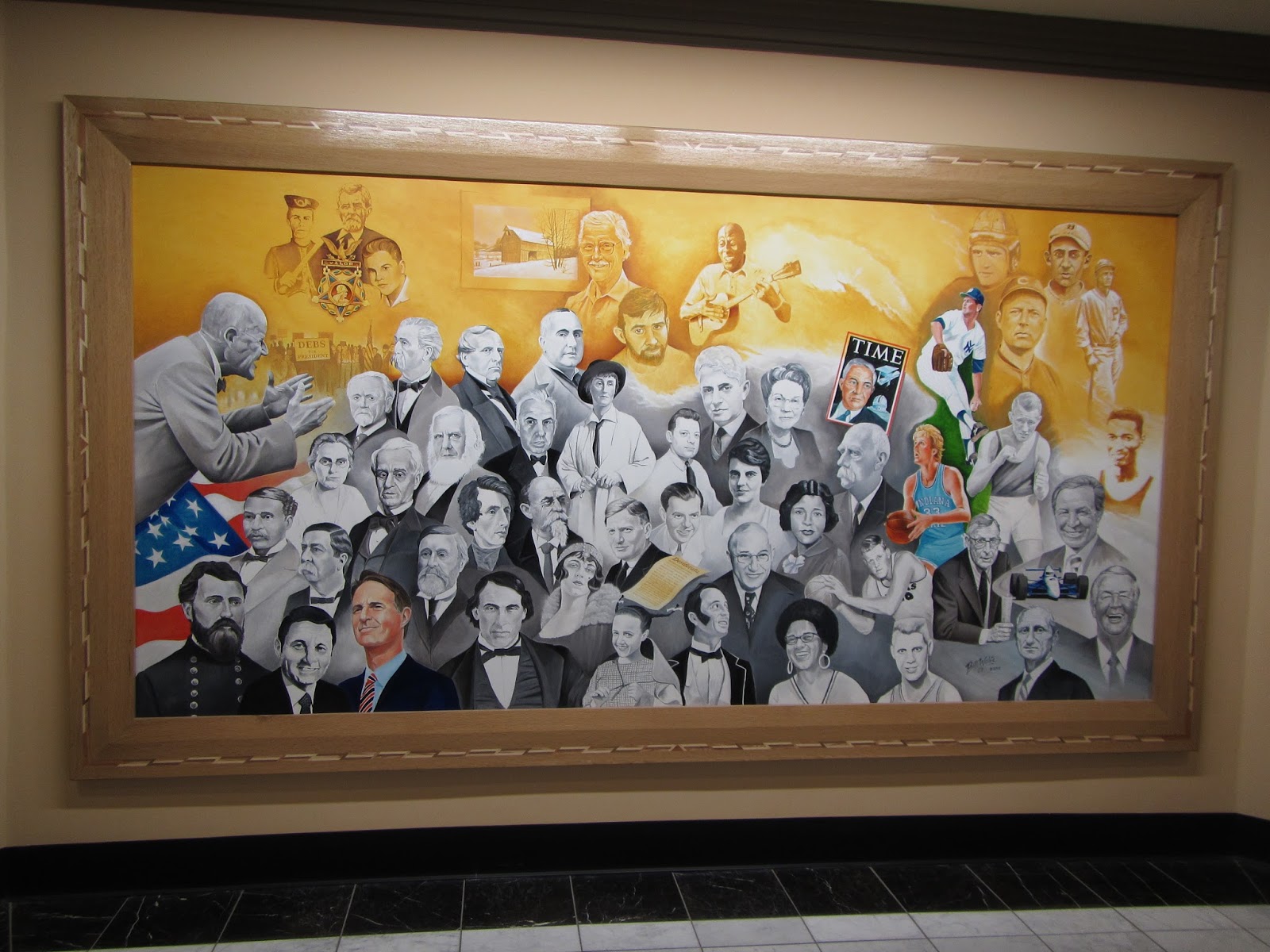 The cable was out yesterday, so in addition to getting out of the house in the sub zero temperatures and forcing myself to go to the gym I got caught up on a lot of blog reading.  Don't worry, it won't take me long to fall behind again.

I might head over to Kettle Moraine on Saturday, the temperature might climb to freezing (sigh) and in the woods I'd escape the wind.  I'd complain a little louder except I see the Midwest is not the only area of the country suffering from below normal wintry conditions.  I'm also considering a solo trip the first week of March to either Sheboygan or Indianapolis, weather depending.  I tried to talk Wayne in to going along, but apparently 10 hour days start next week and he anticipates picking up an extra day on top of that.  He may get a lot of vacation days a year, but he sure makes up for it in between, let me tell ya!
Posted by Pam at 10:30 AM