Wayne wanted to go to the George Street Festival and the St. John's Regatta so I let him do that with his nephew while I made my own plans. The Royal St. John's Regatta is North America's oldest annual sporting event with documented proof of boat races going back to the year 1816.

This year was the official 200th anniversary and the Townies partied all night long, including these fellas who were barely back from carousing when I came to get them the next morning! 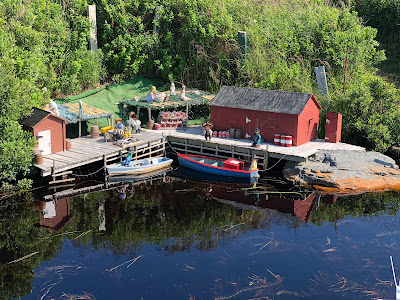 While the b'ys were at the Regatta I was motoring down highway from St. John's to La Manche Provincial Park.  In Witless Bay I saw some boats bobbing in the water that were created by a local carpenter from Mobile. 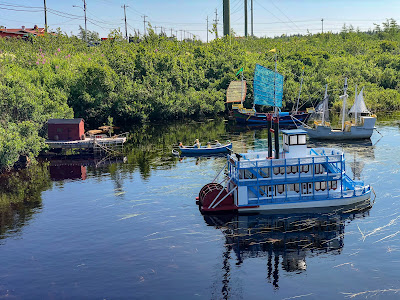 Reportedly they are even for sale if one catches your fancy. 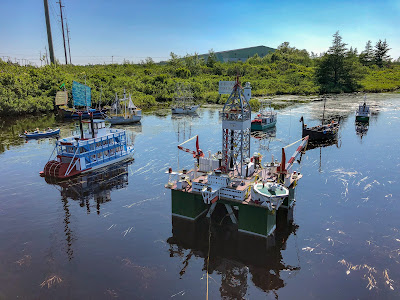 The 300 folks who call Tors Cove home have a lovely view of Fox Island.  The whole area from Bay Bulls to Tors Cove is a great place to visit with whale and puffin tours available. 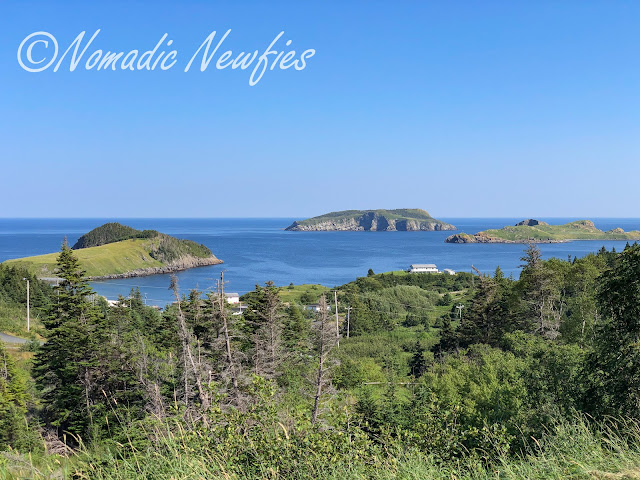 But I wasn't after whales and puffins, I was looking for a night outside in my tent and a good hike.  Maybe my tent will smell like Newfoundland next time I unpack it!  A word of warning to tent campers, it seems to be the norm on The Rock to sleep, well, on rocks.  Bring a thick air mattress or a cot if you've got one. 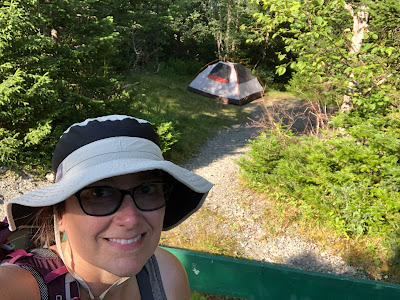 The campground at La Manche was pretty good, some sites even big rig friendly.  BUT...when I asked about how to access the old La Manche village and the East Coast hiking trail I was told to walk through the campground and up the fire exit road. I asked if there was parking and the attendant just said no so off I went.  After walking 25 minutes, most of it up a steep hill, in the blazing mid-80's heat carrying 25 pounds of gear on my back I was beyond irritated to discover a parking lot at the trailhead.


TO ACCESS TRAILHEAD - drive 1 km past park entrance on Highway 10 and turn onto La Manche Village road.  It was getting late in the day and that is another hour I could have had on the actual trail, but we'll put that aside now and I will know better next time and so will you! 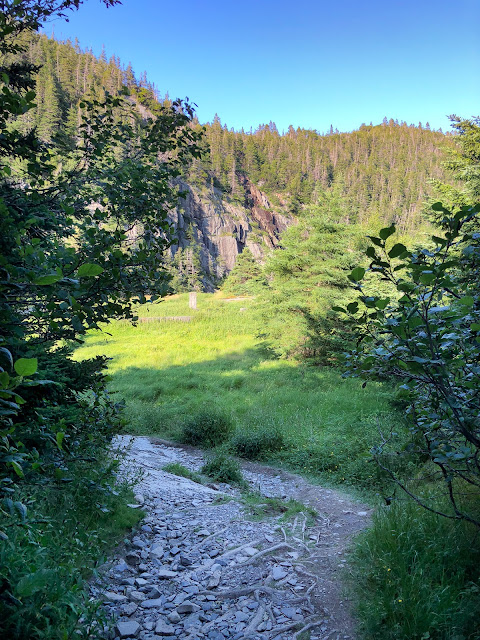 After another 25-30 minutes of hiking, mostly in the shade, I came to a lovely swimming pond just before the La Manche suspension bridge. 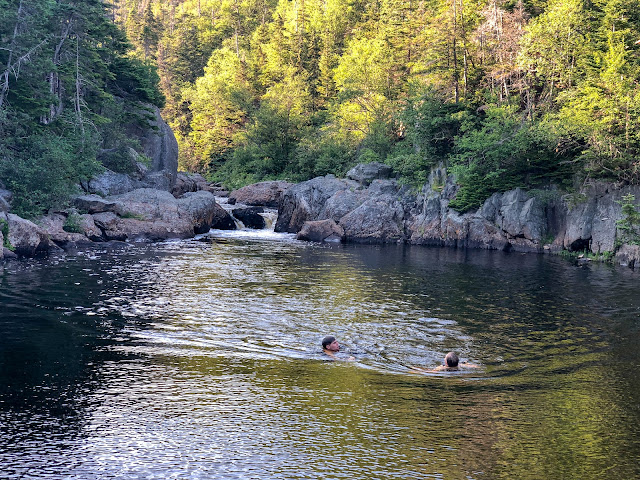 Some young gents were playing Willie Nelson and a few others were swimming, but since I wasn't prepared for this I had to satisfy myself with clambering down the hill and cooling my feet off while listening to the cascade of water over the rocks at the end of the pool. 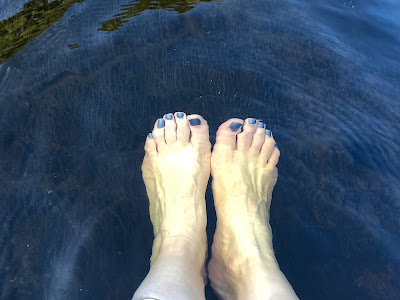 After getting back up the small hill I set off past old foundations in the abandoned village of La Manche to see the suspension bridge. 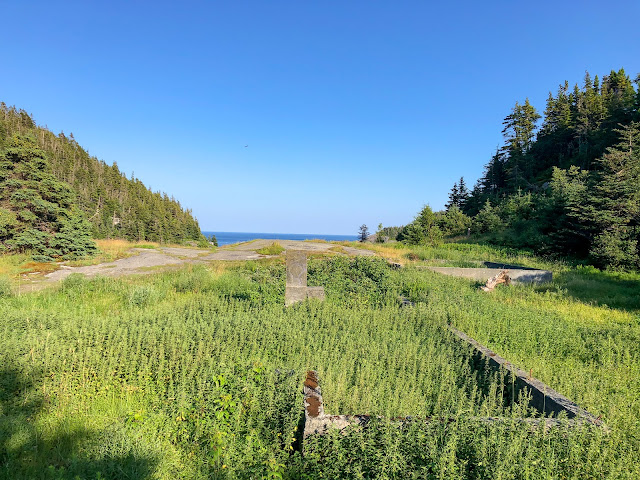 La Manche was settled in 1840 but was always a very small community ranging from 7 to 55 inhabitants over a 100-year span due to its rugged terrain which prevented having many flakes for fish drying. 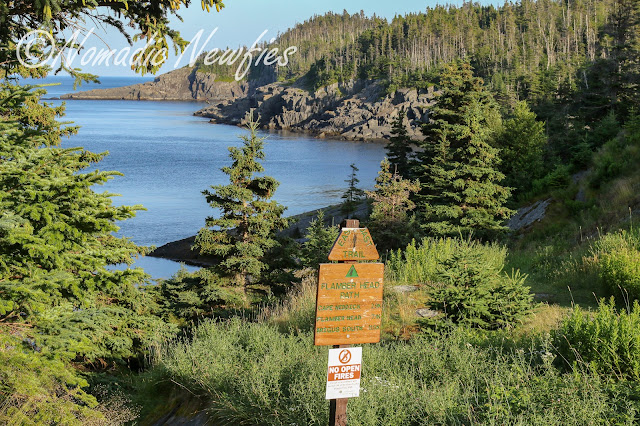 In the mid-1960's the community was under pressure to resettle into larger, nearby towns. The road leading to La Manche was difficult and expensive to maintain, particularly in the winter.


On January 25, 1966 a severe winter storm hit the east coast of the Avalon Peninsula. An enormous tide washed away all the flakes, boats, anchors and stores of La Manche as well as the suspension bridge which connected both sides of the harbour. Most of the houses were demolished, miraculously there were no deaths attributed to the storm. The entire economy of the village was destroyed so the residents of La Manche agreed to be resettled by the provincial government. 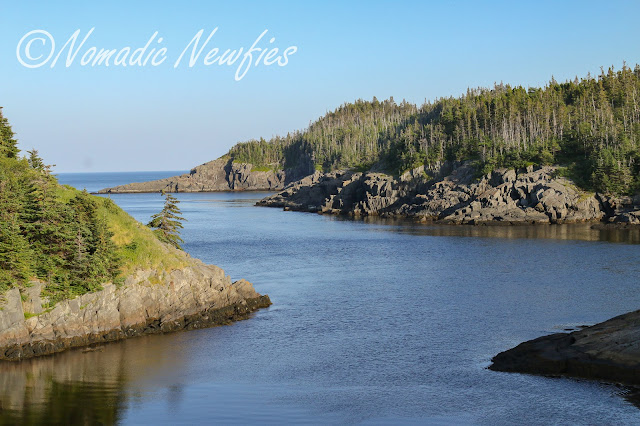 In French "La Manche" means "the sleeve". The area is named for the shape of the harbour, which is long and narrow with high sides. 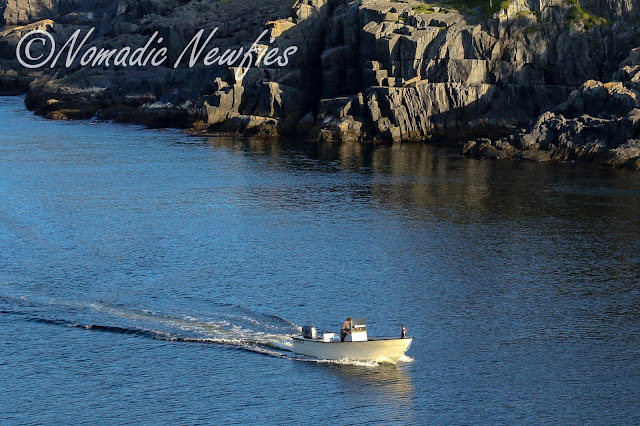 A dory came down the cove, captained by a small dog.  As if I didn't have enough to smile about! 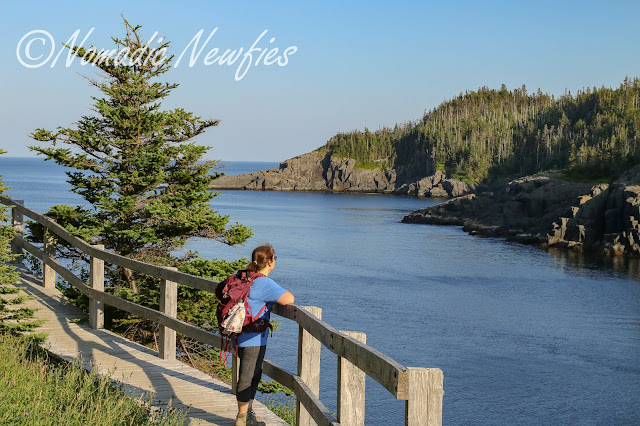 The water near shore was clear and green, and no black flies or mosquitoes attacked me when I stopped to admire the view. 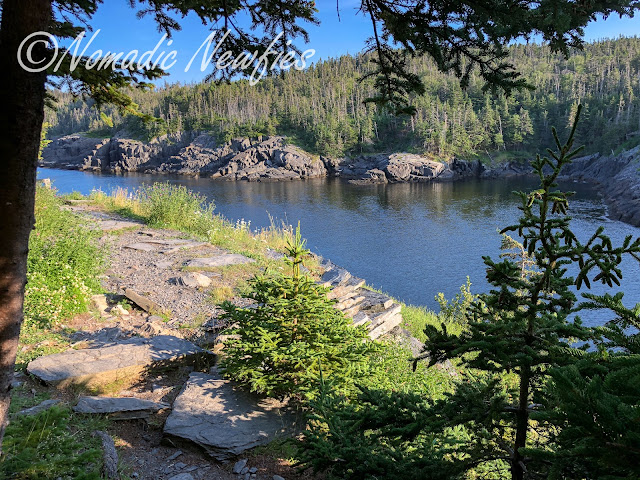 Of course the trail continued on but the sun was getting lower in the sky and I had to turn around. 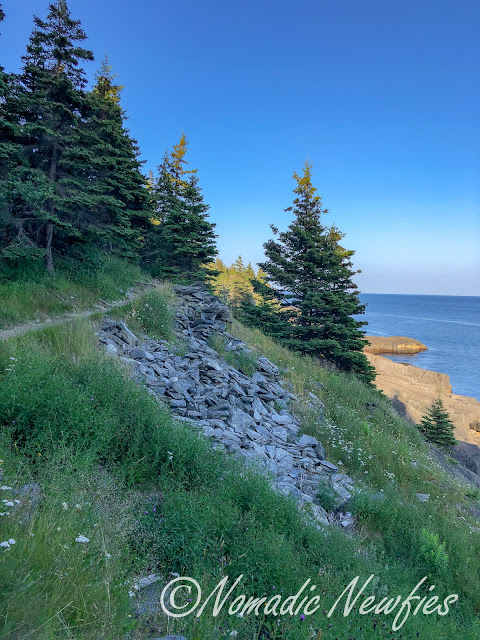 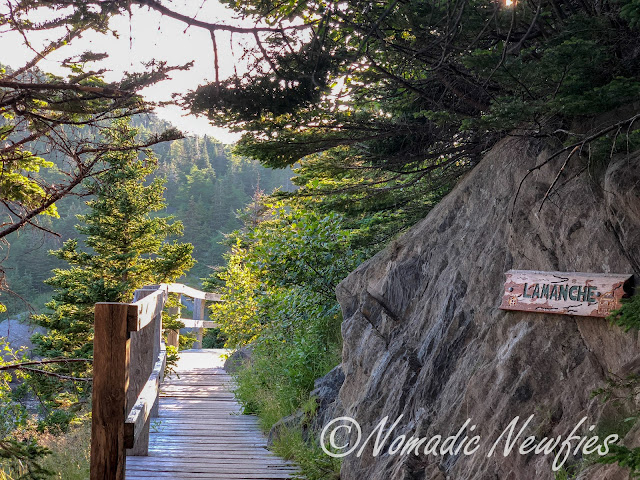 A shocking total of 307 towns and villages in Newfoundland were resettled. Over 28,000 individuals had to say good-bye to their ancestral homes and start over. 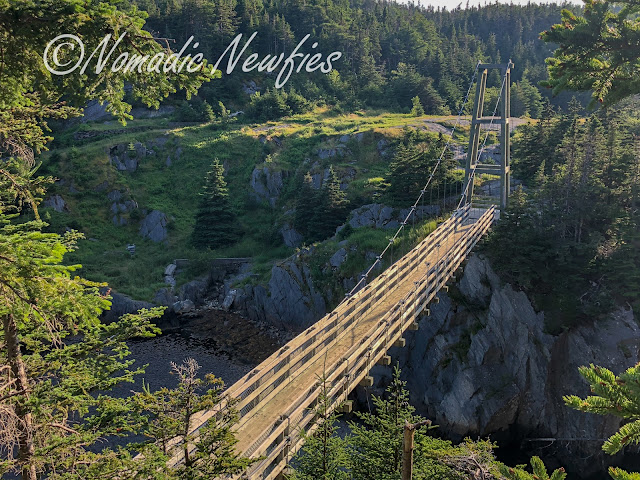 Back across the gently swaying suspension bridge I went, with a last longing look down the cove I began my return hike. 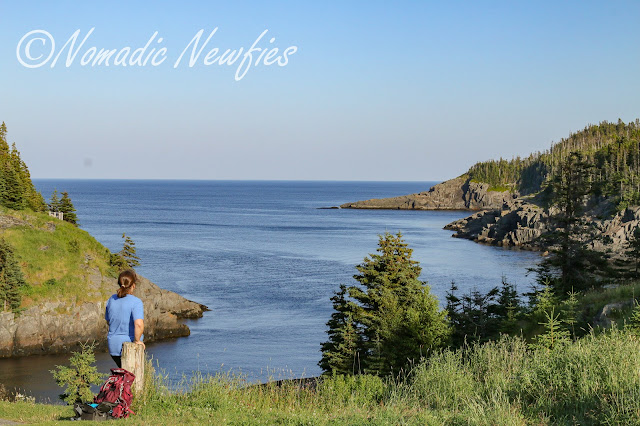 I'm absolutely going to do some more hiking on the East Coast Trail...someday.  My cousin Darryl hikes the trail, maybe next time we can go together and pitch a tent, hopefully on a spot with grass instead of rocks!
Posted by Pam at 8:20 AM