I talked my Uncle Matt into taking me out to the abandoned mine in Argentia, which was a great hike with lots of new history information for me to leartn.  Petite Plaisance was Argentia's original name when it was first settled in the late 1600's as a part of the French settlement of Plaisance (Placentia).  At first it was a small French fishing village and in 1687 the population was only 35.


In 1768 there were approximately 139 people settled in the community and by 1797 the population had more than doubled to 226 residents. During the early 1800's a large number of Irish descendants immigrated to Little Placentia. By the year 1845 the combined community population stood at 573.


Prospecting for lead began around 1880 and the first vessel of ore sent to England sank losing the cargo and all aboard. A small amount of silver was found along with the ore, and in 1904 the Parish Priest of the time, Father John St. John, successfully had the community renamed Argentia after the  the Silver Cliff Mine - "argent," being the French word for silver. Not much reward followed mining efforts so it was abandoned for 40 years, and then the mine re-opened with intermittent operations until the mine closed in 1925.


Now for the geology speak which I copied for anyone who can understand it: The Silver Cliff abandoned mine workings are hosted in tuffs and include a drift, a shaft and exploratory workings in a vertical vein system. The vein occurs in a brecciated fault zone with galena and sphalerite forming lenses and a matrix around volcanic fragments.


I found a report that stated bunk houses for 25-50 men, offices, a cookhouse, carpentry and blacksmith shops were on location in addition to the mill itself and the 375 foot Ingersoll Rand belt compressor and a 75 HP internal combustion fuel oil power engine.


The failure of the oil engine in 1924 was a huge financial burden as the mine could not repair it to run reliably, wasting time and resources that they could not afford. It was about a year before they were able to obtain outside power from the electric company and operations did not continue for very much longer after that.  A transmission line of 60 miles had to be built to bring in the power.

There were also trace amounts of gold found, but seeing as how no one is out in the brook prospecting for gold I wouldn't show up with supplies hoping to strike it rich!

I wonder what could be found here with a metal detector?  What objects of daily life lay under the soil and in the brook from the men who worked there? 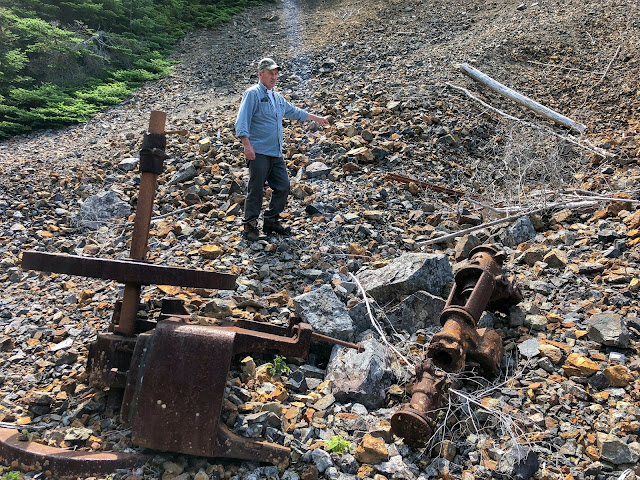 My Uncle Matt says this is where the opening to the mine was located and it was blasted to close it off when operations ceased.  What happened to the people who were working there?  What jobs did they take afterward instead? 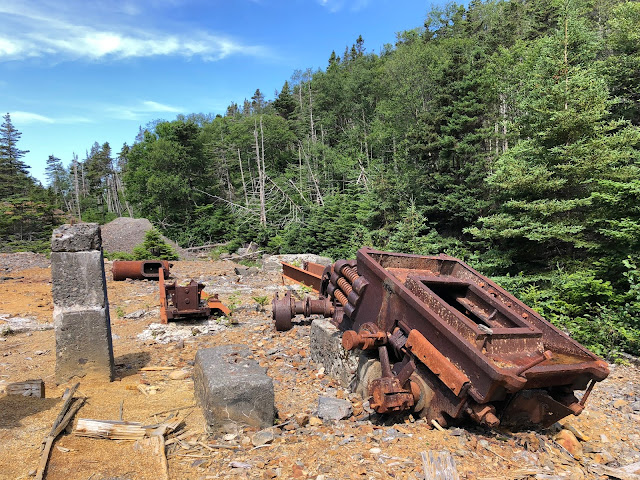 The main fault underlies the brook flowing north-northwesterly into Placentia Bay.  The brook was on our right as we moved past the equipment and some of it was in the creek itself.  Uncle Matt says my grandfather and his siblings used to play down here. 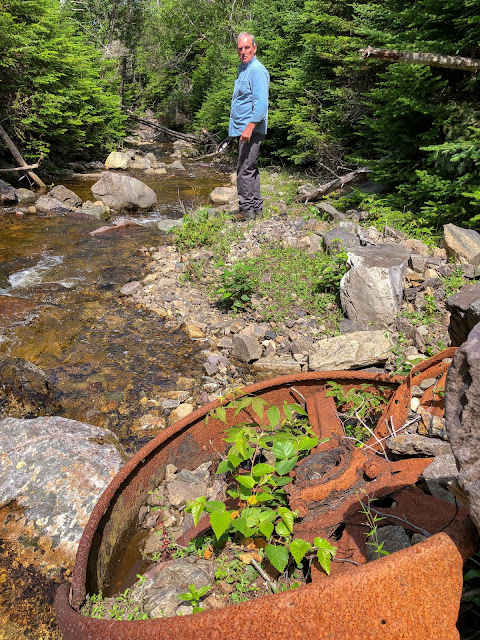 I think he said it was Aunt Agatha who told him there used to be a large wooden wheel for the mill that they used to play on in the creek.  I can only imagine the scrapes and bruises those children came home with on a daily basis! Still, they all survived, right?


I'm smiling in the photo above, so maybe that was before Uncle Matt told me it was a good day for the black flies. And I'll guarantee you it was before I realized the trail we would be taking next was completely overgrown. 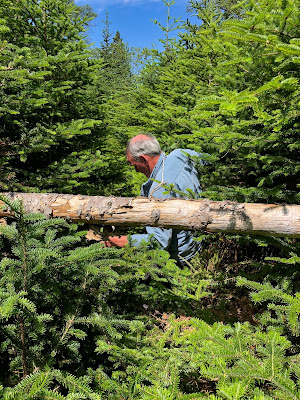 Still, you know how I love an adventure, and with someone along who knew the way I wasn't afraid to beat my way through the tree limbs.  We alternated between walking in the trees and along the brook when it was possible. 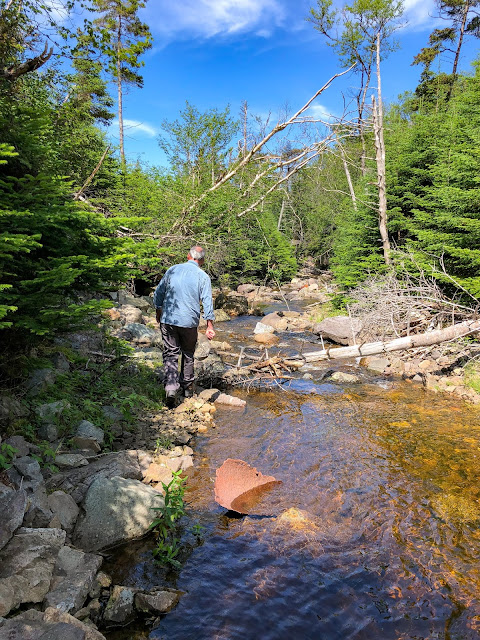 Uncle Matt commented that he should have brought along a saw and it reminded me of when I hiked with fellow hikers in the Smokies who brought along their own small saw for trail breaking. That was the hike where I saw bear cubs after I parted ways with them, but Uncle Matt and I didn't encounter any wildlife in the thick woods, only old train tracks. 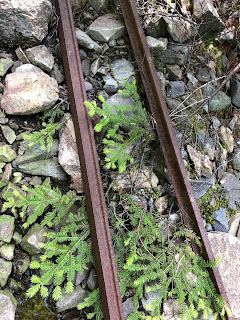 The Newfoundland Railway did have a branch out to Placentia by 1888, but these tracks were narrow gauge which was a good indicator they were directly related to the mine.  They were buried deep in the trees along our hike, it's a wonder we saw them at all.


Luckily for me Uncle Matt doesn't take retirement lying down and we moved briskly along, keeping mostly ahead of the black flies and mosquitoes.  I avoided the black fly bites until the return trip, when suddenly they discovered my presence and began their feast.


When we finally emerged from the woods I was overwhelmed to see the Isaacs up closer than I've ever seen them on the rocky beach where the brook meets the bay. 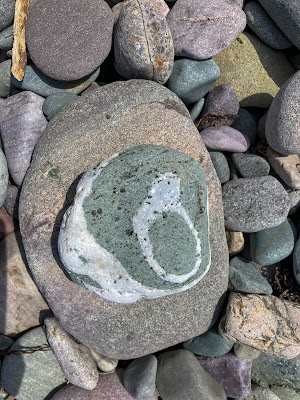 If you like collecting interesting rocks Newfoundland is a great place to go.  I took this one home with me, that is as long as Wayne didn't throw it away as he made his way home in the RV.  I'll find out later this afternoon when they finally arrive back in Wisconsin! 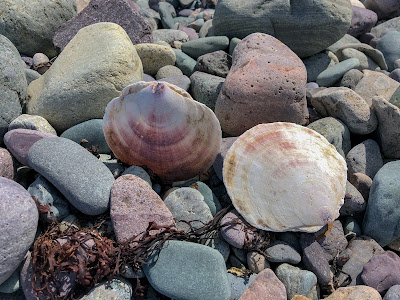 Also on the beach were a lot of scallop shells which Uncle Matt said were there because the fishermen take out the scallops and toss them overboard where they wash up on shore. 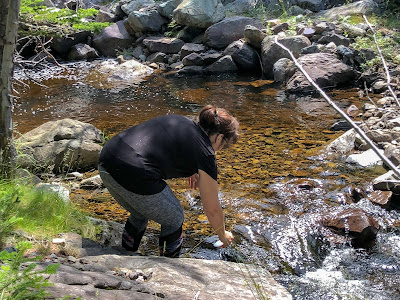 After all that bushwhacking I was sweaty and thirsty.  Uncle Matt said the brook water was fine to drink, so I grabbed a scallop shell, rinsed it off and got to work getting rehydrated. 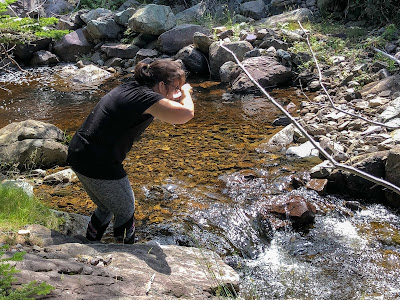 My mother was alarmed that I drank the water from the brook, but I didn't die or even suffer from intestinal upset so I agree with her brother's diagnosis.  That being said I wouldn't want to drink it as a permanent water source without having it tested for heavy metals and other contaminants, right?


I even convinced my uncle to pose on the beach with my camera perched on a nearby rock for a photo.  I would never have believed he would agree to this, but if you don't ask you'll never know!  On the return trip through the woods Uncle Matt had to rescue me when I fell backward and wedged myself between two trees, scraping my hip and thigh pretty good in the process.  As I lay there looking up with my hand outstretched he commented, "Sure wish I was the one with the camera right now!"  Ah, those Newfies, always quick with the joke!
Posted by Pam at 1:44 PM