I found another picture that shows us in Argentia when I was little, this one of me and my father.  I'm pretty sure by the view that this would have been out byhousing on South Barracks Avenue on the North Side but anyone can correct me if I'm wrong. 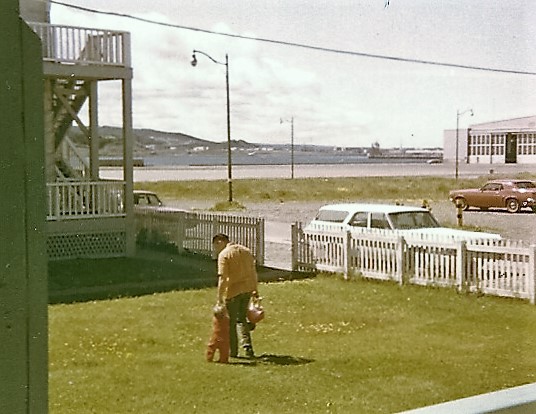 I found this great map to help me, and if you look closely you can see where the hospital would have been where I was born, it is #17 and down toward the bottom.  I haven't had a chance to show this to my Dad yet and get his feedback, who knows what stories I will hear.


Of course I spent a lot of time at my Nan's house, eating Newfoundland dirt. 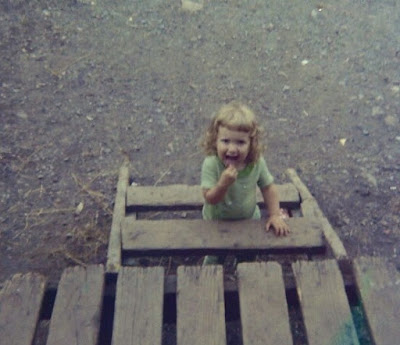 While I was eating dirt in Freshwater little Wayne was also playing in the gravel yard at his house over in Placentia... 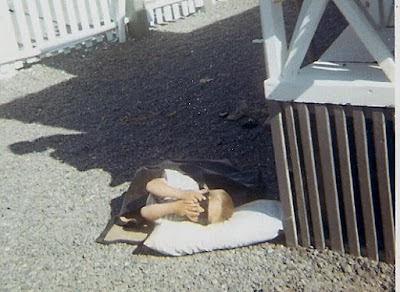 Over the years we went back for many trips which even included Christmas in 1975, when I found out about Santa after discovering the pre-written tags on some gifts.

A few years later when we were visiting in the summer we went to a garden party I think it might have been in Ship Harbour.  It appears the road wasn't paved yet in any case!


Since my mother was the oldest of 13 children and I'm the oldest grandchild I spent most of my time with Ronnie and Rosemary since they were just 4 years older than me, but I have great memories of my other aunts and uncles also and as I get older I just keep making more.


This year I've spent a lot of time digging into the history of the Whittle side of our family out at St. Kyran's much to the delight of my Great Uncle Johnny.  Despite all my persistence I was only able to learn so much about my Great Grandmother Hannah Whittle who died so young at age 24 from pulmonary tuberculosis.  I've asked around but no one has ever seen a picture of her and everyone who knew her is no longer with us.  Maybe I'll get lucky one day and learn more,  I'll keep at it.

There are a lot of connections between Wayne's family and my own.  His mother and my grandmother were school mates back in St. Kyran's, his father and my grandfather both worked on the boats for CN for many years, and his sister Mary and her husband own the grocery store in Freshwater so they know everyone who "belongs" to me as they say up there.  Their daughter married one of my cousins too!

When we go home I try to get my Nan over to visit his mother and even though she is 90 years old she grabbed her cane and we whisked her off to Placentia again this year. 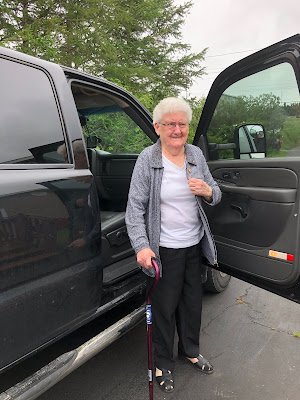 It always warms my heart to see these two reconnect.  They both had tears in their eyes and so did I.

We stayed almost an hour while they swapped stories, and I learned a few new tidbits like Wayne's mother worked in the Priest's house for a short time and that my Nan left school at age 14 to help out a sick family member in Placentia.  When they had dances they usually stayed up all night because it wasn't safe to walk home in the dark.  Though not always because I also learned that when Wayne's father proposed to his mother in the pew at the church they were on their way back from a dance in Clattice Harbour which was miles away and they were passing through the church in the early morning hours as a shortcut when they stopped and he asked her.  My Nan said, imagine that, walking all that way home in the dark after dancing all night! 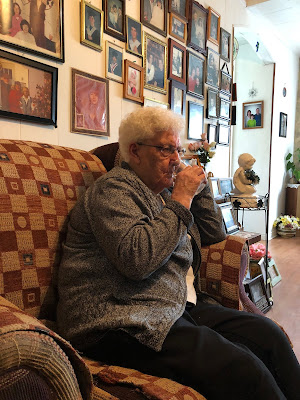 Nan even got to drink some of the spring water we brought over from St. Kyran's.  I had a sip too, it was delicious!

Today lovely Miss Nell turned 97 years old, she's lived quite a life, all of it in Newfoundland!