This past weekend I finally had the opportunity to check out Doors Open Milwaukee, something I've wanted to do for a few years now. 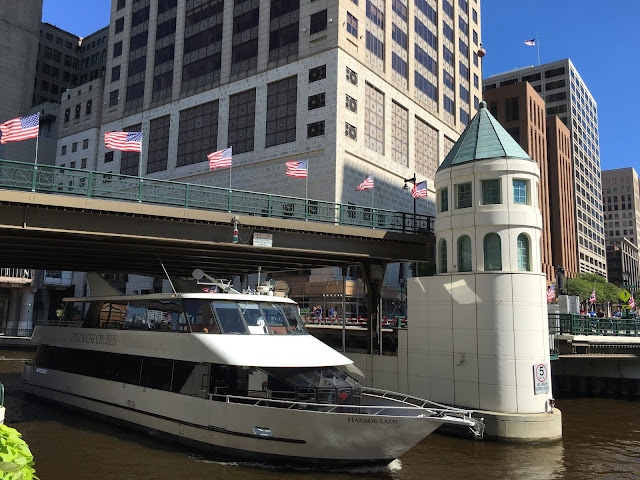 This year over 165 buildings were on the list of establishments who opened their doors to the public, and I wanted to get a look at some of the theaters that normally would require a ticket stub to enter. 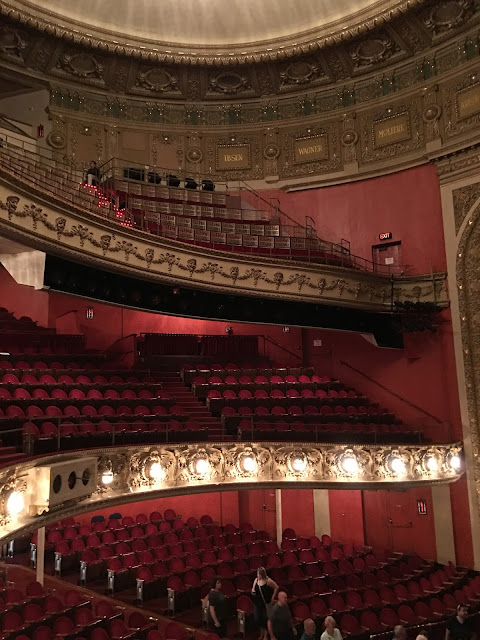 Built in 1895 the Pabst Theater is the 4th oldest continuously operated theater in the United States, designed after German opera houses with outstanding acoustics. 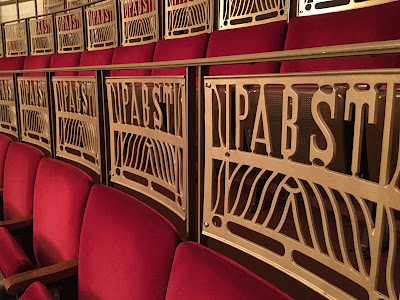 The gallery seats were pretty impressive, but I was charmed by the little statue atop the marble staircase. 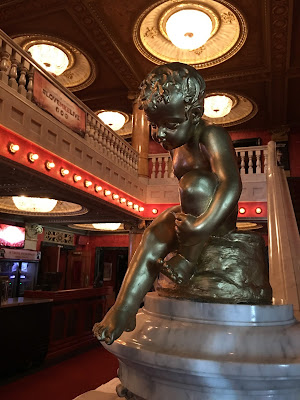 I also visited the Riverside Theater where I got to ride in an elevator with an attendant and listen to live organ music being played.  Built in 1928 it definitely had that roaring 20's ambiance. 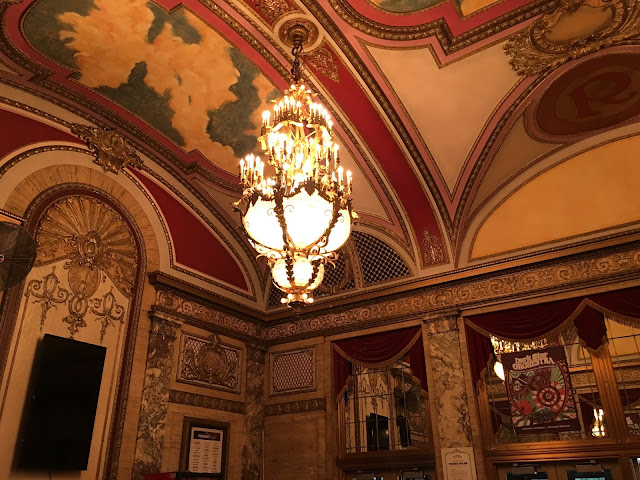 The Wisconsin Conservatory of Music is housed in a 13 bedroom mansion that was built in 1903 and I arrived in time to hear a very young lady playing violin in the recital hall. 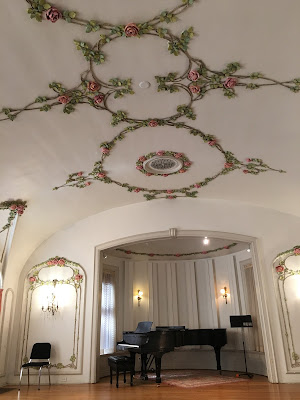 When I was scoping out the murals at Black Cat Alley I walked past the Oriental Theater so I popped in there for a quick look. 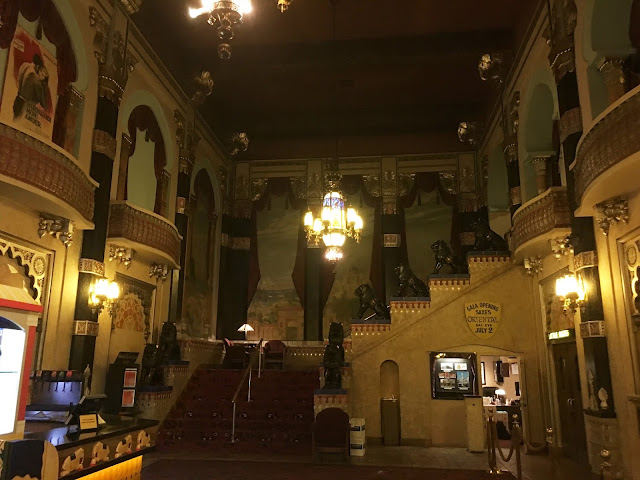 The lobby was quite a surprise, complete with elephants and lions!  The three theaters are just as lavishly decorated so I'm making a mental note to take in a show there someday. 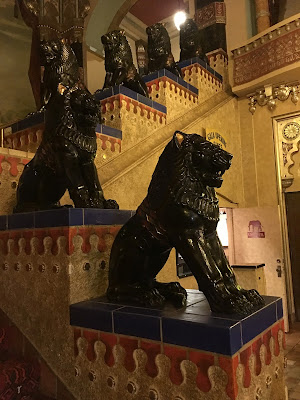 Built in 1927 as a movie palace the Oriental has seen a lot of history including live performances, and was the venue to see such acts as Iggy Pop, Laurie Anderson, INXS, Supertramp, Jay Leno, Blondie, Devo, REM, Tears for Fears and Milwaukee's own Bodeans, among others. The Pretenders lost their opening act one fateful day, so they invited three guys who happened to be regular performers on the sidewalk in front of the theatre to take their place. Such was the beginning of the Violent Femmes, whose Greatest Hits compilation pays homage to the Oriental.  I'm a big fan of the Femmes, and if you are too here is a link to their upcoming tour dates.


Also on the agenda was a trip to the MSOE Grohmann Museum which ended up being my favorite part of the afternoon. The building was originally an auto dealership in the 1920's and then a bank before it was renovated.  The glass atrium contains a mosaic floor and a ceiling mural but I don't want to spoil all the fun for visitors so you'll have to come see for yourself! 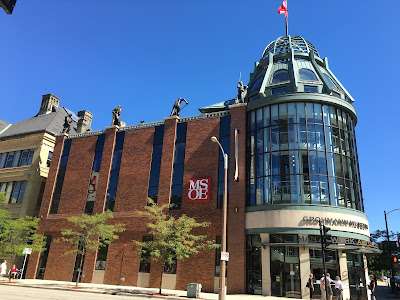 Like everyone else I came to admire the rooftop garden, but unlike everyone else I actually walked through the more than 1000 exhibits of artwork featuring "Man at Work".   The "work" encompasses everything from farming and mining to glassblowing and seaweed gathering. 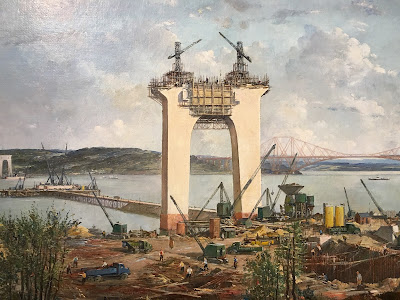 The section dedicated to roads and bridges reminded me of my recent visit with Linda in South Dakota so I took a picture that I hope she will enjoy! 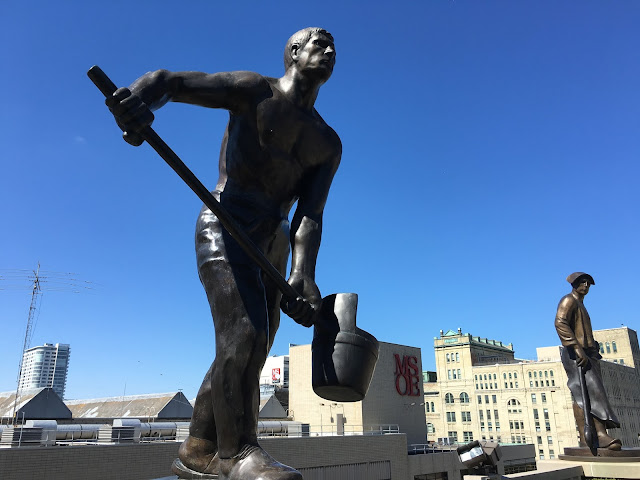 The rooftop garden with bronze sculptures of men at work seems fitting against the Milwaukee skyline.  After all it was workers like these that built this city.


During Doors Open MKE admission to museums is free.  Also free is walking along the river on a sunny day watching the bridges go up and down and the citizens enjoying a day of leisure.


Chicago has a similar event coming up in October which I hope to be able to attend. Who knows what sights and sounds I will uncover poking around the Windy City? 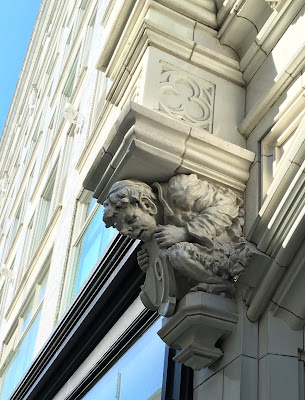