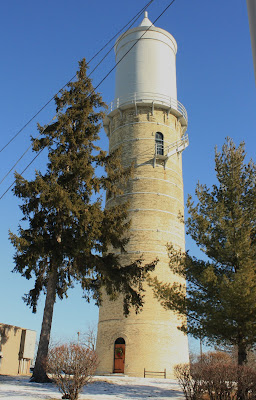 After leaving the Hoard Museum I saw an unusual shape against the sky and ordered my driver to investigate.  Wayne and I pondered it for a moment and decided it must be a water tower, even though there were windows.  Further investigation online tells me it was built in 1901 from limestone.  We were lucky to see it, as apparently it was slated for demolition 12 years ago and through generous local support it was renovated and saved.

The 78-foot-tall brick base of the watertower is roughly seven or eight bricks thick, while the upper portion of the base is about four or five bricks thick. The steel tank, which once held as much as 100,000 gallons of water, brings the overall height of the tower to 112 feet.   Steel bands were added to the structure in 1938 when stress cracks appeared in the tower's bricks and mortar. The historic tower was taken out of service in 1989.


I'm thinking about going back another day for a walk up the interior staircase to the top!

I happened to notice that every other thing in Fort Atkinson is named "Black Hawk", not to mention a few likenesses of the guy himself, so here's the skinny from the Chamber's website on why it's significant in Fort Atkinson:

In July 1832, General Henry Atkinson and his troops built Fort Koshkonong during the Black Hawk War. The war had begun a few months earlier when the Sauk warrior Black Hawk crossed the Mississippi River back into Illinois in an attempt to reclaim the Sauk and Fox homelands there. Soon General Henry Atkinson was hot on his trail, forcing Black Hawk and his people to flee north into what is now Wisconsin. By the time Atkinson arrived here, he was short on supplies and frustrated by his inability to find Black Hawk. So he halted his men and built a fort along the Rock River that would soon house the supplies being sent to him.

The impressive roster of Black Hawk War participants included future presidents Zachary Taylor, Abraham Lincoln and Jefferson Davis. It was the commanding general however, whose name was forever attached to our town when in 1841 congress declared us now and forever more to be called Fort Atkinson. 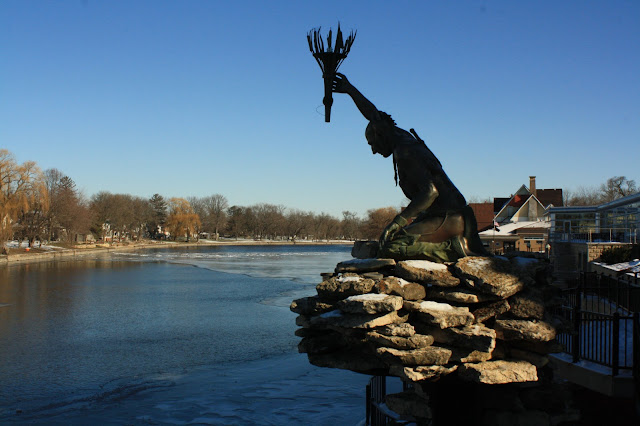 While scouting out the Rock River, we saw fishermen scooping up crates-full of carp and loading them into the back of a big truck.  We were afraid it was the dreaded Asian Carp, but the DNR website says they are not making their way into our rivers from the Mississippi...yet.  It's more likely other carp that is being removed to promote weed growth, increase the game fish population and improve the fishing for more desirable fare like walleye.  They have to get to the nets in a timely manner to not endanger other species, and the harvested carp is sent to fish markets across the country and across the globe. An article in the Prague Daily Monitor said that "in the days leading up to Christmas, it's nearly impossible to walk through Prague without running into a carp vendor."
Prague? Wow!

I found an article on the topic that reported on this happening on the Fox River and if I'm wrong that this is what is going on in Fort, please let me know! Read more here. The article goes on to compare carp harvesting on the Wisconsin rivers to the Midwest's version of Deadliest Catch, entailing expensive equipment, hard work and long hours but with big financial benefits. 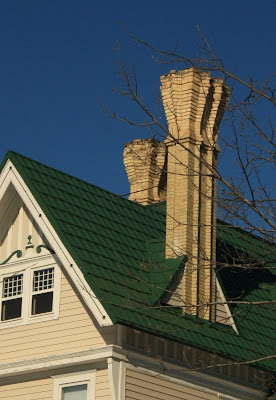 There were quite a few glorious turn of the century buildings, both in the residential and the business districts.  This one caught my eye due to the unusual chimney shape.  Another home on the same block had the same design.  I looked really hard but couldn't find anything online about decorative chimney styles.  Was this fluted chimney the whim of a local mason or something that was in vogue at the time?  Anybody with any knowledge on chimneys please chime in because I'm really curious! In the meantime, here's a great link on house styles.

Believe it or not, the building below used to house J.C. Penney!  Well, this one or it's cousin on the other side of Catfish Alley. Now it stands empty, but the giant catfish sculpture where another building was removed is there to keep it company. The buildings were built in 1886 from cream brick. They sure don't build them like that now, do they? 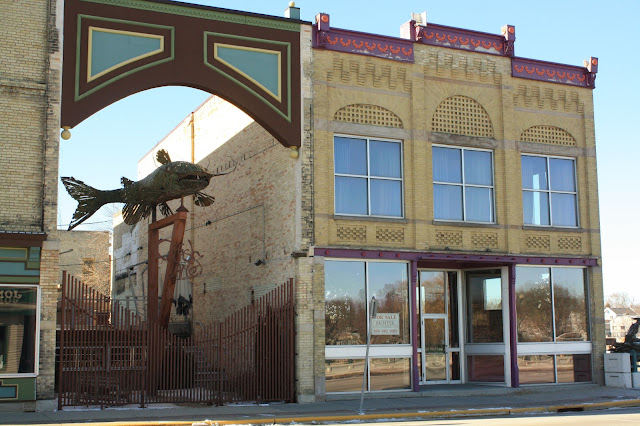 Also of architectural interest was this out-of-place charmer. Apparently it was originally the site of the Fort Theater and this new building incorporated some the of original Mediterranean Revival elements. Now it houses...public restrooms, on the lower level and storage for the Chamber above.  A parking lot graces the rest of the site.  See the smokestack reflection? 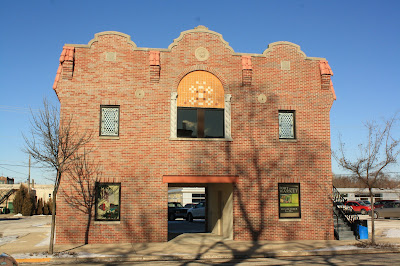 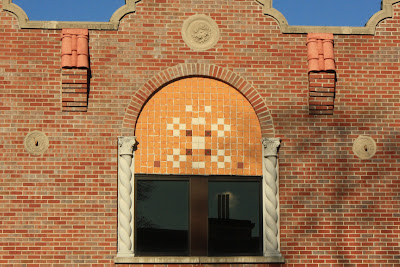 A little online searching found a snap of the original building.  I don't know about any of my fellow bloggers, but I find I learn and get just as much enjoyment out of coming back home to do my research as the actual "touring" day.

We stopped for lunch at Paddy Coughlin's Pub, and there will be more on that in another post because there were MURALS! For now, I'll tell you the meal was delicious, the server was friendly, and there was a sheep on skis....which Wayne swears he's SEEN BEFORE.  Really? First time for me, anyway. 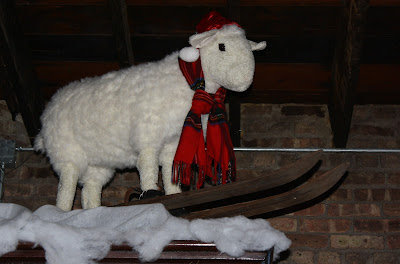 On our way out of town I got one more opportunity for a quirky find.  First time I've seen a wood stove converted into a mailbox, how about you?  It certainly added some interest to the farm's driveway and I don't think I'll forget it for awhile!  Fort was definitely a fun town. 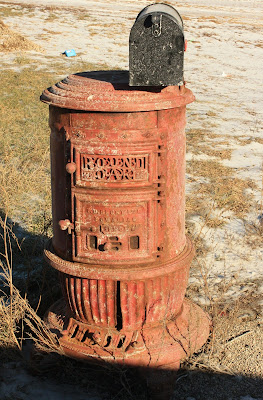