From Midnight Moonbow to Malicious Mischief

I stayed up even later than usual last night to catch the moonbow at Cumberland Falls.  Midnight found me bundled up in my winter clothes since it was only about 40F and I drove down and joined all the folks out to see it in all its ghostly white glory.


Now, photography in the dark is a tricky business, and one I have not mastered.  I did some research online and figured out what camera settings to use ahead of time but I still wasn't very successful. The more I tried the less I got, so the picture above was actually my first attempt and the only one I had any results with at all.  The picture shows some of the colors of the rainbow, but to the naked eye it was only white.  By the time I was done my coat and my camera were soaked and my fingers were frozen as stiff as popsicle sticks! 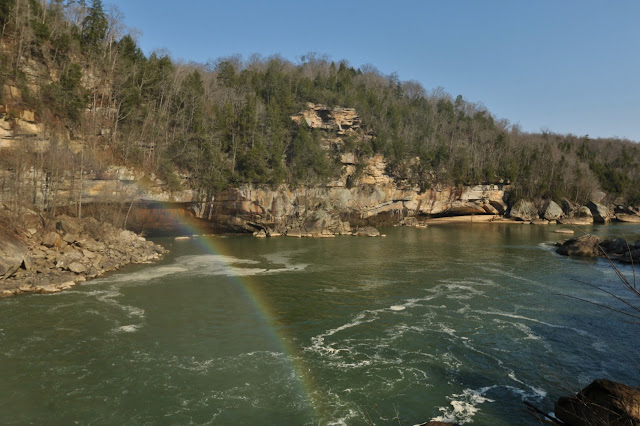 At 10:00 this morning the sun was in the same position that the moon was the night before and I got an easy-peasy shot of a rainbow and a nice view of the Cumberland River below the falls.  It was still chilly when I hit the Moonbow Trail but clear skies and sunshine had it up above 75F in no time and I was peeling layers like some kind of woodsy stripper.


The Moonbow Trail follows the river, and at the beginning I even got a chance to climb out on some boulders and get a last look at the falls. 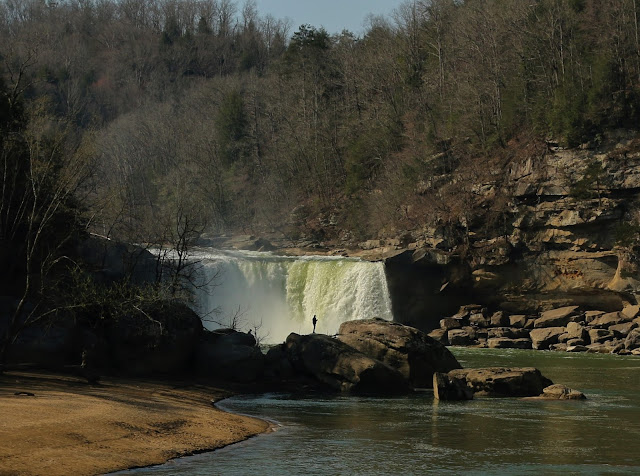 But first you have to climb down the set of 30-something stairs.  I held the rail and put my right foot down and then my left for each one.  They were pretty steep!  On the way back up I clutched the rail in one hand and bore down on my hiking stick with other, quads quivering after 5 miles of hiking. 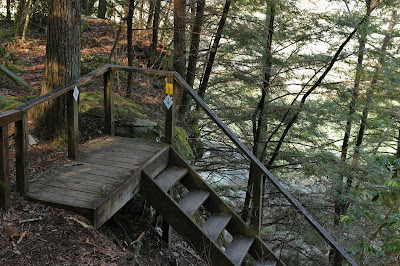 Just past those stairs you can get a view of Eagle Falls across the river.  I'm guessing once the trees leaf out that view will be obstructed. 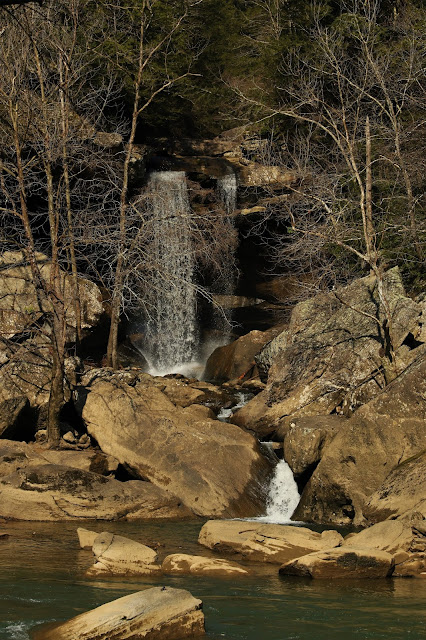 I was entertained for a short while by a family with two grade school age children ahead of me.  The boy was full of energy, running back and forth and then shouting, "I'll be in the front since I'm the fastest!"  It was a nice reminder of my own kids when they were that age.  Now I know why all those people used to say to enjoy them because the time goes so fast. 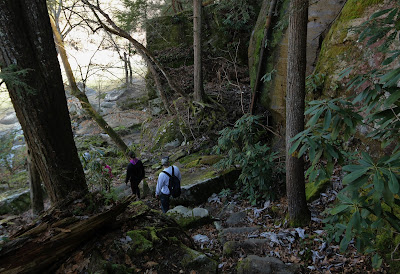 The trail meandered up and down, quite rocky and rough in some spots, level and spongy in others. It was one of the most diverse trails I've been on.  Even though the habitat didn't change there was lots to see including rhododendron, hemlock, boulders, the river and gigantic rock shelters. 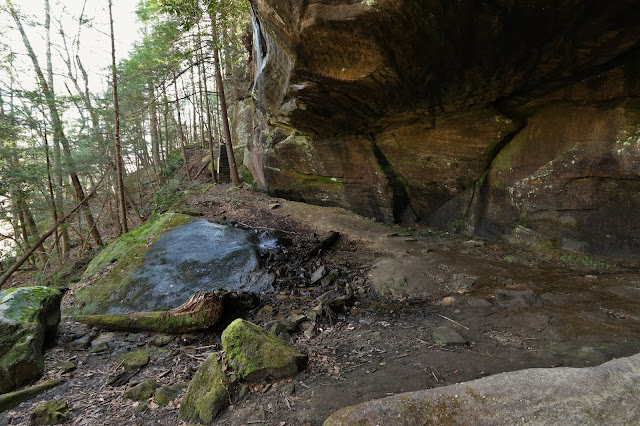 I didn't see any wildlife today, unless you count this snail. 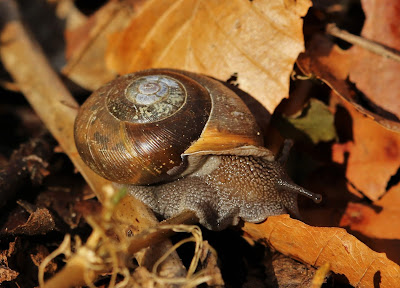 But I did find evidence that a beaver was probably in the area. 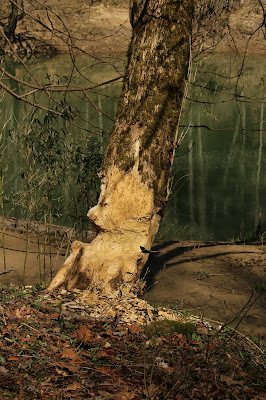 It would be a lot of work for a beaver to try to change the route of the mighty Cumberland River! 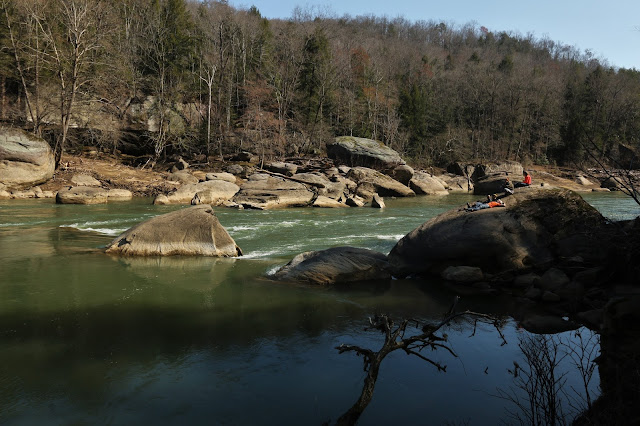 There is more than beavers and sun seekers along the river's edge, in spots some unsightly piles of garbage wash up with the tree limbs. 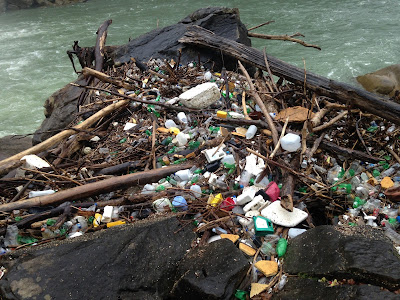 But my eyes were healed from the trauma of seeing man's impact on the river when I came upon a sunny hillside covered in early spring wildflowers! 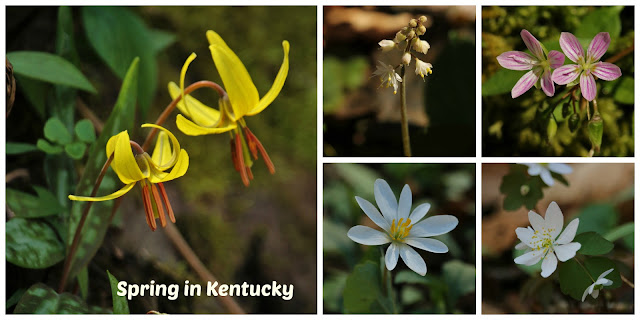 With so much to look at I had to stop a mile short of the intersection with the Dog Slaughter Falls trail.  I'm considering going back to it anyway to see if those otters are around and if I do I'll hike the last 2/10 mile that Sharon and I missed and the mile along the river I missed today too. 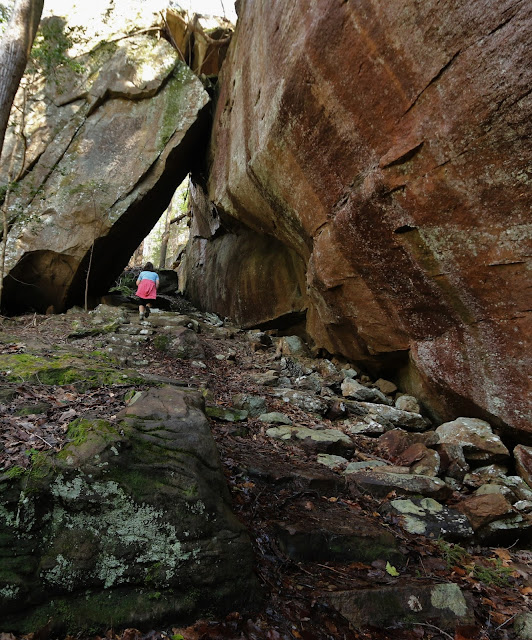 After my hike I had a quick shower and went to the DuPont Lodge to work on my photos.  An hour later I went back out to my car to discover this: 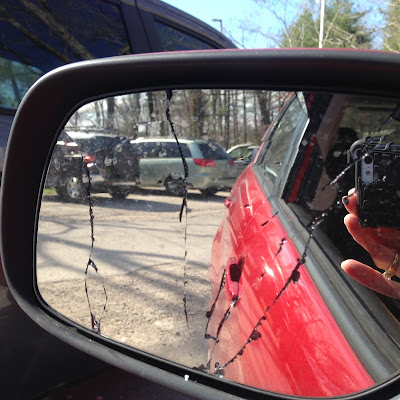 Honestly, what is wrong with some people?  Little slivers of glass were on the ground below the mirror so I went back in the Lodge to report the vandalism.  As I told the ranger who assisted me, luckily I had hiked over 5 miles so I was too tired and mellow to get angry.  He guessed the damage at easily under $200 so we wrote up a quick report to help them track crime in the park and I went on my way.  As usual I looked at the bright side and figured it could have been the window or a tire that took the brunt of someone's mischief.  Maybe my "I Stand with Planned Parenthood" window cling in my back window is a little too provocative and I should take it down when I travel in the south?
Posted by Pam at 6:21 PM