This post is a continuation of the story of the stops my daughter Katrina and I made
during our recent trip down to Texas and back to tour 5 Presidential Museums.

Stop number 2 in Little Rock was at the Arkansas State Capitol.  Construction of the new Arkansas State Capitol began just before the turn of the 20th century in July 1899 and the destruction of the old building as well as the construction of the new building was assigned to convicts from the nearby penintentiary.  Missouri architect George Mann designed the original plans for and oversaw the project until 1909. The work was slow with a series of delays brought on by cost overruns, budget shortfalls and even charges of bribery. The state eventually replaced Mann with renowned architect Cass Gilbert, who is noted for his designs of the Minnesota State Capitol and the United States Supreme Court building. 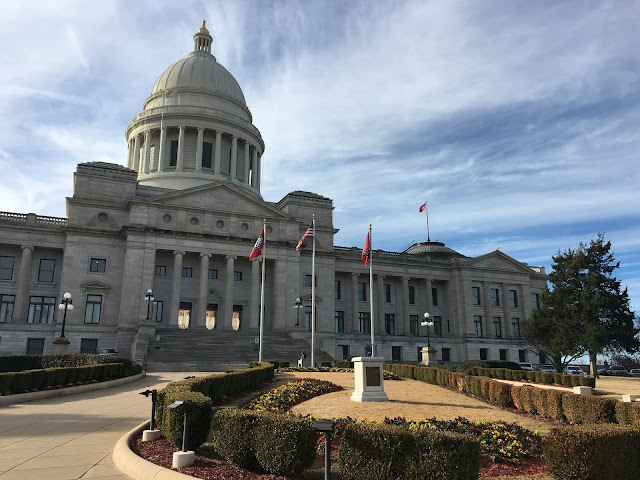 Hard, lustrous limestone from Batesville, Arkansas formed the exterior walls while a softer Indiana limestone was used for the dome.  The ball finial at the top of the dome is covered in gold leaf. 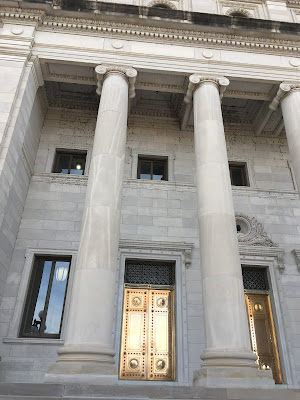 I was drawn to the 10 foot tall bronze doors which were purchased from Tiffany’s of New York in 1910 for $10,000.  In order to keep the uncoated bronze surfaces shining as the architect envisioned, the doors are polished by hand, inside and out, each week. The glowing doors served as the main public entrance for much of the Capitol’s first century, but since September 11, 2001, visitors have entered via the ground level tunnel doors through security stations. 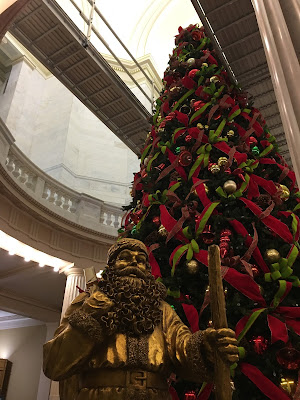 When we arrived they were in the process of dismantling the Christmas decorations.  I loved the Santa Claus and wish I could've taken him home with me.  I'm sure he cost more than I had in my souvenir budget though. 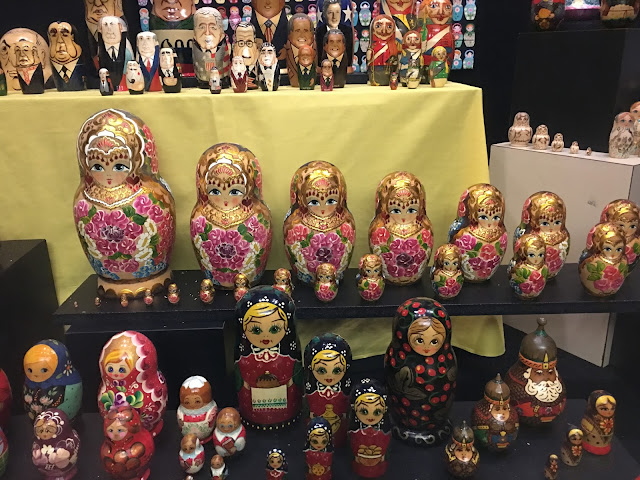 Also on display for the holidays were two cases full of nesting dolls.  Did you notice the presidential ones in the top row??


One of the unique aspects of this Capitol is the office of the State Treasurer which contains a vault secured by a series of four doors and three time locks.  Tours are given without appointment and stacks of heavy cash were hoisted out for our inspection.  The cash is actually there to cover payroll! 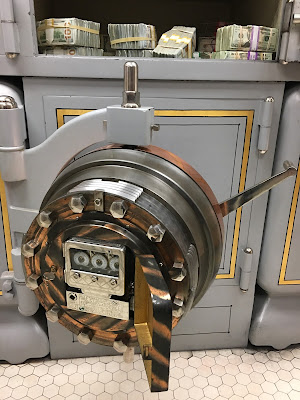 The new architect removed inferior building materials when he took over the building project and even many were upgraded including marble for the floors and wall panels that came from Vermont, the grand staircases were carved of Alabama stone, and elegant fluted columns were quarried in Colorado.  It is a beautiful building that felt warm and light as we walked through it. 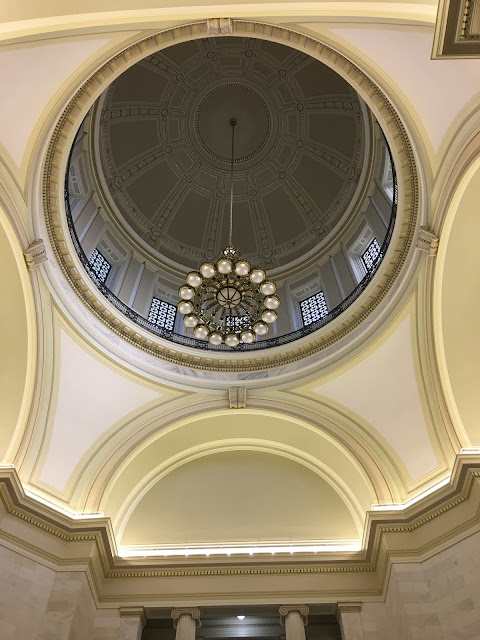 Suspended from the rotunda ceiling by a 73-foot chain, the rotunda chandelier weighs more than 4,000 pounds and is approximately 12 feet in diameter and 18 feet in height. This intricate piece of art was assembled using thousands of brass, copper, zinc, iron and glass parts. 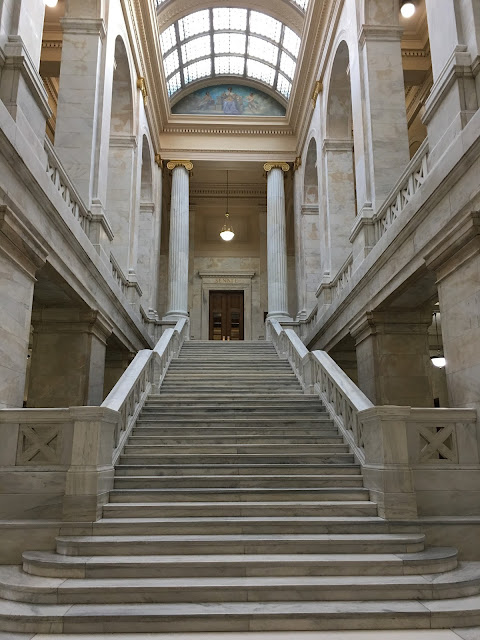 From the Arkansa State Capitol self guided tour guide: Above the grand staircases leading up to both the House and Senate chambers are four handpainted murals at the ends of the vaulted skylights. They remain the only public artworks commissioned for the building. The themes represented over the south Senate staircase are Education and Justice; over the north House staircase are War and Religion. These murals came from the studio of Paul Martin Heerwagen, a Bavarian-born artist and interior decorator from Fayetteville, Arkansas. 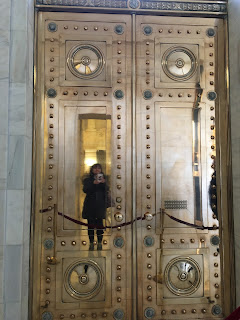 Unfortunately the murals were so high up I couldn't see them very well.  I did see myself reflected in the bronze doors though!  More posts to come, I'll get them out quickly because I have new things going on that I can't wait to share!