Along our way home we stopped in Little Rock for three reasons, and the first one was to visit Central High School.  When Katrina was studying at UW Eau Claire she went on a Civil Rights Pilgrimage that included a variety of stops and one of those was the Little Rock Central High School National Historic Site run by the National Park Service.

There are many great items in their gift shop and some stunning artwork on display as well. 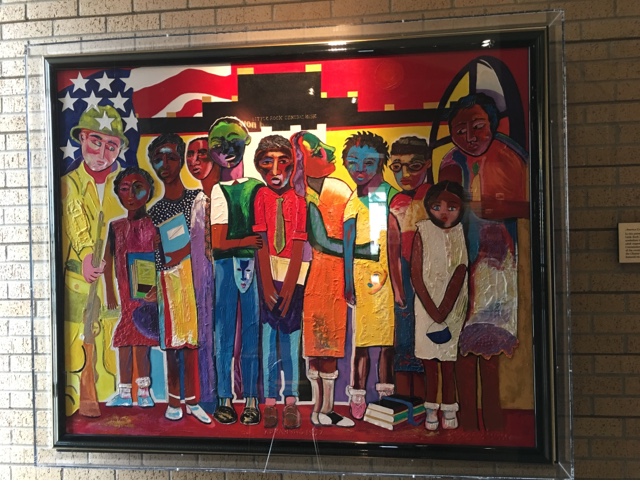 If you're not familiar with the story Little Rock's Central High School, now Central High School National Historic Site, was the location of an intense de-segregation battle in 1957  three  years after the momentous Brown vs. Board of Education decision. Katrina and I listened to a podcast in the car "Stuff You Missed in History Class" called The Aftermath of Brown v. Board that shed a lot of light on the subject before we arrived and I highly recommend it or any of the other podcasts they produce. 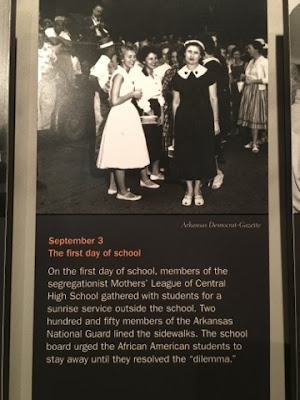 From the NPS website: Arkansas Governor Orval Faubus defied the court, calling in the Arkansas National Guard to prevent nine African American students, "The Little Rock Nine", from entering the building. Ten days later in a meeting with President Eisenhower, Faubus agreed to use the National Guard to protect the African American teenagers, but on returning to Little Rock, he dismissed the troops, leaving the African American students exposed to an angry white mob. Within hours, the jeering, brick-throwing mob had beaten several reporters and smashed many of the school's windows and doors. By noon, local police were forced to evacuate the nine students. 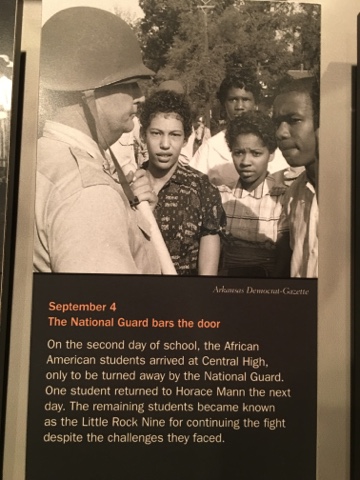 The battle for civil rights in this country didn't end with Abraham Lincoln, of course.  Since we've been talking about U.S. Presidents so much here's a quick run down on what they did for the cause: 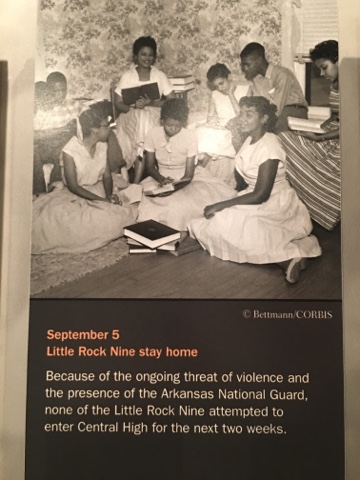 Back to our story of the Little Rock Nine: When Governor Faubus did not restore order, President Eisenhower dispatched 101st Airborne Division paratroopers to Little Rock and put the Arkansas National Guard under federal command with soldiers surrounding the school, bayonets fixed. 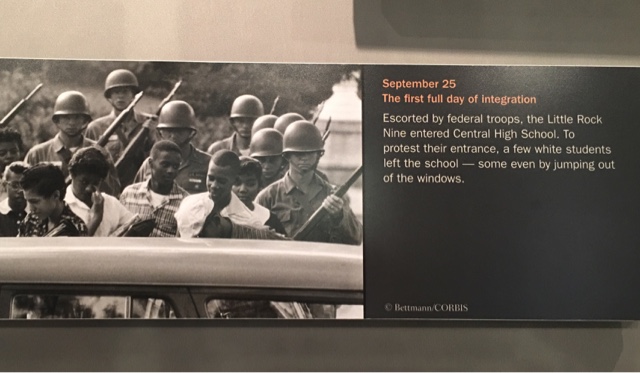 While on the Civil Rights Pilgrimage Katrina was fortunate enough to have met one of the students, Minnijean Brown who has spent years as an activist promoting minority rights in Canada and the United States.  She was very impressed with her and meeting her has made a lasting impression on her. Under federal protection, the "Little Rock Nine" finished out the school year though they were subject to extreme harassment and Minnijean was the first to be suspended and expelled for standing up to her tormentors. 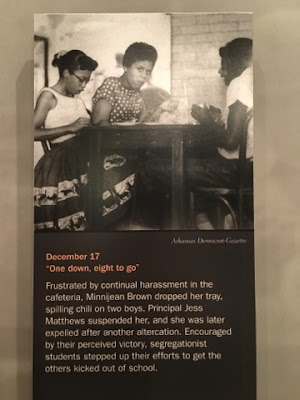 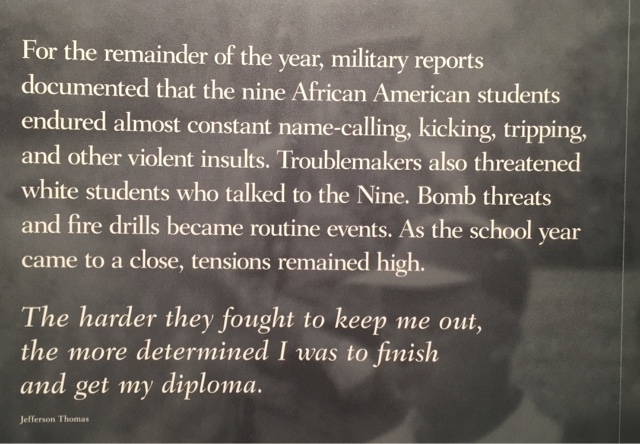 Want to know what happened to all those brave faces?  Here is a link to a 20 minute video of the surviving eight on a visit to Chicago where they received the 2015 Lincoln Leadership Prize from the Abraham Lincoln Presidential Library Foundation. 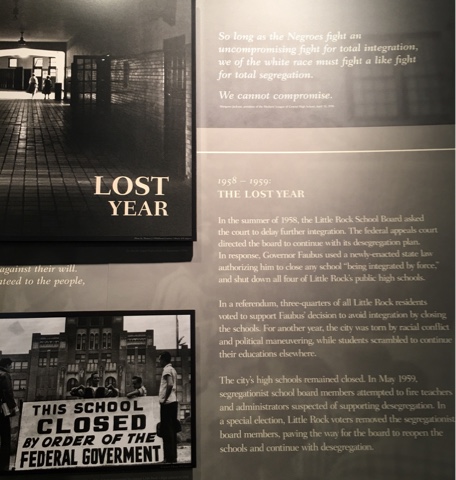 The most shocking fact of the battle for integration in Little Rock to me was that the following year Governor Faubus closed all the high schools, forcing the African American students to take correspondence courses or go to out-of-state schools.  I can't even imagine that!  The school board reopened the schools in the fall of 1959, and despite more violence - for example, the bombing of one student's house - four of the nine students returned, this time protected by local police.


The issue of segregation is still relevant today, believe it or not, and not just in the south.  Researchers define "isolated schools" as those with 75% or more of the same race or class and if you take a minute to think about how our neighborhoods and school districts are laid out you can see that this is obviously still an issue.  I've been mad for decades about the fact that schools in poverty stricken areas don't get the same opportunities and funding as other schools and Katrina sees it in her work with Girl Scouts when she visits the public schools as well. Personally I am always happy to pay my taxes that support schools (even though we home schooled most of our school years) and wish more attention was paid to quality education for all instead of  iPads for the elite.  Off my soapbox for now, have a great weekend!
Posted by Pam at 7:26 PM