From St. Anne's we sailed in to St. Kyran's harbor, past the Church of the Assumption which is decaying gracefully.  I turned to our Captain and said, "we're going back to the church, right??"  My grandmother and Wayne's mother were baptized in that church...that church was the prime destination as far as I was concerned!


But we'll leave that for another day.  For now we talk about the town itself, where the Whittles lived and even Wayne's parents lived after they got married.  Wayne's brother, Jim, told stories of his early years living in St. Kyran's; he was born out here, as were 3 more of Wayne's siblings before the family moved to Placentia.

Imagine my surprise when I showed the pictures to my Nan and she said, that's where our house was!  In the picture below their home would have been just to the right of the cellar visible in the center of the photograph.  This is why you have to just keep pressing that shutter button!


I'm trying to do a little genealogy homework and as I pulled up the census records I was surprised to discover that my Nan's mother, Hannah Mae, was actually from the outport of South East Bight.  How did she end up married to Jack Whittle in St. Kyran's? It would be a 4 hour walk according to Google maps...but there might not have been a direct route in 1925.

Sadly, Hannah Mae died young at the age of 24 from pulmonary tuberculosis, leaving behind 3 children.  When I checked the death certificates for the area and time period a large percentage of deaths were attributed to that disease which was highly contagious (a bacterium in the lungs that now can be cured with antibiotics).  Imagine sitting in church and the coughing you hear now could be a disease that they had no cure for at that time.

Her husband remarried as he needed someone to watch those children while he was out working across the bay.  Annie Whittle, my grandmother, was only 5 years old when her mother died and has no memory of her.  Hannah Whittle died three months after her youngest was born, having never left her bed after giving birth according to my grandmother.  No one alive remembers anything about her and there are no photographs, but maybe I will try to find her people out in South East Bight and see what I can discover.


I discovered on this trip that those who had left BEFORE Resettlement still retained their land as they did not sell it to the government as part of their leaving agreement.  Jack Whittle took his home apart and sailed it across Placentia Bay before Resettlement, something I cannot even imagine after making the journey.  (I neglected to mention in the previous post that I was actually quite seasick on the boat over, perhaps I was trying to forget?  The motion was only part of the problem, the diesel fumes and noise aggravated everything and on top of it all I was very cold as I stayed outside to try to get fresh air.)  Anyway, many floated their home still assembled, but if I have the correct information my great-grandfather Jack Whittle took their home apart and re-assembled it.


Once moored we boarded the orange zodiac we had towed behind us to explore the Leonard homesite.


Notice everyone is wearing their life vest except for me. 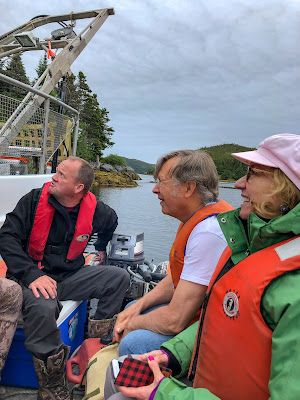 John Judge stayed behind to mind the Royal Breeze. 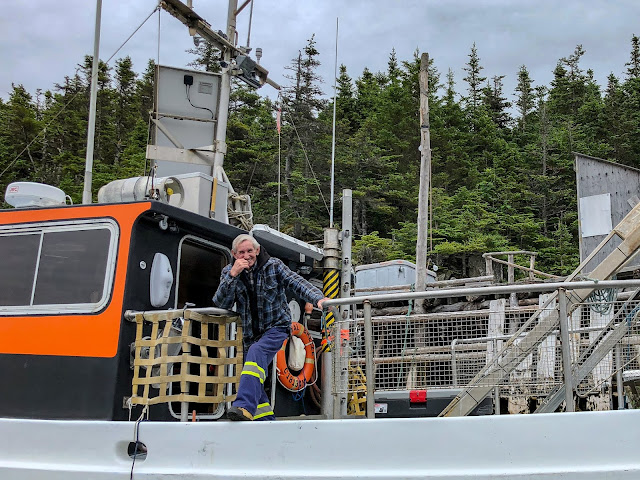 Are we there yet?


Thank goodness we had "Young Tommy" along with us to haul us up on shore, although he was quick to remind us that he really isn't young anymore as he is closer to 40 than 30 these days. 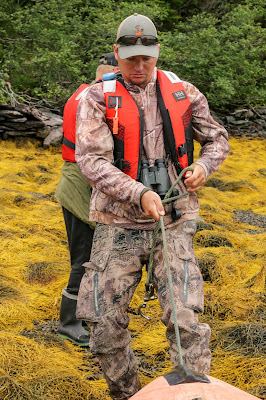 The tide was low which gave us room to move around since the area is grown in with trees where there used to be homes.  A spring flowed through the property, and Jim told us the story of how he remembers watching a house across the way burn to the ground when he was 10 years old.


He also had a picture with him from when he was small and efforts were made to recreate the scene.

I missed all the details and had to ask later because I was too busy wandering around...I'll share some close-ups in the next post!

Crossing the Bay - Resettlement Part 1
Posted by Pam at 9:32 AM

Email ThisBlogThis!Share to TwitterShare to FacebookShare to Pinterest
Labels: Newfoundland