Wayne followed me up to Eagle River last week, where we stayed at the Chain O Lakes Campground. The campground is mostly seasonal sites, but not bad for that kind of place.  I'm still just a state park kind of girl and of course I grumble constantly when we stay at these kind of places.  Poor Wayne has to put up with a lot from me, don't be fooled by my easygoing appearance! 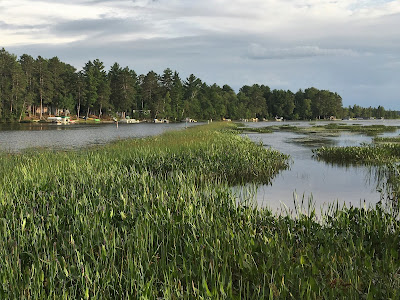 I forgot to take a picture of the campground, but I did get one of the lake.  Wayne was impressed with the lakes themselves, and spent his time daydreaming about spending a summer up there boating and fishing.  By himself, I assume, since I would lose my mind from boredom! 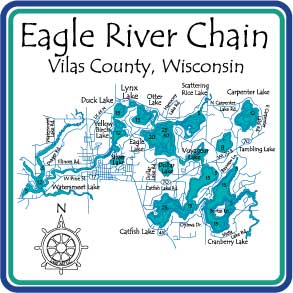 Between appointments in Eagle River and Minocqua I stopped at Awassa Trails in St. Germain for a 2 mile walk in the woods that did a lot to improve my mood. 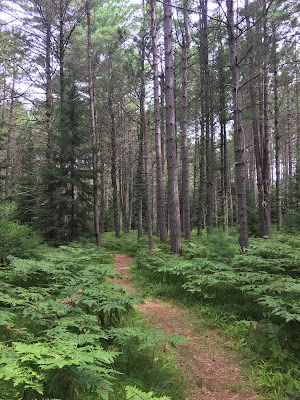 Art always improves my mood, and I even got to enjoy some in the Marshfield Clinic in Minocqua while waiting to talk to a potential customer. The painting is titled Nanabozhoo Dancing with Eagles and was created by Rabbett Before Horses Strickland. 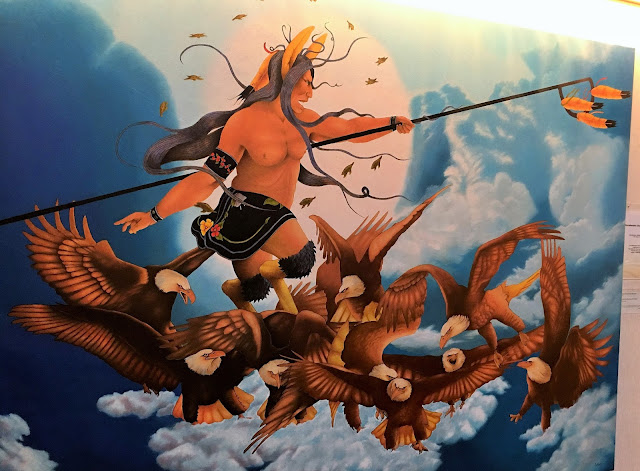 Stories about Nanabozho (spelling varies by region) vary considerably from community to community. Nanabozho is usually said to be the son of either the West Wind or the Sun, and since his mother died when he was a baby, Nanabozho was raised by his grandmother Nokomis. In some tribal traditions Nanabozho is an only child, but in others he has a twin brother or is the eldest of four brothers. The most important of Nanabozho's brother figures is Chibiabos or Moqwaio, Nanabozho's inseparable companion (often portrayed as a wolf) variously said to be his twin brother, younger brother, or adopted brother. Nanabozho is associated with rabbits and is sometimes referred to as the Great Hare (Misabooz), although he is rarely depicted as taking the physical form of a rabbit. Nanabozho is a trickster figure and can be a bit of a rascal, but unlike trickster figures in some tribes, he does not model immoral and seriously inappropriate behavior-- Nanabozho is a virtuous hero and a dedicated friend and teacher of humanity. Though he may behave in mischievous, foolish, and humorous ways in the course of his teaching, Nanabozho never commits crimes or disrespects Native culture and is viewed with great respect and affection by Anishinabe people.  Here is a link to some of the stories and where I found this information.